Home
Television
How Do Moonshiners Get Away with Their Operations? 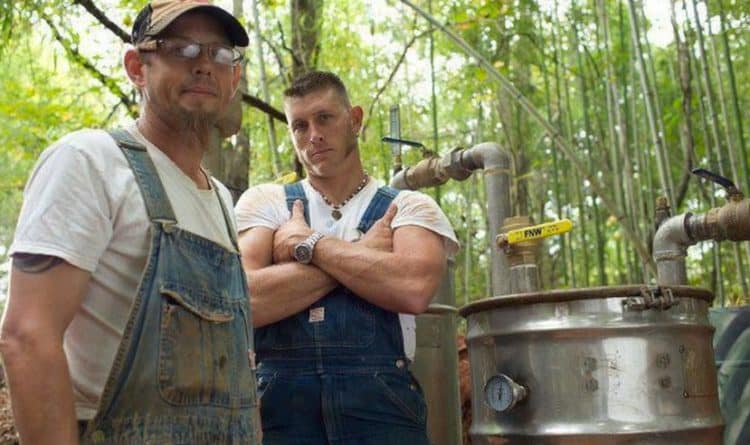 There are a lot of people out there who have wondered about how Moonshiners has managed to remain on the TV screen. After all, while the production of moonshine has been legalized so long as interested parties have secured permission from the relevant authorities, the show claims to be about illegal moonshiners. Due to this, while there are plenty of people who just enjoy Moonshiners without thinking too much about the fine details, there are also others who can’t help but mull over said questions.

Is Moonshiners Real or Fake?

Perhaps unsurprisingly, there are differing claims for how Moonshiners has managed to remain on the TV screen. First, the cast of Moonshiners claims that they have been getting away with making illegal moonshine on the TV screen because they need to be caught in the act of making illegal moonshine for the charges to stick. Based on their logic, this means that the footage shown on Moonshiners doesn’t count because it shows something that has already happened rather than something that is in the process of happening.

Meanwhile, the Virginian authorities have stated that Moonshiners doesn’t actually contain any footage of illegal moonshine production. Instead, the show has nothing but dramatizations of such processes, meaning that it can’t step in because it needs a reason to step in. Furthermore, the Virginian authorities have stated that they have sent a request to the producers of Moonshiners to add a disclaimer for more accuracy, which was perhaps unsurprisingly, ignored.

Due to this, it is a matter of choosing whether to believe the side that has strong financial incentives to make it seem as though they are making illegal moonshine without actually making illegal moonshine or the side that has been provoked to some extent but still hasn’t stepped in. On top of this, there are plenty of other reasons to believe that it is the latter rather than the former that is telling the truth.

For example, most of the people featured on Moonshiners have the relevant licenses for making alcohol, meaning that their claims of being illegal moonshiners sound more than a bit hollow under such circumstances. Furthermore, it should be mentioned that while the producers of the show might not be held responsible for the supposed crimes that are being committed if they do nothing about film the processes, the same can’t be said if they are actually incentivizing the supposed crimes that are being committed. Since the producers of Moonshiners are paying the cast members, it is not difficult to imagine what would happen to them if they were actually filming illegal moonshine production. On top of this, it should be mentioned that the original pitch for Moonshiners was about legal moonshine production, which was soon dropped because it would have been too boring for the TV screen. Combined with the fact that the production company behind Moonshiners is known for making other unscripted shows of dubious veracity, it seems very, very likely that the relevant decision-makers just decided to go for the pretense of illegality to make the whole thing seem more interesting to its intended viewers.

Meanwhile, one can’t help but suspect that the Virginian authorities would be taking the whole thing with much more seriousness if they had cause to believe that something illegal was happening. After all, they have been bombarded with letters asking why they hadn’t done anything about the illegal moonshine production that was been shown on the TV screen, which is why they issued the statement about the show being fake in the first place. As such, if Moonshiners was indeed showing illegal moonshine production, it seems very, very likely that the Virginian authorities would have already moved in to shut down a source of embarrassment. Something that is particularly true because the people behind Moonshiners actually misled them about the nature of the show at the start by telling them that the whole thing was supposed to be a documentary about moonshine making rather than what it actually turned out to be, which is why the authorities haven’t been involved with the making of the show since then.

Summed up, it is theoretically possible that the cast of Moonshiners is being truthful about how they are getting away with everything. However, unless people enjoy throwing away money, they probably shouldn’t bet on that particular claim.