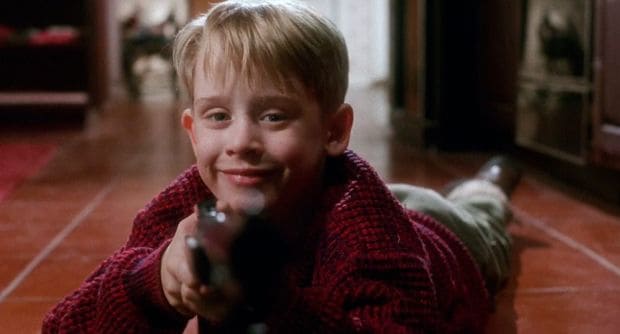 There’s a good case behind why it’s so easy to say that Home Alone is a messed up movie for people that watch it as adults. Do you recall watching young Kevin McCallister defending his home from two grown thieves? You know, the guys that should have been corpses after a couple of the booby traps that a young kid somehow unerringly rigged in a matter of about an hour or so? Really, think about all that happened in the movie and how he was able to do so much damage to two grown men without so much as a lick of knowledge on how to pack his own suitcase.

First let’s get down to the matter of his family. They’re horrible to him to start with. Yes he starts a fight, yes he causes a huge mess, and yeah, he is kind of a little jerk at some points. But no one talks to him in anything but a condescending tone and he can’t go to his siblings for advice or compassion because they’d rather rough him up or berate him like he’s the biggest mistake in the family. Then his Uncle Frank is such a jerk that he can’t seem to stand the sight of Kevin much less to be nice to him. His aunt is perhaps the only person that shows any decency towards him and that’s not saying much since she’s so wrapped up in her own business.

In fact the only time that Kevin’s parents show any remorse towards how they treated him is when they realized that they actually left him at home and are unable to turn the plane around to fly back.  Yeah, as another passenger on the plane I’m sure I’d say “oh sure, let’s turn back so you can get to your kid”. I hate to say this but I’d ask the parents just what the heck they were thinking of when they left their kid in the first place. Here’s an idea, have an adult that’s actually paying attention do the headcount instead of a teenage girl that thinks its something of a bother to even be asked.

One thing I’d like to know since this didn’t quite click with me even as a kid. I loved the movie, still do, but the idea of Kevin being able to outsmart and outwit two grown men even if they aren’t that bright is kind of hard to fathom. It’s a movie, I get it, and I’ve said this to people on occasion. But aside from the insane amount of damage his traps dish out, wouldn’t two adults eventually stop to think that instead of blundering through a home they know little if anything about, which would possibly entail walking through more traps, that it would be better to find another way through the home? After all, not every room in the house had doors leading in and out.

Plus, determined thieves would be more likely to just break in without talking as much. But again, it’s a movie, and that’s why things are the way they are. You’ve got to have a little comedy and a bit of drama to make it entertaining.