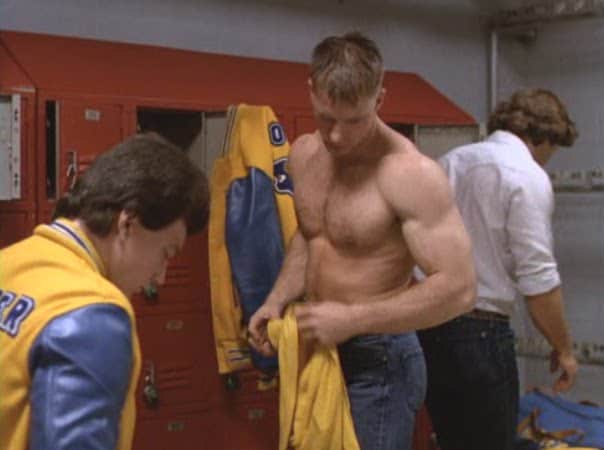 Do you recall the movie Vision Quest? Well it turns out that Brian Shute wasn’t 168 in the movie, he was more like 189. The actor that portrayed the state wrestling champ was Frank Jasper and he was a monster of a man when he was selected for this role. He was working as an athletic trainer at Eastern Washington University when a wrestler he’d been helping out mentioned that he was an extra for Vision Quest, and that they were looking for a person six feet tall and who knew how to wrestle. Jasper thought it might be worth a shot to be just another wrestler in a movie and so made his way to where the movie was being shot.

Once he read the lines he’d been given and showed off his skill the casting director was so impressed that she took him to meet the director. Later on he was introduced to the producers, who were also very impressed. After that he had to wrestle one man for the part since two others that had been selected didn’t work out. He beat out the other guy and became the man that the director wanted for Brian Shute, the main antagonist in the film. From that point on however the real work began.

Jasper was well over two hundred pounds going into the audition, but he was almost pure muscle since he’d been training as a bodybuilder. He had two and a half weeks to drop down from 215 pounds to 189. If you think it’s easy go on and try to do it, because cutting weight is a hassle that even wrestlers know is never that easy. I’ve seen wrestlers do anything and everything they can to cut weight, which includes wearing trash bags under their clothes and exercising at all hours of the day when they’re not in school, working, or otherwise occupied. Wrestlers cutting weight is a common thing during the season and is an intensive ordeal that forces the body to shed pounds in what might seem like a ridiculous fashion to anyone else.

The worst thing for Jasper was that he was called back a few different times after shooting so that the director could get other shots that he needed for the film. The bad part about this was that each time he’d shot up to over 200 again and had to shed the weight once more. It was a back and forth type of thing until finally during the last shot Jasper was allowed to maintain his weight since he wouldn’t be featured in his wrestling gear and could therefore hide the weight gain pretty easily.

When asked about his time on the set Jasper looks back fondly and says that it was a lot of fun and was a very memorable time. “It was an interesting process to film,” is how Jasper puts it, and throughout every scene you can definitely see how it could be viewed as something extraordinary in anyone’s life.