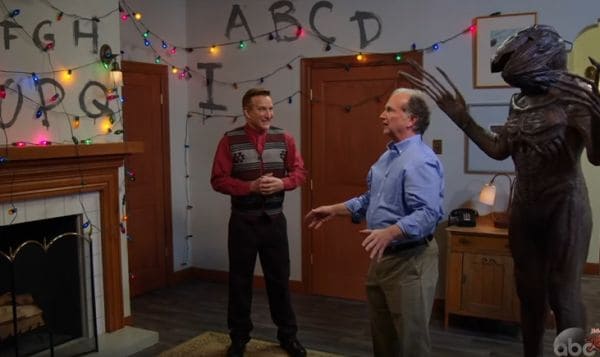 You had to see this one coming. Stranger Things season 2 has been getting mass attention and it shows in the number of different spoofs that have been popping up. The good part is that most of them are pretty funny and like this one bring back those blasts from the past that we loved when they were still on the tube. Perfect Stranger Things is something you can only roll your eyes at and grin since the fact that the show does deal with everything 80’s Balki and Cousin Larry were bound to show up at some point.

The use of the Demogorgon in this spoof was pretty funny to be honest and a little gross in some regards, but mostly funny. You’ve got to figure as a roommate the Demogorgon would be a little hard to get along with even in a spoof, but at the very least you wouldn’t have to worry over home invasions that much. That being said I kind of wonder if the Demogorgon might eventually ask Balki and Larry if he could have another of his buddies, the mind flayer, over for cards or drinks one night. Can you imagine that mess?

Plus, one thing I’ve been wondering about since the second season introduced the dog-like creatures that look like the Demogorgon aside from running about on four legs. Are they a different evolutionary creature than the Demogorgon, or are they just the form that the creature takes before it assumes an upright form? This is interesting, need-to-know stuff since if you recall Dart came from something that looked like a slug and then became a tadpole and then finally became what it eventually died as. But if it kept feeding would it have eventually reached the same stage as the original Demogorgon?

I find that to be a very intriguing question.

Anyway, getting back to the mashup. Perfect Strangers debuted in the mid to late 80’s and was saying goodbye by the early 90’s. It was a very funny show and had a lot of fans but it kind of faded out after a while. There was only so much of Balki and Larry that people could take and the story didn’t appear to be going anywhere. Many years later it seems that someone had an idea to create a mashup of a popular new show based in the 80’s and Perfect Strangers, and it’s a great mix to be honest even if hardcore fans might look at it and then turn away in disgust. Some folks want their shows to remain apart and untouched by any other sitcom.

But personally I thought it was pretty funny. The humorous part of it and the appearance of the boys made it even better I think. I kind of wonder how someone came up with the idea of Perfect Strangers, because honestly there were a lot of popular shows in the 80’s to choose from. Maybe this was the only pair they could get at the time or maybe they had a soft spot for the show, who knows.

It was a good bit of laughter, that’s what matters.