Home
Movies
Hey You Guys! Monopoly Gets a Goonies Edition 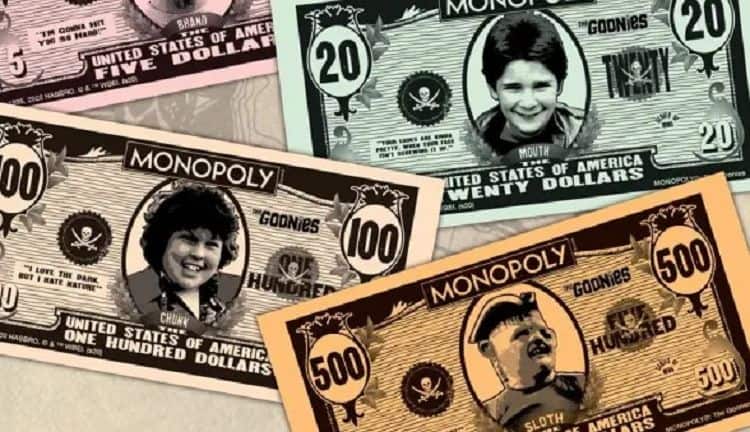 Monopoly has had plenty of different versions that have come and gone throughout the years, everything from the classic style to TV shows and movies, even to college-themed games that would be nice in an alumni’s personal collection. But Goonies Monopoly would definitely be a great game for any diehard Goonies fan since the detail put into this game is nothing short of great. From the money featuring the images of the stars to the metal game pieces and even the Hey You Guys and Never Say Die cards this is the kind of board game that a lot of fans could enjoy since the different locations in the movie is what the players will be buying, and the railroads being replaced with Data’s inventions is classic. While it might cost a bit on Amazon it’s still worth it since The Goonies is still a fan favorite that a lot of people continue to talk about in this day and age. The likelihood of a sequel has kind of come and gone, as this time around it would need to be focused more on the kids of the Goonies, but so far nothing has really come of it. There are even some that are of the mind that the iconic movie couldn’t even be made in the same way since some of the content from back in the day was a bit problematic.

That’s true really since there are a few scenes that drive people nuts when it comes to really explaining them, such as Mouth terrorizing the maid by misinforming her about what Mrs. Walsh wants her to do with the house, or the statue of David and the upside-down penis, or even the fact that Chunk belts out an expletive while watching a police chase and is then forced to do the famous Truffle Shuffle before being let into Mikey’s home. Some people are still up in arms about the Truffle Shuffle, but personally I think it’s more impressive that Jeff Cohen was sick at the time and stuck around just so he wouldn’t be replaced. That was a kid that wanted to be in the movie and wasn’t about to muck it up. Plus, Troy being a bully, trying to look down Andy’s shirt, and running Brandon right off the road after he stole a little girl’s bike to go after his brother Mikey, all of it would likely be put on the chopping block for any movie being made today.

The game itself looks like fun since it’s not much different than Monopoly, except that avid fans might find themselves quoting the movie a few times throughout a game and talking about the movie in fond ways as they pick up one card after another. Obviously the same rules of Monopoly apply since the game isn’t that different, but the ultimate goal, of course, is to find and own One-Eyed Willie’s treasure, as it was in the movie. It does beg the question as to whether the traps have been worked into the game somehow since the Go to Jail function might have to be replaced by something, or take on a different meaning if the Fratelli’s are in this game in any way. But the game pieces are fun since there’s the statue of David, Willie’s eyepatch, a doubloon, the little girl’s bike, the skeleton key that once belonged to Chester Copperpot, and the skull and crossbones from the beginning of the movie. Obviously whoever put this game together was thinking left and right as to what to add in since there’s even a mortgage payment space, which is important since the Goondocks were under threat of being sold since no one could afford the mortgage any longer and it was being bought up by a rich snob from Astoria, Troy’s father no less.

It goes without saying that this looks like a fun game and a great collector’s item for a lot of fans since it’s one of those pieces that can be kept in the wrapper and admired on a shelf, or it can be opened and used and still seen as a valuable piece since it’s capable of bringing such enjoyment. It’s kind of saddening to realize that a lot of people these days don’t remember or don’t know about The Goonies since as an 80s movie it’s either being slowly forgotten or being picked at by PC culture and being told ‘that kind of movie couldn’t be made today’. That’s kind of funny when it’s heard since it would appear that some folks don’t take a good look at some of the material that kids are being exposed to in this day and age. But as far as the game goes it’s a good bit of fun and it might be a way to get a new generation interested in The Goonies.