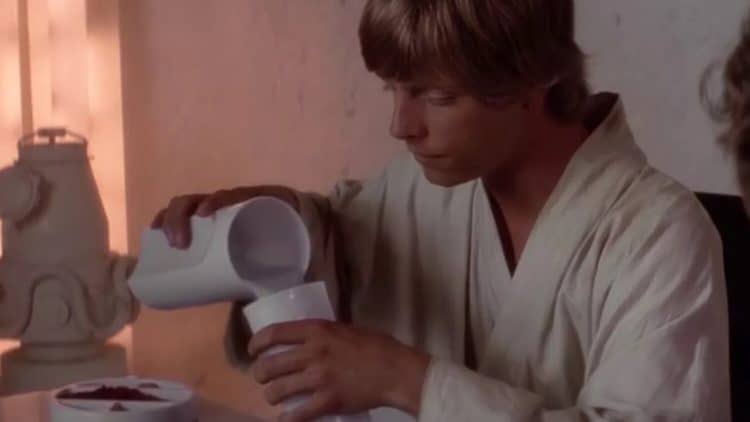 There aren’t a lot of people that would look at blue milk and say ‘yum’ but when talking about the milk from Star Wars it’s pretty easy to make your own, unless you go this route and need to ingredients that you might not normally use. This guy is making a video however so you had to know that things were going to get a bit silly. Really if you want blue milk just take regular milk, add a bit of sugar and food dye and you’d have it. Things aren’t this complicated and working with liquid nitrogen isn’t as simple for those that have never done it. Plus, learning where to find the ingredients isn’t all that difficult but learning how much to use and what proportions to use them in is bound to be just a little difficult at first since some things only take minute amounts to create an effect. Something makes it feel as though this guy is over-complicating things just a bit but again, for his show and his channel this is kind of what he does and for those that enjoy watching and enjoy the challenge of trying to replicate whatever he’s doing it makes sense. Bea Caicoya from CBR has more to add on the matter.

The blue milk from Star Wars was actually supposed to be bantha milk, which was found on a few different worlds and used in a variety of ways. If you’ll recall, bantha’s are those big, shaggy beasts that are seen to wander around Tatooine in A New Hope and are ridden and cared for by the Tusken Raiders. The thought of trying to milk one of those creatures is kind of hard to imagine but at the same time it seems to have produced a product that Disney feels is marketable. In real life though the drink is apparently plant-based and non-dairy so as to not upset or cause any distress to those that are lactose intolerant. This also makes sense considering that the ‘milk’ being created is something that can possibly last a bit longer and not spoil that quickly so it’s bound to be far more useful in the long run as a desired item on the menu at Galaxy’s Edge in Disneyland, one of their newest and most popular attractions. It does sound a bit sweet and a little odd if you’re not used to it but it also sounds like something that might sell rather well to those that want the experience and are willing to spend a good amount for such a thing. If you’ve been to Disneyland then you know why everything is so glamorous, and that’s because it’s so expensive.

It’s funny to hear Mark Hamill tell it since according to him the blue milk that was used for the movie was absolutely horrid but he drank it anyway since he didn’t want George Lucas to go looking for someone else to fit into his role because he was too picky. Give credit to Mark for being the kind of guy that would suffer just a little for a role since gagging on anything that doesn’t taste good is the mark of an actor that wants to be there and won’t let a little discomfort stand in their way. It is interesting to think now though just how many people throughout the history of show business have eaten, drank, smoked, and inhaled whatever substances on camera have been thinking while doing it. Some experiences probably aren’t so bad despite how they’re made to look, while others have reportedly been a nightmare to get through either because of taste or simple appearance. Blue milk is probably one of the least problematic substances that’s ever appeared in a movie and in real life it does appear kind of dodgy but at the same time with the right ingredients it doesn’t sound too bad. In slushy form this is the kind of drink one might think about having on a hot summer day when in need of something cool and refreshing. Robert Niles of Theme Park Insider gives a little more information on this subject.

There are likely a few different ways to make blue milk but the video above is probably one of those that people would pick the most largely because milk, actual milk from cows, is something that can spoil rather quickly and isn’t enjoyed by a wide number of people these days. For a long, long time it was a beverage, and it still is really, that a lot of people enjoy and find to be beneficial, but as more and more people have become lactose intolerant throughout the years alternatives have been necessary and have been steadily growing in number. Blue milk can be made from actual dairy milk or the alternatives, it just depends on what a person wants and of course when they’re going to drink it. As for Disney, they’ve found a way to make it marketable, go figure.