Home
Television
Hellcats
Hellcats 1.04 “Nobody Loves Me But My Mother” Recap 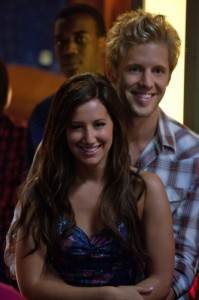 Dan and Savannah have date number two, this time in sunshine and without alcohol in the mix, where they play movie trivia with each other. Right after a kiss ensues, Savannah’s parents interrupt and Dan gets introduced as her boyfriend, much to the surprised look on Dan’s face. The strain between the family is obvious as words are short, but Savannah’s dad invites them for dinner. As they head back indoors, she confides in Dan that she hasn’t had dinner with her family in almost a year. Dan admits that he’s not exclusive and Savannah lies and admits that she’s fine with him seeing other girls. She’s a better liar then she lets on.

Savannah tells Dan that he doesn’t have to go to the dinner, stating that news of a casual relationship would make her mom’s head explode, but he convinces her that it’s for the best. Once she leaves, Marti confronts him on the ‘exclusivity’ talk and she threatens him, saying she’ll ‘take a little off the bottom’ if he crushes her roomie’s heart. Ouch!

At dinner, things seem to go well, with everyone talking to each other and Dan being a charming gentleman to Savannah’s family. So far so good, right? In the kitchen, her mother apologizes for pushing her out and then starts in on Dan, saying she doesn’t like him. She points out that Dan is slick as a eel and just using her. Savannah says that she’s leaving and when her mom says that things need to change to keep the family together, that they need to make a compromise. She can stay in Lansing and on the team, but she can’t date Dan. As Savannah is walking out the door, her mother says if she walks out the door, there is no coming back. Looks like Savannah’s made her choice as she leaves with Dan in tow. By the end of the evening it’s quite obvious that Savannah isn’t okay with the open relationship. Hopefully Dan realized that.

The next night, Dan’s out with another girl – only to ditch her and go hunting for Savannah. She leads him into her room and she starts rambling about things, finally coming clean about lying concerning being exclusive with him. Low and behold, finally they become a couple!

Alice snoops on the cheerleaders for Memphis Christian and videotapes their rehearsal, only to get caught by campus security and get her camcorder tape taken. Always playing the part, she puts on the role as a girl from another school that ‘admires’ the cheerleaders and just wants to show the tape of the boy she thinks is hot at her potluck. The line about her staying abstinent for him is laughable for a moment, as she gives the pouty lip to the security guard. And, of course, he gives in and tells her to get out of there. We then cut to the gym where the Hellcats team is watching the video and Savannah remarks about her sister, prompting Marti to remark ‘I guess her head’s feeling better’. Coach comes in and lays the smackdown on them all and they start practicing their asses off for their video to try and get a bid to Nationals.

Alice is caught with the pills she got last week by Lewis, who confronts her, and she lays it on him that she doesn’t trust Darwin and convinces him to help her fly – with the promise that she’ll flush the pills if he does. As they practice she, of course, makes a move on him. He tells her no fooling around, but when they’re knocked to the ground she tries again, kissing him. He tells her that he doesn’t want to get back with her because of all the drama, but she gets him to make out with her with the promise of no strings attached. There’s definitely more than cheering taking place on that mat. Poor Marti.

Marti accepts his offer and tells him of her trust issues and they agree to go to her mom’s open mike night. Later, Alice and Lewis get into a spat when he says that they’re over and he’s moving on. She throws the barbell at him when he walks away, after she admits that she was still taking the drugs. And here comes the coach to drag her into her office. The coach confronts her on the drugs and she tells her that she’s putting the team at risk. She’s told she can dance, but not fly, in the bid video, which doesn’t bode well with Alice. 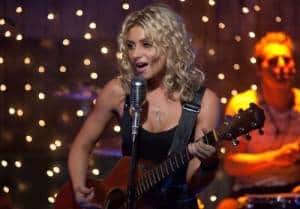 Does Marti really like Lewis or doesn’t she? He asks her to go to Jazz Fest and says he already has tickets. Seems Marti is worried about Alice and points out that he defended her last week in a fist fight. An excuse about school work and her law project makes things awkward as he heads out and she’s left feeling what appears to be stupid.

At brunch, Marti finds out that her mother could possibly get a promotion. Mama and her competitor are given a challenge for the promotion: this weekend, whoever raises the most money gets the gig. An event planner pulls in more money. Mama says that Marti should perform at a open mike night, which leads to a small argument followed by Marti, as usual, coming up with a solution. The good deed doesn’t go unpunished though, as Alice points out that she’s doing it so her mom has less time to bug her, which she admits is part of the reason.

When her mother confronts her on Lewis checking her out, she finally agrees to go out with him. Though the peace doesn’t last long as they get into yet another argument.

At open mike night, mother and daughter seem to be getting along great and Marti and her mother receive the news that she is now the manager! There’s a realization that they help each other and work well together. Lewis finally comes clean with Marti about Alice and says he can’t move on without getting past that. The show ends with Aly Michalka (Marti) doing what she does best, performing on stage to fellow Hellcats, her best friend and a slew of other people swaying to it on the dance floor.

I think the big question right now is what’s next for the Hellcats and will Dan be able to stay faithful to Savannah? What do you guys think? Yes or no?