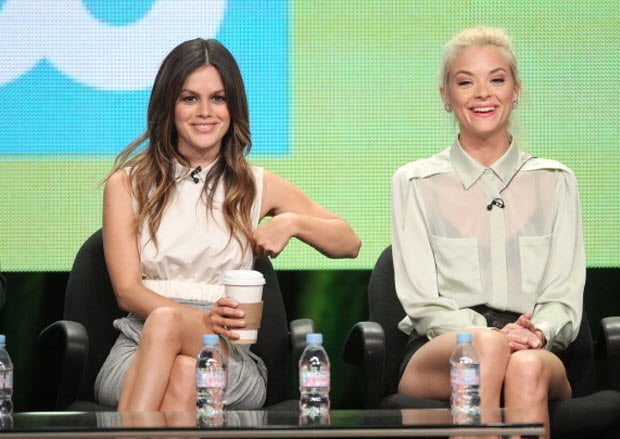 Only in a show like Hart of Dixie would a cabaret show actually stand a chance in successfully saving a small town from being merged into a rival neighboring town.  Overall it was a pretty funny episode with all the heart we’ve come to expect from these characters.

Sparked by a fight to prove that she is just as creative as her writer boyfriend, Zoe takes the reigns of Shelby’s cabaret show since her director quit at the last moment.  Zoe’s only qualification for the job is that she once wrote a cabaret in New York about cellular biology.  It’s not a surprise then to see the cell membrane costumes and hear her song about plant cells as the quirkiest town residents rehearse the show.  Joel got the hint that the reason Brick chose Zoe to direct Shelby’s play is so that her cabaret club fails and she would have to leave Bluebell.  Joel steps in to save the day for the cabaret, and in turn, hopefully the town.

Lynly was already suspicious that George and Tansy have been spending more time together as they fight the town merger, so I’m pretty excited that this is the beginning of the end of this relationship.  It was pretty funny when Tansy later warns George that Lynly has “crazy eyes”.  I actually felt bad for Lynly by the end of the episode when she heard George and Tansy talking after they thought Lynly had passed out.  Tansy apologized to George for judging Lynly too harshly before she got to know her, but she also admitted she wishes she never let him go.  I want them to get back together, but for George’s sake, he needs to end things with Lynly before she has the chance to dial up that crazy scale.

Tansy didn’t stop there with dispensing relationship advice around town.  Overhearing Wade’s plans to take Vivian out to another bar, Tansy saw Vivian hesitate before agreeing to go out.  Taking Tansy’s advice to treat Vivian better, he suggests they go to the cabaret that night.  She actually has to cancel the date because her “babysitter got sick.”  Wade’s pretty confused and shows up at her house to discover the truth.  Vivian still really likes Wade, but was embarrassed to admit that being out at 9pm is too late for her single-mom lifestyle.  This could be a tough situation down the road when Zoe admits her true feelings for Wade and he’s slowly but surely settling down with her cousin.

The writers had a smart idea to keep Lemon involved while she’s out of town taking care of her grandmother.  In a series of Skype calls that were probably all recorded pre-maternity leave, Lemon makes her presence known around town.  She dispensed advice to everyone including the Belles, her father, and even George.

The preview for next week looks like Wade will even be trying to get closer to Vivian’s son by watching his pet lizard.  It’s a little weird to see a domesticated Wade, but I think this is a good sign that he’s really changed his ways and matured since he cheated on Zoe last year.