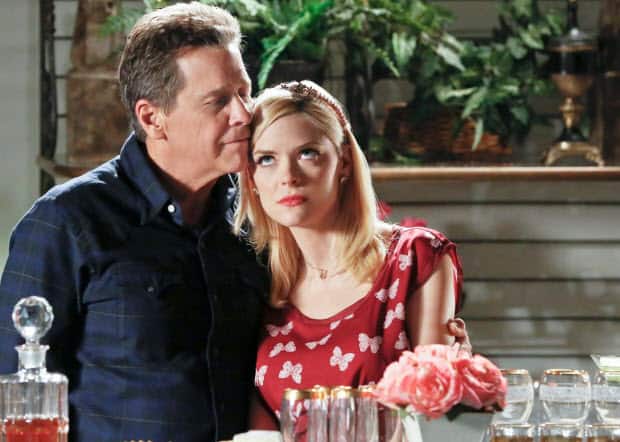 Given the fact that Hart of Dixie has lots in common with The OC (Josh Schwartz and Rachel Bilson, obviously), I was really expecting a Seth Cohen type of genius to dub this new holiday of Hanukkah and Thanksgiving a name similar to Chrismukkah.  Nonetheless, I still really enjoyed the mid-season finale.

As you could predict, family was a prevalent theme.  Joel’s grandmother Sylvie was in town for Hanukkah.  Zoe even treats her uncle Brando Wilkes (nicknamed for his Marlon Brando impressions) for a squirrel bite.  She invites him to lunch with Joel and his grandmother, where the widowed and widower hit it off.  Zoe’s cousin Vivian interrupts them before Brando and Sylvie were just about to go off on a Bingo date.  She blames Zoe for trying to mess with an old man’s heart, but luckily the connection between Brando and Sylvie was enough of a Hanukkah miracle to save the day.  Vivian’s overreaction to finding Brando had spent the night with Sylvie brought out a revelation about her own life.  Zoe learns that Vivian’s husband left her, and as Brando accused her, she doesn’t need to take her frustrations out on Zoe.  Finally seeing a softer side of her cousin, Zoe invites her to the Hanukkah dinner that Sylvie has been planning at Lavon’s house.

I’m so happy that Tansy is back to stay!  Her friendship with Wade is one of my favorites on the show.  She still knows him better than anyone, so she’s there to babysit him all day to make sure he goes to the dentist for a chipped tooth.  When he takes one too many anxiety pills, he’s loopy for the rest of the day.  He wanders off into a hay maze set up in town while Tansy has to do her new job as a process server.  Coincidentally, Zoe is walking through the maze at the same time and Wade walks right up, kisses her, and walks out.  He wakes up to Zoe standing over his bed the next morning, and they both agree to forget that anything happened since they both care for Joel.

In one of the most surprising scenes, Wade and Vivian run into each other at the Harvest Festival.  After Wade had just promised Tansy that he’ll start making smarter choices when it comes to women, he ran into Vivian as she was leaving the Harvest Festival.  It turns out they knew each other in high school and judging by Wade’s smile, there’s some new found attraction between the two.

Lynly and George are officially together.  She’s learning of his past relationships quite quickly since it seems he’s been involved in one way or another with almost every woman they encounter (“it’s a small town”), including Tansy of course.  Here’s to hoping Tansy is still there when George finally comes to his senses and realizes that Lynly is all wrong for him.

Lemon set out to find out the truth behind Shelby’s pregnancy.  She resorts to calling Brick’s mother, her grandmother Betty, back into town because she knows that she can talk some sense into Brick.  When Shelby tells Brick that she was artificially inseminated, Grandma Betty quite literally flips out. She was planning on keeping a closer eye on this new grandchild since Lemon and Magnolia have disappointed her, which only makes what happens more awkward.  Betty slipped and broke her hip, so Brick and Lemon literally flip a coin to decide which of them will go home with her to nurse her back to health.  Out of all the possibilities to explain Lemon’s absence during Jamie King’s maternity leave, I was not expecting this to be the reason she’ll be missing for a little while. Ever since she met Robert Buckley’s character, I was really hoping she’d end up leaving to reconnect with him.

In typical Bluebell fashion, almost everyone (except Lemon, Brick, and George) ends up at Lavon’s house for Sylvie’s Hanukkah dinner.  It seemed to have gone well, until the very end when Zoe saw Wade and Vivian leaving together.  Wade has been dropping hints to Zoe all season that he’s still in love with her, and he couldn’t have been more obvious than tonight when he kissed her in the hay maze, even if he was high on anxiety pills.  Maybe seeing Wade and Vivian dating will finally make Zoe question her true feelings towards Joel.  I think it’s pretty obvious to the viewers at least that Zoe and Joel are better off as friends, and probably eventually family, if his grandmother marries her uncle.

We’ll have to wait until January 6th to see what happens next!