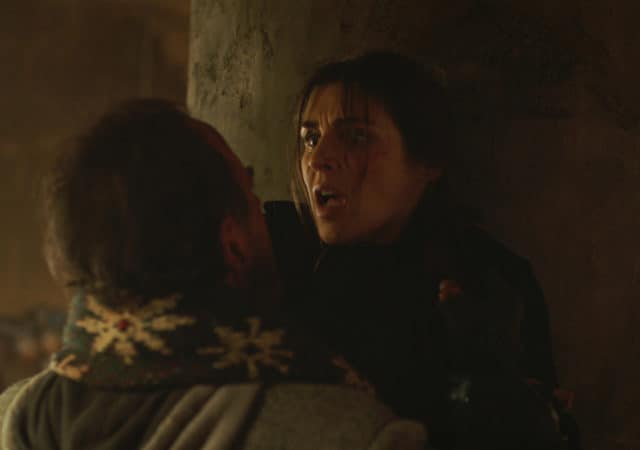 After a week off, SyFy’s Happy! is back with an episode that sets up some big things to come. There’s really no other way to describe this week’s episode, “White Sauce? Hot Sauce?”. It’s definitely a set up of something bigger coming in the next episode. This isn’t particularly a bad thing, and the episode has plenty of exciting moments, but the content acts more as a lead-in than anything. Again, these moments need to happen, and the episode does them incredibly well, but it’s also worth noting that not a lot actually happened in this episode.

We start where we left off, Nick and Merry are in the empty warehouse where the kidnapped kids had been only moments ago. Nick confronts Merry and the conversation ends with former knocking out the latter. Hearing Happy’s sobs from the Box that Hailey was in, Nick comforts the imaginary horse and offers his hand, saying they’re gonna find his daughter.

This was a particularly great moment between the characters, Nick seems to generally care for Happy in this moment, perhaps because he’s normally so upbeat (his name is Happy, after all) and seeing him so downtrodden is enough for Nick to drop his rough exterior, if only for a moment. I also have the feeling that Nick feels so close to Happy because he is a part of Hailey, the only way he can get close to the daughter he never knew he had.

There are some parts after this that aren’t really worth the episode’s time, one of the reasons it was the least-impressive episode so far. Mr. Blue is offered his own reality show and turns it down, quite violently, a scene which is basically pointless. Smoothie is cleaning up the warehouse and finds Merry, who he somehow missed after walking up and down the entire place with bleach.

I’m not even sure what he was doing or why he was the one called to do it, especially when he seems to be more of a torturer than a clean-up guy. Perhaps he was the one who found Merry to further the sort of rivalry that they have, but this relationship is, ironically, less tangible than that between a man and an imaginary friend.

But, I digress. After these two skipable scenes, we get to a rather interesting and creepy plot line. 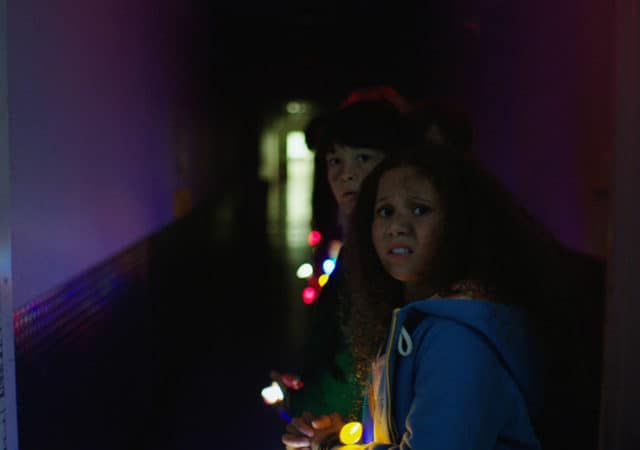 The van carrying the kidnapped children stops and they are taken out by the Very Bad Santa, who leads them like Santa’s reindeer. But before they are lead to their holding place, Very Bad Santa pulls Hailey aside from the others. He says that he can tell who’s naughty and nice, and that she’s too nice to go with the others. He offers for her to come with him somewhere, and I found this interesting.

It seems like the show might be setting up Very Bad Santa as a reluctant bad guy, a victim of his own twisted mind. Perhaps he knows what’s going to happen to these kids, and wants to spare one good soul from such a fate. But, these are just my predictions, the episode only sets things up for later, and before Hailey can say anything, she is pulled way with the others where they are pushed into a mysterious classroom.

Following this, we find Happy leading Nick to Hailey and Amanda’s home. But, he doesn’t enter quite yet, he’s scared, a fact that Happy is, well, happy to point out, which garners two “I hate you’s” from Nick before he finally gets the guts to ring the doorbell. Amanda answers and says nothing, she is not “happy to see Nick,” like Happy expected. Even though the long-awaited interaction between these exes doesn’t happen quite yet, the lead up is just as important. It both furthers Happy’s optimism that things will go great and it shows a stark difference between the paths that Amanda and Nick took following their split. 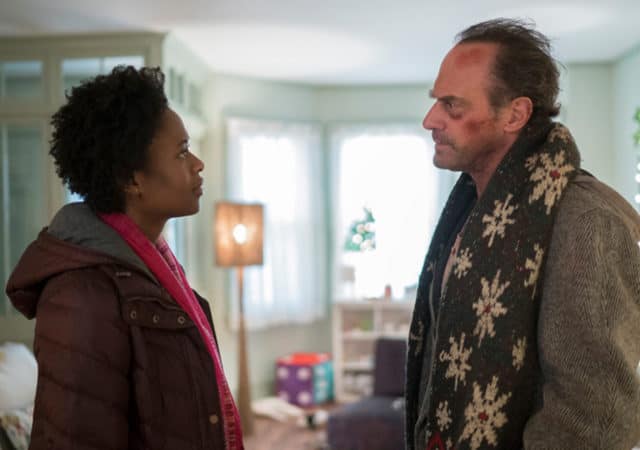 Before they talk, we go back to the classroom, which the children are more or less investigating. They find that all the books are empty, the puzzle and board game boxes have nothing in them, the phone isn’t functional, the view outside the window doesn’t reveal much. But, all their questions are quelled when the door opens and they instinctively sit down for the teacher, who is Smoothie.

Yet again, I questioned why he was the one to deal with this job, as well as why he was eating corn and playing a threatening recording of himself telling the children they are undisciplined. Of course, it adds to the bizarre nature of the show, but not really all that well, as I felt myself tilting my head instead of rolling with the strange punches that the show normally throws.

Cut back to Nick and Amanda and we get one of the best scenes in the series so far, the shining beacon of this episode. Nick starts out awkward and things turn heated very fast when the conversation turns to Hailey. As Nick and Amanda fight, Happy goes off to Hailey’s room. He is comforted by her belongings and hide under her pillows from the argument.

Things turn crazy very fast, but not because of the fight. Amanda says that everything Nick touches turns to violence, and when he claims this isn’t true, he is proven wrong in the worst way possible. Assassins crash into the house with axes in what might be the funniest and coolest action sequence thus far. Nick has his usual slapstick approach to nonchalantly taking out multiple enemies with little effort, but things become serious when Nick leads one of the thieves up to Hailey’s room.

This upsets Happy even further. Hailey’s room is her “special place” and Nick ruins it while trying to take out the last attacker, ending it by disemboweling the guy with one of Hailey’s first-place trophies. This brings up an important point. Not only was Amanda proven right, everything surrounding Nick turns to violence, but also this proven point shows why Nick is no good for Hailey. He might have the skills to save her, but his effect on the room represents the storm on Hailey’s life he would have been.

This entire scene is powerful, made more so when Amanda tells Nick to get out of her and Hailey’s house, and by extension, their lives and the investigation. 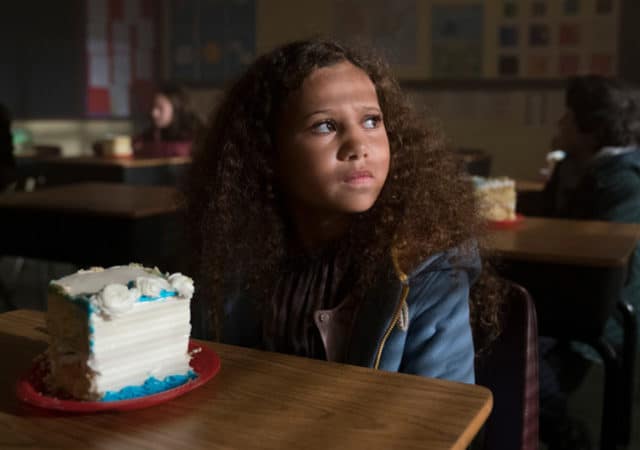 Back to Hailey in the classroom and the kids are being fed some a cake of some kind by Smoothie, a moment that continues the creepiness of the whole situation, especially since the term “fattening up” is used, but without context this scene still feels kind of random. But, perhaps I am judging too early, as there is surely more to come from this.

Before this scene, there was also a quick bit with Merry, who had been placed by Smoothie on top of her father’s grave with cat whiskers painted on, again, forcing the nonexistent rivalty. She is taken to internal affairs of the NYPD and told to stop following the kidnapped kids and get back to homicide, a threat sent down from Mr. Blue, one that is pushed harder using the “wall of heroes” behind Merry, on which is her father.

I really didn’t enjoy this scene, it worked to threaten Merry from continuing her investigation and set up the reveal at the end of the episode, but it was slow and uninteresting. The internal affairs women were funny, but that’s about it. The rest of the scene was boring and there was no need to use Merry’s father as a means of getting her to stay in line. We already have her mother and bringing her father in further takes away her own agenda as a character. 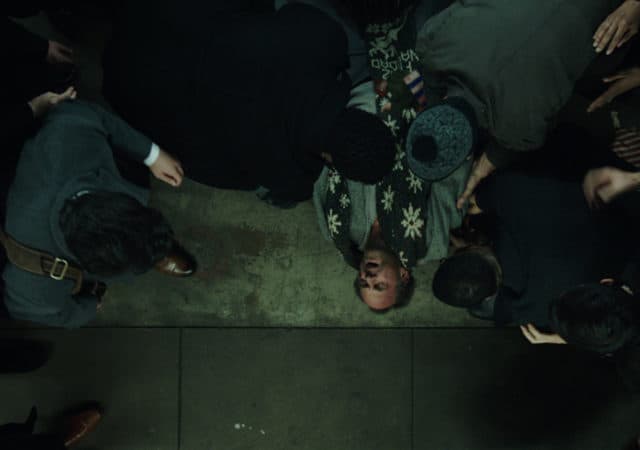 But, after these two less-than-stellar scene, we get a great moment between Happy and Nick. One of the recurring themes of the show seems to be Nick’s cynicism constantly be challenged by Happy’s optimism, and it continues in this episode. Happy want’s Nick to perk up with some Christmas spirit after they hit a wall with the investigation. Nick proceeds to prove that there is no Christmas spirit by laying down on the subway tracks, claiming that no one will save him before the train comes.

And it finally works. Nick’s attempt to show Happy that there’s no place for his childish happiness and optimism finally suceeds. Happy decides to just “poof” away, out of Nick’s life forever. It’s a tragic moment, not just because Happy is gone, but also because Happy was sort of a representation Nick’s own optimism. The last little spark of looking on the bright side that was chipping away at Nick’s cynicism is gone, possibly forever for all we know. Even worse, turns out people would save Nick before the train came, once again proving Nick’s cynicism wrong. It’s a Christmas miracle.

If that wasn’t bad enough, Nick finally has a lead in the investigation. After hearing someone sing “Blue Christmas,” Nick has a flashback. Turns out he met the Very Bad Santa before, and he remembers he works for Mr. Blue, a realization that comes too late, as Nick’s “partner” is gone. 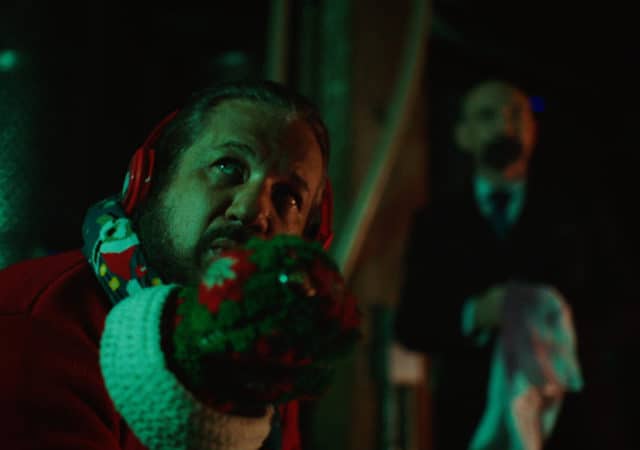 There was a lot of up and down in this episode. Some scenes dragged on and/or felt completely pointless. However, some of the show’s best moments came from this episode. I guess the best way to put it is that there were more low points than high points, but the good outweighed the bad. Furthermore, this episode served as a great setup for things to come, and a bit of a low point in the series means that things can only ramp up from there.

“White Sauce? Hot Sauce?” was the first episode of Happy! that I felt like made a few choices for the sake of stretching things out. Most of the series expanded the world of the comic, while this episode felt a bit padded out. Not the worst thing in the world, but I hope it’s the last I see of this in the series.

Overall, this episode has a lot of strong moments, enough to push through some of the sluggish and boring scenes, but because of those scene, I felt it was the weakest episode so far. However, I have a feeling next week’s episode will be a lot more exciting.

Until then, thanks for reading, and stay tuned for next week’s review!

Nick and Happy reach their last resorts as their quest takes a bleak turn on this week’s Happy!