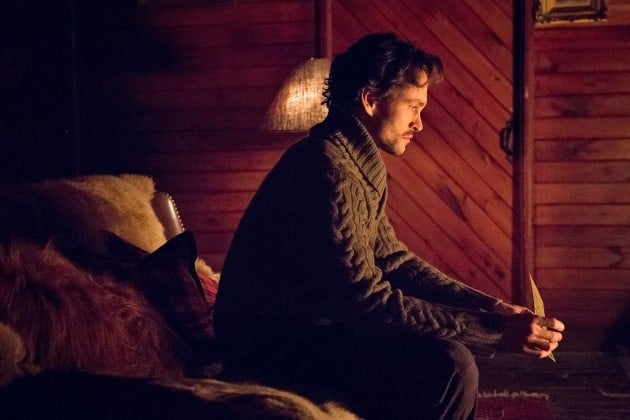 Something that has separated Bryan Fuller’s Hannibal, since its first episode, from other series involving serial killers is its handling of violence. The ways that the show observes and interprets acts of violence are carefully considered, as opposed to rushed jobs for the sake of moving a plot along. It’s easier to murder a bunch of people on-screen in a shocking way and shift to the next key moment of a narrative than it is to linger on those killings and let them steep into the viewer’s psyche. While aiming for slightly different aesthetic goals in the first seven episodes of this season (which had many viewers questioning the direction of the series), Hannibal returns to this key distinction regarding violence in “The Great Red Dragon” in full force. In fact, I would go so far as to say that this is the most disturbing episode of the series thus far because of its in-depth look into the mind of Francis Dolarhyde (aka The Tooth Fairy) via Will Graham. Many times, shows ask us to look at and get to know terrible people–murderers, rapists, abusers of other sorts. Rarely are we meant to sympathize with any of them and even rarer is the case when we do sympathize with one who is being developed to elicit sympathy (Hannibal from this series is, in my opinion, one of those few examples, and only occasionally at that). “The Great Red Dragon” makes no attempts on this level. This is, to be sure, a look into the mind of madness. “It’s dark on the other side,” Hannibal warns Will about going through the door that Jack has opened. “And madness is waiting.” There’s a menace and pure evil pervading this episode that Hannibal has yet to show us; even Dr. Lecter appears secondary by comparison. So, while “The Great Red Dragon” is a triumphant return to form for a series that took the procedural structure to new and interesting places (yet, ironically, being based on a popular property), the episode also warns us about what we’re getting into with this final arc. There’s the stray bit of comedy here and there, but this is Hannibal‘s descent into a new kind of darkness, and it’s a much more troubling and dangerous for our hero than anything he’s had to face before.

For the viewers’ benefit, it’s hard to experience that darkness as fully as we probably should simply by virtue of all the satisfying moments in the episode. For instance, when Will sees the display in Mr. and Mrs. Leeds’ bedroom, his quick and ineffective attempt to flee into the case notes is getting us ready for that pendulum to swing–Will’s muscle memory pushes him back into his old self. And when we hear him say those words–“This is my design”–it feels like home. This is the Will we love and care for. But that nervous twitching and the anticipation it instills in us belies how terrifying Will’s relapse must be for him. Will has spent three years trying to get away from this, and even though he knows he has to do the right thing by helping catch The Tooth Fairy, nothing can prepare him for the rush of emotions that come in that moment. It’s not just the first step in getting back into that mindset; all the horror of the Hannibal Lecter years comes with it. The last time Will Graham was a profiler was when he was baiting himself, trying to earn Hannibal’s trust by becoming the cannibal himself. We don’t see flashbacks to any of that in the Leeds home, but just as violently as Will’s body sends him down that path, the open door lets in the violent wave of those memories.

Worst of all, this is the most horrific profiling job Will will have done thus far. The artistry in the early episodes of Hannibal meant that killers had discernable motivations or strange philosophies that dictated their actions. Even Molly Shannon’s mother of child murderers, who was probably the series’ reigning champion of disturbing people until this episode, was attempting to re-create the concept of family because of her disgust with traditional notions of the unit. Dolarhyde, though, has not been given any voice yet, so what we see is what we get. Previous written and adapted material aside (more on that in “Bite-Sized Thoughts”), “The Great Red Dragon” gives us images–not words–of Dolarhyde, and nearly all of them are intensely uncomfortable. From the cracking of fingers to the slow and arched crawling, the man seems unhuman at times. At other times, he is tormented and haunted by images of William Blake’s many-faced beast. And the most grotesque version of the character has to be filtered to us through our protagonist, which hardly makes any of the details more palatable. It’s not just that we see Will killing the Leeds family–it’s how he does it (and, by extension, how Dolarhyde did it). The detached brutality of it is the stuff of nightmares, Dolarhyde-Will watching a dying Mr. Leeds bleed out until he realizes that he’s trying to reach his children, and then the killer taking care of that with a coldness I haven’t seen since David Fincher’s Zodiac. Other series paint disturbing portraits of people (The Fall is a little bit more successful than some other stuff you’ll see on network TV), but none of it is on this level, and the ultimate success of “The Great Red Dragon,” which would run the risk of being too difficult to watch otherwise, is that it lays the foundation of Dolarhyde at the same time that we’re being asked to acclimate ourselves to the new status quo of Hannibal. This might sound like hyperbole–that what we see in this episode isn’t all that disturbing compared to so and so or such and such–but I would encourage a more thoughtful consideration of what these events really mean. If you remove all scenes that don’t involve Will or Dolarhyde, this is a masterclass in psychological horror that does absolute justice to Thomas Harris’ work and to a genre that is polluted by reveling in the distasteful. It is the realization that, after somehow surviving Hannibal Lecter and building the best kind of life he could for himself, Will is staring down yet another devil. And if we didn’t know any better from the source material, it would be hard to believe that he could make it out of this intact, either physically or mentally, now that he’s let the darkness back in. Will and viewers alike: proceed with caution.

– Okay. This is a bit of touchy subject for me, because I feel strongly about it. Regarding adaptations of existing material, I find it an almost pointless (and, really, detrimental) exercise to waste time making comparisons. I’m an avid reader. I did all of my higher education in English literature and Creative Writing. But I also love film and television, and it’s important to me to respect the differences between those mediums. Thomas Harris’ novel and Bryan Fuller’s series are two different entities, and they must be considered as such. It genuinely appalls me when I hear criticism of adaptations not being true to the source material, because–in no circumstance ever in the history of my life–have I wanted to see and experience an exact copy of something I’ve already seen and experienced. Now that we’re finally into the proper events of the source material, countless comparisons are going to be made between Red Dragon, its two film adaptations and this television series. And guess what: all of it is totally useless to your enjoyment of Hannibal. Totally and utterly useless. Bryan Fuller has a vastly different vision as an artist than did Thomas Harris when writing the novel. And while he happily uses it as an influence, often bringing in word-for-word quotes, it is on him to interpret the novel, not re-create it. He has done a fantastic job with this series thus far, and I suspect that will continue to the finish line. But for all these reasons, I am not going to writing anything qualitative about how these six episodes are going to exist alongside the other versions of Red Dragon we’ve seen. I have no interest in it. My interest is in seeing Fuller do his thing, and the less he uses Harris’ work as a crutch, the better.

– With that out of the way, this is the first perfect 10 I’ve given to an episode of Hannibal this season. Ratings and grades can be strange things, and I don’t necessarily think this is a perfect episode of television in every conceivable way, but it is the one that has affected me the most and which successfully does so many things at once. This could easily have been the pilot for this series (with a couple tweaks) if Fuller had wanted to jump right in at Red Dragon, and it would have been one of the best pilots of the last decade. Very, very happy to be beginning this new story and to have Will Graham back.

– OH MY GOD, WELCOME BACK SCOTT THOMPSON AND AARON ABRAMS. Seriously, the presence of Jimmy and Brian has been sorely lacking and missed. That’s Special Agent Price, by the way.

– Speaking of that Molly Shannon episode, the boy vocalizing for Hannibal in his mind palace brings back memories of that episode, since it was one of the only instances of vocalization in the soundtrack of that first season, and it also focused on children.

– So, all those close-ups of drinks being poured? Yeah, apparently those weren’t just for the aesthetics of the movement of liquid. Hannibal was actually putting people into drinks, not just food.

– “A promise in waiting.” We’re supposed to be worried about Alana being on the chopping block. Not only is there a reference to how Hannibal promised to kill her, but immediately following it is a transition shot of glass shattering on Alana’s face that winds up being Dolarhyde’s mirror. We’ve seen Will use a proxy murderer to get to Hannibal in the past, so it’s not beyond Hannibal to keep his promise by somehow convincing Dolarhyde to kill Alana. Either that or it’s blatant misdirection.

– Chilton on The Tooth Fairy: “…[he] has a much wider demographic than you do. You, with your fancy allusions, your fussy aesthetics. You will always have niche appeal, but this fellow…there is something so universal about what he does.” So, do you think Fuller suspected the series might be cancelled and threw these lines in there for some capital-T Truth?

– Alana is now in charge of the Hospital for the Criminally Insane! Get out of her chair, Frederick!

– There is both a mole and a deer (with antlers) in Alana’s office.

– Winston (and many of the other dogs) appear to be alive and well. Panic over. At least, one of them looked like Winston. In any case, Will still seems concerned about the canines in any given situation. “Please don’t worry about the dog.”

– Welcome Molly Graham, who manages to get legitimately great characterization out of two words. Will says “If I go, I’ll be different when I get back.” Molly’s reply? “I won’t.” Boom! ‘Nuff said.

Hannibal by the Numbers