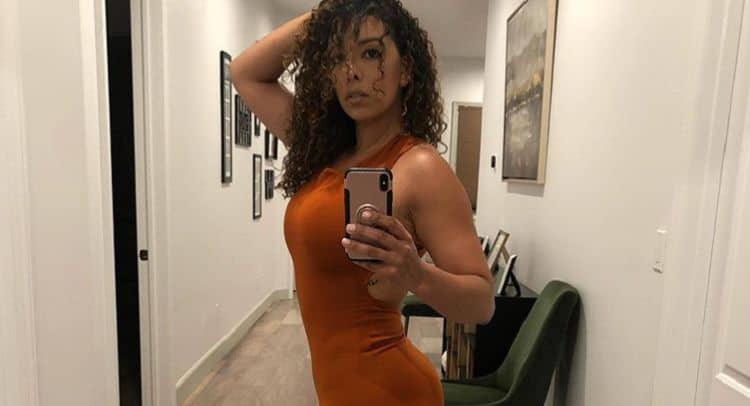 The stories of athletes and the women they date more often than not ends up making the entertainment and sports headlines. Unfortunately, some of the more recent stories are about domestic violence and abuse than happy endings. The good news for this article is that Gloria Govan is a success story in her own right. They say opportunity only knocks once, and while that may not be true, it is true that we have to take advantage of the opportunities that walk into our lives. Gloria has done that, so to give credit where credit is due, here are 10 Things You Didn’t Know about Gloria Govan.

1. She had a cookbook published called A Mixed Girl’s Favorite Recipes.

It’s on sale at Amazon, and is a natural extension of a glam girl’s public persona. What better way to prove that the way to a man’s heart is through his stomach? But this is not just something Gloria threw together. The photography is excellent and the range of recipes covers most people’s cuisine preferences.

2. She has acting credits in films such as Chocolate City and More Family

Though not blockbuster movies, Gloria has proven she does have some acting talent. Though Chocolate City was hardly noticeable in movieland, Gloria did choose to be in a film with star Vivica Fox which shows that she has supreme confidence. More Family on the other hand didn’t even show up on the radar.

We know these figures are often under or over estimated, but given her track record it is safe to say she surpassed the $1 million mark. The important thing to know is that it is money earned through her own hard and promoting her brand.

4. She has close connections to the NBA

As the ex-wife of NBA player Matt Barnes and the current relationship with Derek Fischer, her NBA connections have been the springboard for her success. After her marriage to Barnes, she found her way onto the reality show “Basketball Wives.” That was followed by “Basketball Wives: LA.” After her divorce from Barnes, Derek Fischer would appear on the scene to maintain her NBA connection.

5. She first met Matt Barnes in the eighth grade where they were classmates

This is not a high school romance to marriage situation, but the fact is they did know each other before either of them completed their physical development. Whether Gloria knew Barnes would end up an NBA player or Barnes knew Gloria would have such potential is unknown, but we can say that it pays to stay in touch with your former classmates. You never know.

About those NBA connections, it seems that it runs in the family. Though Laura has not achieved the glam status of her sister, she did take advantage of the opportunity to romantically connect with at least one of her sister’s friends and has 4 children by him over a 16 year relationship.

What do you get an amazing dad that has it all? His favorite sports gear, of course. I can always count on @JCPenney to meet my sports fan Father’s Day gift needs. Check out the Sports Fan Shop online to find the perfect gift! #AllAtJCP #ad

7. She was rumored to be involved with Colin Kaepernick

Though she had denied the rumors, her ex claims that Kaepernick was just one of several other professional athletes that gave her a workout. Whether this is to be believed or not is something to decide after getting to #10 on this list.

8. She was the broker between UFC and Fox television

Govan partnered with UFC to promote the association with Fox television that resulted in the UFC being on one of television’s most watched sports networks. Not many glam gals can pull this off, showing that she also has a good business acumen that has helped her achieve success.

9. Gloria and Matt had twins – Carter and Isaiah

The twins, who will be celebrating their 10th birthdays this year, were born while Barnes and Govan were still dating. Of course, this often proves to be a disaster, especially when considering the two got married later. But the marriage didn’t last 4 years before they split permanently. But once again, Govan keeps the NBA connection going, so who knows what kind of talent the twins will showcase down the road?

Govan and Fischer have made some of their own entertainment headlines, starting in 2015. If the math seems suspicious, the two started dating while she was still married to Barnes. Apparently Barnes is over it, and Fischer just dropped the question to Govan with a ring that is worth an estimated $1 million.