Home
Movies
Funko Releases Their Pop! Short for Upcoming The Rise of Skywalker 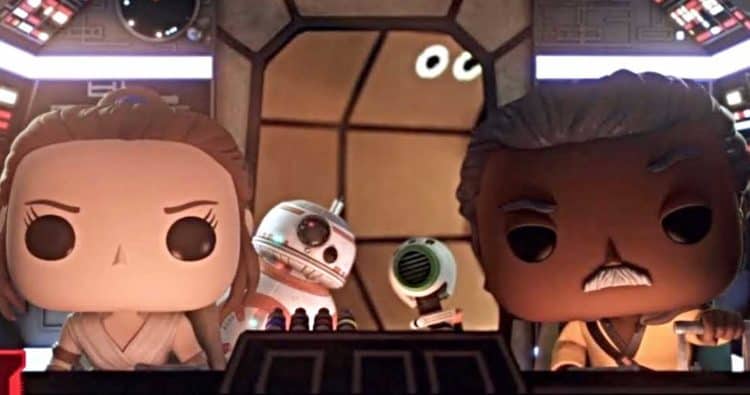 The world of Funko Pop is definitely getting bigger now that it’s been noticed as an emerging favorite of so many people. Having many Funko’s on my desk I can at least say that it is something of pleasing idea that has managed to gain a lot of traction, but seeing it appear much as Lego has been doing in the recent past is kind of surprising. As a part of the Star Wars franchise though it’s not too surprising since there are a great many characters that can be used and as a result there was a good chance that it would inspire a Rise of Skywalker short that would involve someone from the movie. Ethan Anderton of SlashFilm might agree with this but he also has more input on the upcoming movie. But putting Lando Calrissian in there is something of a throwback that hopefully many fans enjoy since the aging gambler is someone that a lot of people are no doubt looking to enjoy seeing on the big screen again. Whether people are really looking forward to the movie is hard to say since The Last Jedi is still leaving a bad taste in a lot of peoples’ mouths considering how it turned out. It’d be nice to see the old crew, Han, Lando, Chewie, Luke, and Leia get together and take on the First Order like back in the old days, but of course that’s not possible now since all but Lando and Chewie are gone, Leia because Carrie Fisher passed away and Han and Luke because, well….Disney.

That sounds a little petulant but there’s a good reason for it and it’s because Disney saw the need to do things their own way, which is easy to understand, but forgot to realize that Star Wars has had a huge, dedicated fan base that was hoping for lightning in a bottle once again and instead got a sparkler in a plastic sleeve by comparison. That’s a weird analogy but it made better sense in my head. Anyway, using Funko Pop as another way to drum up interest in the movie was likely a smart move since a lot of people are into these bobblehead toys and tend to have a lot of them stashed away in their home somewhere if such is the case. Mine tend to rest on my desk and shelves, outside of the box as not being a collector but more of a person that enjoys having them around I can’t see the joy in keeping them in the box. One day they might all be collector’s items, in fact some of them already are, but it still feels wrong to leave something boxed that should be taken out and allowed to grace the space they’re in with their bobbling presence.

This short does bring up a funny and very telling subject though when it comes to the Millennium Falcon since if anyone that’s watched the original trilogy and the movies since that knows, the Falcon has always been a somewhat temperamental ship that seems to break down in one way or another and require repairs more often than any other vessel in the franchise. The great part of that has always been that Han and Chewie were technically able to repair just about anything since as long as they had the parts and the tools they could keep the old bird flying until they found enough credits to upgrade or replace whatever needed replacing. But there was always something being said about the Falcon anyway since she looked pretty rough and wasn’t always the most reliable transport. Even with Lando being the first owner there was plenty about the ship that didn’t really pass muster since it started its life as a cargo hauler and was never really meant to be anything other than this. Once Lando got a hold of it however the Falcon’s adventures started to multiply as she became not only a potential cargo hauler, but also a smuggling ship that could hold a great deal of contraband and passengers, or both, and be used in a number of illicit activities.

There was actually a book that was written specifically about the Falcon and showed how many owners it had gone through since being assembled on the line. It if even stated in the book that the Falcon almost seemed eager to get up and running as a series of malfunctions on the line made it clear that this ship was not like the others that came from the same line. If you can believe it, Lando wasn’t the first owner of the ship any more than Han was, but it’d be a miracle it seems if that book was allowed into the current canon by Disney since they’ve scrapped just about everything else and made it clear that they’re doing things their own way. Some days it seems that Lucas should have kept a tight hold on his creation.