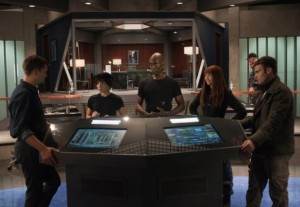 Last night’s Fringe launches us into a new chapter of season 4. We finally see the two universes really, truly working together to achieve a common goal — and it was fascinating. One of my favourite scenes of the episode (although I did have several) was when the members of both Fringe Divisions were all sitting around the same table, trying to figure out their action plan for combating David Robert Jones. I’m beyond curious to see where this takes the characters in the coming weeks: we’ll have an uninterrupted string of new episodes now until the end of February, which is something of a relief after the numerous hiatuses so far this season.

One thing I’ve found simultaneously intriguing and frustrating about this new timeline is trying to figure out where and how things would have changed without Peter’s influence. Fascinating because who doesn’t love a good thought-experiment; frustrating because sometimes I just can’t see how certain things would come about without Peter. That being said, the fact that David Robert Jones — a bad guy Fringe Division killed at the end of season 1 in the original timeline — is still alive makes more than a little sense. One question I’d had about Jones was how he’d never crossed paths with Olivia: surely he would have still been fixated on the Cortexiphan kids, and it was through his actions that Olivia found out about her involvement in the trials in the first place. Although in the original timeline, Olivia didn’t remember the trials at all, whereas she certainly does in this new one. 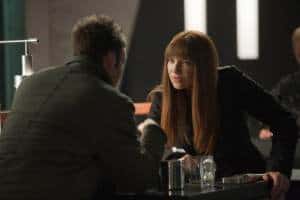 I should have known that this question would be answered, and it becomes obvious at the end of the episode that Jones most assuredly knows who Olivia Dunham is, which now makes me wonder if we can expect the return of some of the other Cortexiphan kids. I have to admit, even though I was half-expecting Nina to be working with Jones, I was still rather shocked. I don’t understand how she could betray Olivia after raising her. But nothing is ever simple and clear-cut in Fringe: I wonder if, in some twisted way, Nina thinks that she’s helping Olivia, somehow. It also brings me to the question of Alt-Broyles’alliance with Jones — somehow the explanation that he himself is a shapeshifter is almost too simple, but I suppose we’ll find out soon.

Ever since the season 2 episode ‘Peter’, where we saw exactly what happened the night Walter crossed over to take Peter, I’ve hoped to see a reunion between Alt-Elizabeth and our Walter. We finally got to see that reunion in ‘Enemy Of My Enemy’, and it was well worth the wait. The search for absolution has been a recurring theme with Walter: in our original timeline, he has managed to make some sort of peace with it. Helped, I think, by the fact that he has living, breathing proof in Peter that his actions were in some way worth the consequences. The Walter in this new timeline had no such tangible evidence, and has lived the last 25 years believing that he deserved every punishment. Orla Brady and John Noble have been great together in every single scene, but in last night’s Fringe they were phenomenal. Elizabeth is probably the only person who could give Walter absolution, and I love how much it says about her character that she has forgiven him, even knowing that her Peter didn’t survive. 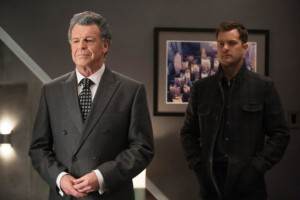 The other scene I’d be remiss if I didn’t mention was the one between Walter and Peter: I mentioned in last week’s review that the scene between Walternate and Peter assuaged some of my longing for the relationship between the Bishops that we’ve come to love these last 4 seasons. But last night’s Fringe finally, finally returned to some of the dynamic we’ve come to expect between the father and son. Nothing says it better than Peter’s statement to Walter that he’s not at all surprised to find out that Walter is exactly who he thought he was. I can’t wait to see what happens next, now that Walter is committed to trying to help return Peter to his own timeline.

I can’t help but wonder, though, if it’s even possible for Peter to return ‘home’. I have yet to make up my mind as to whether this universe is ‘our’universe rewritten, in which case these are all the people Peter loves, but different, or whether it’s another universe entirely. That being said, I saw them filming a bit of Fringe this week, and something I saw makes me think that we’ll get a definitive answer on that question sometime soon. (No, I won’t give any details.)

The only thing that disappointed me a little was that Michelle Krusiec’s shapeshifter ‘Nadine’was killed: I found her character intriguing, but I also got a kick out of hearing my own name on the show. Although as we’ve seen with Jones, no one ever really dies in Fringe! From the promo trailer for next week’s episode, we’ll get to delve into September’s ominous statement from last week’s episode that Olivia has to die. And speaking of Observers, I’m intensely curious as to whether Astrid will find anything in September’s blood sample that Olivia asked her to test. The writers and producers have said several times that we’ll learn more about the bald-headed enigmas this season, so I can’t help but hope that some answers will be forthcoming.

All by way of saying that I thoroughly enjoyed this episode of Fringe, and I can’t wait to see what happens next. Things certainly seem to be picking up speed: all we can do is hang on for the ride. A