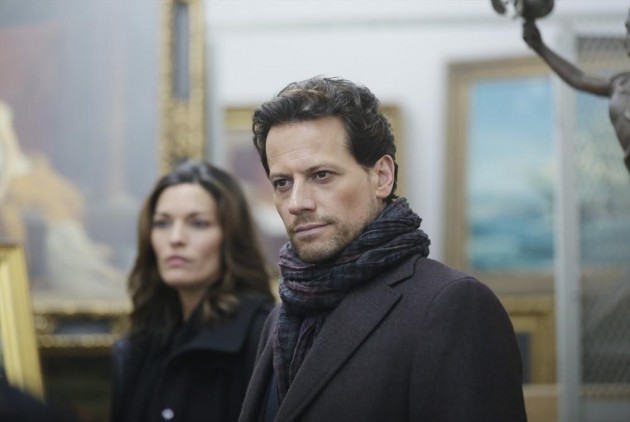 Nazis, intrigue, and returning antagonists. What more could you ask for from an episode of Forever? It’s back from what will (probably) be its final hiatus of the year, so now is the time for things to get interesting.

This week on Forever, as we learn more about Henry and Abe’s pasts, we discover that Henry’s father was a reluctant slave trader, while Abraham gets a break in the search for the names of his parents. Henry and Jo solve a case about someone who is murdered while trying to right the wrongs of his Nazi ancestry. Meanwhile, Adam resurfaces and proves that there is more to him than meets the eye.

Forever put forth a really strong story tonight. The Nazi mystery worked well, both with the pasts of Henry and Abe, but also as way to learn more about Adam, the mysterious antagonist. Guest star Burn Gorman (Turn) returned to play the mysterious character, and his nuanced and layered performance was just as strong as it was in his previous episode. I think Adam is by far the most fascinating character on the show.

The past for Henry was more interesting than normal, but I really think the strength of back story belongs to Abe in this case. We learned in this episode that Abe was in Auschwitz concentration camp when he was a child, and that he never even knew the names of his parents. Ironically, it was Adam who helped him discover his parents’ names, and he was able to locate a picture of them to learn more about his past. World War II stories can always hook me, and even though this was loosely rooted in WWII, it wasn’t heavy handed and it stayed true to its own story.

I thought they may have tried to do too much in this episode. I mean, Forever is no stranger to under-utilizing its characters, which I’ve certainly mentioned previously, but this time there were several that went unused. Lucas is always under valued by the show. He’s excellent at comic relief, but I’m certain that he could add more value to the show. I’ll take some pop culture references, but Joel David Moore is great and should be used better. In this particular episode, Alanna De La Garza was under utilized as well. She’s a wonderful leading lady, but was only present in this episode to advance the plot. Honestly, they probably could’ve done without the police scenes altogether in this episode. It all felt a little rushed and uneven.

By and large, Forever is a good show. It has a serialized mystery plot, disguised by a procedural format. I think, sometimes, it tries to be Castle, and on some level why wouldn’t it? Castle is a very successful show for ABC. But on the other hand, Forever needs to find its own voice. The immortality and over-arching story are what make it special, so why not capitalize on that? They started that here, but they still felt the pressure to put it into their procedural format. Perhaps this will grow on me, but the more likely scenario is that I will continue to be frustrated with how the plot divides. This episode was almost there, but the procedural element is the weakest element of the show, and I would much prefer to see Henry, Adam, and Abe work through all of this history together.

I was on the fence about this episode, but a lot of good things are happening.

What did you think? Did you enjoy this episode? Or are you on the fence like me? Let us know!!