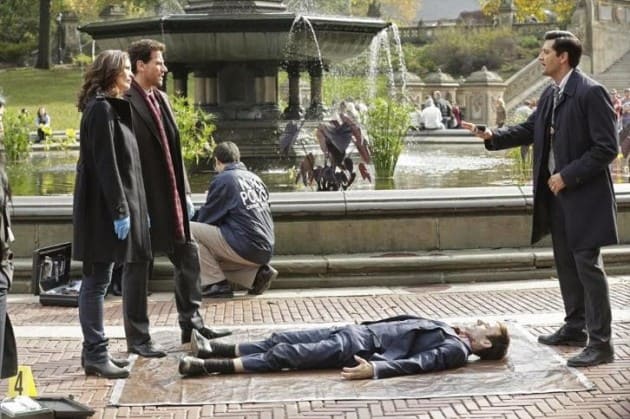 Forever gave a “noble” effort in it’s tenth installment. If you watched the episode, you’ll get that joke. This week, they encountered a victim who impersonated a British nobleman. See. Now you get it?

This week, they had all kinds of extra mysteries to uncover in addition to the murder. Like who was this guy really? Why was he impersonating a nobleman? What possessed him to get married as his alter-ego? Was it money? This episode did a great job about posing more questions than “who killed that guy?”

I really enjoyed this week’s episode, and it’s not just because of the 20 questions. They’re finally asking another question that plays  into the show in a bigger way. What happens when Henry runs into people he knows? You know, from when he was younger? I’ve been wondering that since the first episode. Would those people recognize him? What would they think? Obviously, this episode inspired a lot of questions.

It became apparent through the course of the episode that this man could not have become a believable British nobleman on his own. So it was assumed and then confirmed that he must have had a “Henry Higgins”. His, it turns out, was his girlfriend and con-artist partner, Patricia (Breaking Bad‘s Laura Fraser). How could Lydia NOT be the bad guy? I mean she wasn’t, but I would’ve accepted that. She could’ve been working with creepy Todd!!

Forever really is starting to find its groove as a series. As much as the “genius lead who solves mysteries” mantra is tired, Forever successfully breathes new life into the genre. Henry is much more likable than a Sherlock or House, and the supporting cast separates the show from the rest. I love Judd Hirsch’s Abe more and more each week. He gets more to do, his comic delivery is on point, and he plays an integral part in the larger story. And you must get tired of me raving about Joel David Moore’s comedic chops. Everything he does makes me laugh, and I only wish that Lucas would get his own show.

I tend to neglect Alana De La Garza as a main player, but I shouldn’t. She’s strong in every single episode. It’s hard for actors on a new show to put forth a performance that’s consistent, especially when you’re constantly overlooked compared to Ioan Gruffudd. De La Garza has put forth a really nuanced, strong performance thus far, and she very much holds her own in the excellent cast. I love how she plays off Henry, but I’d like to see more of her individual story.

Ultimately, I still want to know more about Henry. His past could have more to do with the main part of the show, but they use it better each week. His past is starting to catch up with him, and that’s when the show is at its most interesting. I’m starting to get pretty excited about where the show is going, though, and they’re starting to learn what makes the show good.

What do you guys think of Forever? Are you still watching? Where do you think it’s going from here? Let us know!