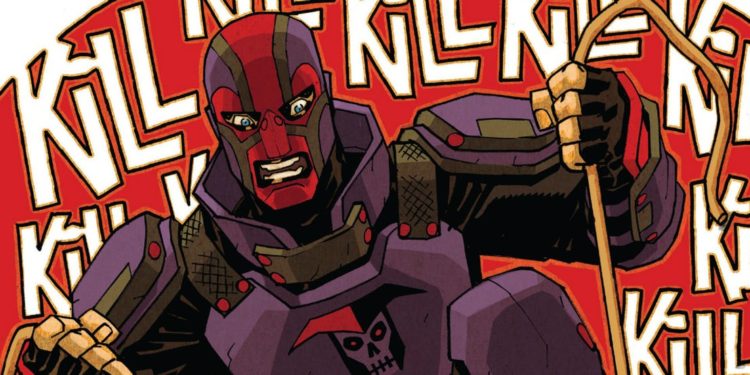 There are a lot of psychopaths in the Marvel Universe, but Foolkiller seems to be one of them that you can’t help but think helps to raise the bar a little more since his idea of killing off anyone that doesn’t seem to live up to his expectations is kind of nuts. He’s a very intelligent character and has taken on a few different superheroes, but he’s also kind of a gag character that is fun to laugh at and ridicule since without his gadgets and costume he’s not even a bargain basement Tony Stark. He’s fairly skilled in combat and again he is intelligent, his ideals of what people should be like and how they should act tend to hold him back more than anything. In a lot of ways he’s that lone nutcase that thinks he has a well-defined purpose and has the means to go about achieving it, but at the same time once his values and ways are questioned there’s a good chance that he’ll stop or perhaps try to kill himself since he’s crossed the same line that he’s ready to punish others for crossing. Either way he’s kind of hypocritical character.

Here are a few things you might not have known about the Foolkiller.

There was another Foolkiller that came before this current iteration and he dressed almost like Zorro but had the same weapon and kind of the same goal in life, to kill those that didn’t ascribe to what he believed was normal or acceptable.

9. The character has multiple doctorates.

It’s a bit difficult to think that a character who is this intelligent might be able to come up with a persona that is this insipid in a way. But in Jessica Jones he’s definitely being made into a much meaner and more sadistic version of the Marvel character.

8. His ‘purification’ gun is his main weapon.

The gun is quite literally a disintegration ray that can reduce a person to dust with one shot or destroy a great amount of material with each blast. He almost used it on himself once but was stopped from doing so.

7. He’s joined up with Deadpool in the past.

It kind of begs the question as to why he never went after Deadpool as ferociously as he went after others since Deadpool is one of the biggest fools in the entire Marvel universe, but at the same time he’s also one of the deadliest.

6. He tried to commit suicide after fighting Spider-Man.

The irony of this character is just kind of funny since he did take on Spider-Man when he figured that the wallcrawler was kind of a buffoon, but when he was convinced that anyone who bothered to fight Spider-Man was indeed foolish he then tried to kill himself, but Spidey stopped him.

5. In the comics he was more of a comedic figure.

It’s hard to see how he could be anything else since quite honestly he doesn’t have any powers but he is intelligent and yet for all that he is still a character that dresses up and kills people for being, essentially, stupid.

4. He tends to kill those that ‘don’t have poetry in their heart’.

In other words he kills those that he perceives to be fools since they live in a very foolish manner, according to HIM. What makes this kind of character dangerous is that he’s as likely to kill someone that’s not really guilty of anything as he is a person that might have done something worth his ire.

3. His headquarters is an armored truck.

There have been a few individuals throughout the comics that have utilized this same kind of thing for their headquarters or at least for other purposes they’ve needed since it does offer a decent sense of privacy considering that it can be moved around.

2. He took on the Defenders in the past.

It sounds like he even decimated their headquarters which doesn’t seem like it would be an easy thing to do since while the Defenders haven’t been as powerful as the Avengers or many other groups they’ve still counted a few very powerful figures in their ranks.

1. It would seem his presence in Jessica Jones is going to be somewhat different.

Thomas Bacon ScreenRant has made it known that this character is going to be much deadlier in this version and won’t be someone that can just be laughed off or so easily defeated. The great part of this is that he’ll be able to take on a bit of realism that might make his character a little more impressive.

This is one of those characters that you don’t recognize easily since he’s not around all the time, for a good reason. He might be an interesting character but that only carries him so far.