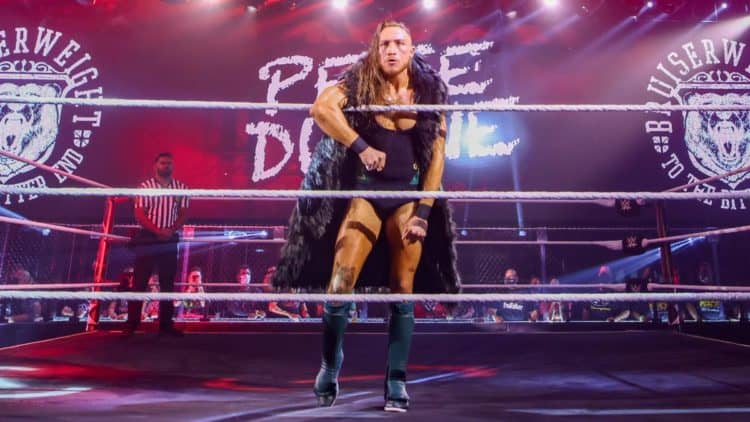 The second-generation star shocked the world earlier this year by beating former NXT Champion Tommaso Ciampa to win the prestigious belt for the first time ever. Now, there’s no telling on how long Breakker will be champion. In fact, the NXT star could easily lose the belt to Santos Escobar at NXT Vengeance Day. However, the likelihood is slim since it’s his first title defense and the company has surprisingly brought back Dolph Ziggler to the brand. Still, here are the five men who should beat Bron Breakker for the NXT Championship.

The former NXT UK Champion is without a doubt main roster bound. GUNTHER perfectly fits the type of wrestler Vince McMahon and company prefer on RAW and Smackdown. However, it helps that the former WALTER is a talented veteran with good mic skills. Whether GUNTHER will be a success on the main roster is currently unknown, though his brief run leading into Survivor Series 2019 doesn’t exactly inspire confidence. Though GUNTHER holds the record for the longest reign NXT UK Champion in the brand’s history, NXT UK is a niche program that doesn’t have the viewers that NXT has. Before he makes the big main roster move, GUNTHER should be given a solid run with the belt, that way, he’ll be properly showcased to the WWE audiences because he’s not just another big guy and get himself over on a wider scale. GUNTHER doesn’t need the belt at this point in his character as he’s main roster ready, but he’ll make a great representation for NXT and will be a strong in-ring general for green talents.

Cesaro has been in WWE for over ten years, winning both Raw and Smackdown Tag Team titles, along with the United States Championship; however, every time Cesaro appears to be on the cusp of being a main event player, the rug is pulled from under him. The Smackdown star was getting a strong push last year with Cesaro even getting his first WrestleMania singles win over Seth Rollins. However, following his WWE Universal Championship match against Roman Reigns at WrestleMania Backlash, the company lost interest in pushing the underrated talent. Cesaro wasn’t even in the 2022 Royal Rumble! Since Cesaro is barely doing anything on the blue brand, the former United States Champion could showcase why he’s deserving of a WWE title run by going back down to NXT. Cesaro is an incredibly talented guy who’s gotten over with fans thanks to his insane strength and wrestling ability. Is he The Rock or Stone Cold on the microphone? No, but the guy deserves a shot as the top dog and giving him a run down in the developmental brand may be his saving grace. NXT also use to be the place to rejuvenate careers and it can certainly help the veteran in a big way.

Another underrated talent that really hasn’t been used to his full potential. Escobar had a decent reign as NXT Cruiserweight Champion, but he seemingly fell out of favor once he dropped the belt to Kushida. WWE has been desperate searching for their next Hispanic star. Escobar is a legend on the independent scene in Mexico, with notable runs down in Lucha Libre AAA Worldwide and Consejo Mundial de Lucha Libre (CMLL). Plus, Escobar is actually fluent in English, one of the things that held back Andrade during his time on the main roster. Escobar has all the tools to be the Hispanic star that the company is desperately searching for. Escobar deserves a nice title run at the top because he has all it factors that Vince McMahon and company should pay attention to. Is he the next Rey Mysterio? No, but that doesn’t mean he isn’t on the level of the former WWE Champion. His matches are more methodical, and ground based, but the veteran knows how to the crowd invested into his bouts. In a way, Escobar is in the same vein as Cesaro, Escobar is considered a cruiserweight in the company so Vince may not see him as a main event star. However, if Escobar is booked properly then he’ll have no problem showcasing why he deserves to be in the same league Roman Reigns or Rey Mysterio. Who knows, maybe Escobar will win the NXT Championship soon, but the chances of him defeating Breakker is slim. Should he lose, then the company can always come back to their feud and have Escobar emerge victorious.

Knight has had a lackluster run in NXT thus far. Other than his feud with Cameron Grimes, the former Million Dollar Champion hasn’t really been able to showcase the talents that he displayed in both Impact Wrestling and NWA. Knight’s gift is his promo ability, which is actually one the levels of The Rock. However, his wrestling ability is pretty good too. He’s not flashy like Ricochet or a technical master like Bret Hart, but he’s held his own against top level names. If NXT gives Knight something to really sink his teeth into then he’ll be able to attract more of a casual audience. The former Impact World Champion is the perfect WWE-type wrestler, and it just matters on whether the company can book him correctly. Remember, WWE is also the same place that gave EC3 a non-talking gimmick.

Pete Dunne made an unforgettable debut during the NXT UK Championship tournament. He was the perfect heel and the future seemed bright for the former NXT UK Champion. Dunne really hasn’t been able to recapture the magic that made him sure an incredible character during that tournament, but the veteran is still one of the better talents in the developmental scene. There’s not much else for Dunne to do in NXT, thus a run with the top belt should be fitting for the former UK star. Dunne is an elite talent when it comes to in-ring and microphone skills, and if the company let’s him go back to the sadistic douchebag he played in the UK tournament, then he’ll surely elevate the brand and championship. The purpose of the developmental brand is to make the young talents look good, and Dunne has all the tools to help the stars of tomorrow.