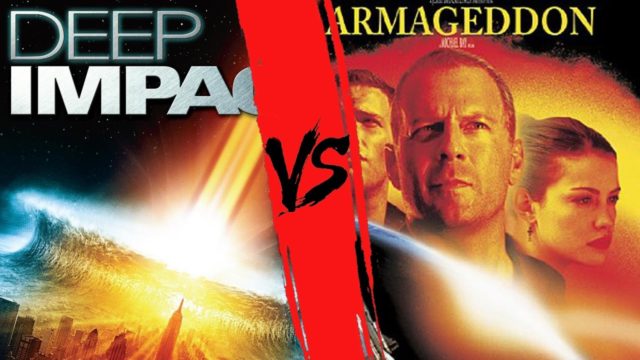 Twin films is a very common phenomenon in Hollywood. It generally happens when different studios are seeking to latch onto a script and make it in their own manner to compete with the opposition in an attempt to get noticed first. This gains a better chance of revenue and a box office reception that is more favorable as opposed to letting the other studios get a lead on them and therefore reap the benefits. It’s all a giant race to the finish in Hollywood it would seem, which is fitting really since it’s not always the film that get’s finished first that gets the attention. It’s a matter of how the films are marketed, who’s in them, and what kind of effects are present within the film. Plus, those that manage the kind of hype the film needs are often those that get the most attention.

There’s a killer asteroid heading for earth, and it’s big enough to create an Extinction Level Event. In Deep Impact the focus is largely upon this mysterious ELE as it’s believed that the name itself might be linked to a scandal. The twist is that it’s describing what’s about to happen to the earth instead. In Armageddon there’s no dancing around the fact that a meteor is going to smash into the earth, especially considering that several smaller ones have already impacted before the general public knows whats happening. In the end, a specialized team must go into space and destroy the meteor before it’s game over for earth.

One has no idea he’s being filmed, the other eventually has no idea he’d have no privacy when he agreed to filming. Both men have their lives turned upside down as the filming continues, as things just keep happening that are blown out of proportion, thereby making certain that they will continue their steady decline into depression, anxiety, and even a type of madness that seems to spark a very decisive streak of defiance.

It’s a story of the poor, downtrodden worker that wants to help but also wants more out of life than what he’s been given. Both stories get a little dark considering what the heroes have to go through to effect any type of change in their colony, but both stories see the hero leave the colony in order to find himself and come back stronger, wiser, and more determined to make a change.

The Illusionist actually came out first, but it was The Prestige that got noticed. Both films are about up and coming illusionists that seek to be the best at their particular skill.  Both are quite good, but both are doomed to failure of some sort because of arrogance, ego, and a need to continually best those around them that borders on mania. Perhaps it was the rivalry between Jackman and Bale’s characters that allowed The Prestige to steal the show.

1. Mirror, Mirror/Snow White and The Huntsman

This is the same story told in two very different ways. The classic story is one that children and adults both know quite well, but it has been revamped time and again to show the vision of the director in charge of the project. While Mirror, Mirror is far more comedic and even a bit cute, Snow White and The Huntsman is decidedly dark and almost foreboding in a way. There is little true joy in the struggle to bring Snow White to her rightful place, though the story itself is quite interesting.

Twin movies might be a turnoff for some because it does in fact reek of desperation and a need to follow the leader. This is not a very desired trait to viewers that want something innovative and fresh, but it does manage to create something for those that like differing perspectives.