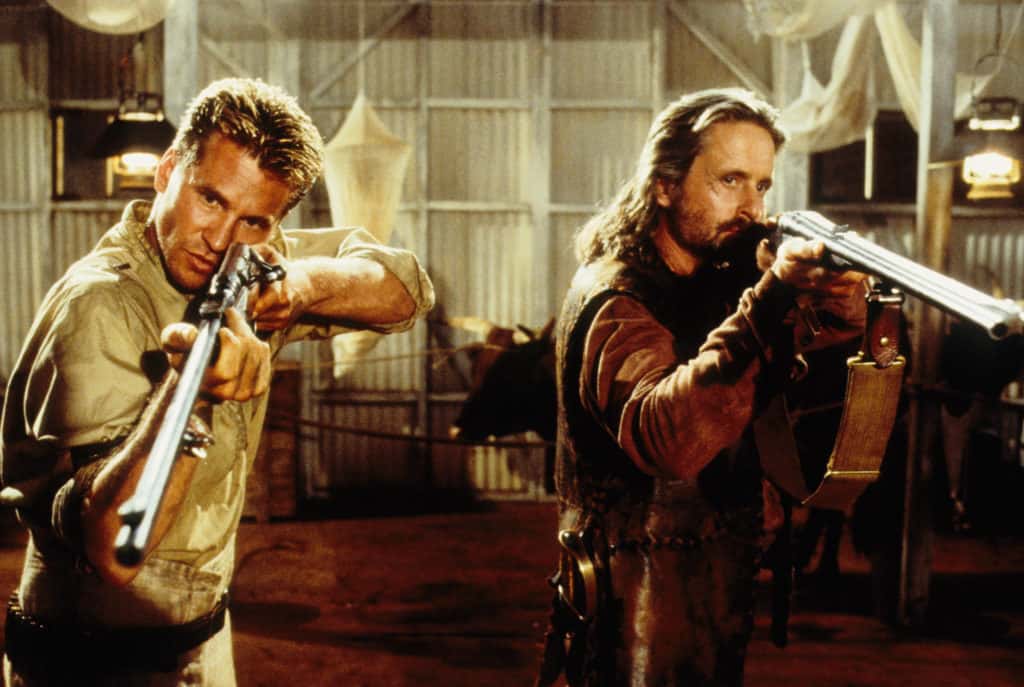 Plenty of films depict wild animals in ways that some folks don’t like, and lions often get the same treatment, not usually because they are bloodthirsty creatures, but because they have a rather fearsome appearance and, like it or not, they are meat eaters that can go off the hook if something drives them to it. People might not like seeing violence against animals in the movies when it comes to certain situations, but given that it’s all entertainment and things are kicked into high gear by creating the absolute worst, nightmare scenarios, it’s not too hard to pull for the humans that are just trying to survive. Those that are aggravating the lions can get chomped for all a lot of us care, but those that are actively trying to keep others, and themselves, safe from harm might need to be cut just a little slack. It’s true that in a lot of movies that people are constantly invading the territory of said animals, but like it or not, everyone gets to defend themselves.  Here are a few of the best movies that feature lions in a number of different ways.

5. The Chronicles of Narnia: The Lion, The Witch, and The Wardrobe

Out of all the lions seen on screen, Aslan is probably one of the most laidback and kindest of the bunch since we don’t often get to see him resorting to the base instincts that he likely still has. Bt seeing as he’s a magical lion and a peacekeeper of sorts, he’s also very likely to do things quite differently. This story has been a classic for so long that people don’t really question the place of the lion in the role he’s been given, especially since magic tends to take away a big need to really push the questioning to a degree that might ruin the story in some crucial way. So yeah, Aslan is by far one of the most inoffensive lions on this list.

Jasmine gets a lot of respect from some people on this list since despite being an older lioness and one that was brought in just to be killed on some senior hunting trip, she turned out to be a fun character and one that gave inspiration to a young Walter for a comic strip later on. The best part was that she bonded with the young boy and made it clear that she was going to protect him against anything and anyone. That look that Jasmine gives when coming out of the cornfield kind of appears to make one feel that wasn’t about to sit by and watch her cub, Walter, get smacked around, no way, no how.

This movie actually managed to get a mixed result from fans for the way that it was presented, when in truth, a lot of people felt that it would be widely accepted since the animated version was. But that’s the thing when you go from animation to live-action a lot of things change. It becomes a little too real for some people and not real enough for others, meaning that there’s no way to satisfy everyone’s desires at the same time since someone is always going to have something to say. Overall, this movie was met with enough positive reviews that it managed to become accepted, but still, people turn pretty quick when they don’t have their expectations met.

There wasn’t a lot of expectation for this movie since it came out of the blue somehow and put Megan Fox in the role of a badass that doesn’t come as believable but is still an action movie so hey, people are impressed. But when it comes to the CGI lioness, the deadliest of killers apparently, it’s not exactly the best movie, but it’s still bound to impress some people for the fact that the lioness is straight-up targeting people and taking them out one by one. The truth is that lionesses’ do most of the hunting, so it’s fair to think that they’re a little deadlier than male lions. But still, this one could have been done just a little better. Maybe a reboot can come along in the next five to ten years.

1. The Ghost and The Darkness

This is the kind of movie that paints wild animals as cold-blooded killers, but if one goes back in history and looks at what really happened in Tsavo, they might find it interesting that there was another reason, that’s been deduced, that the lions started eating humans. Normally, lions are said to go out of their way to avoid humans since they prefer bigger, meatier prey. But nearly 120 years ago, these two lions were the scourge of the railway according to those that worked it, and the man that was brought in to finish the bridge and extend the railroad on time.  Lions aren’t evil creatures, but like any wild animal, they can be motivated to kill if pushed in one way or another.

10 Things You Didn’t Know about Archive 81

The Five Best Characters from Archer