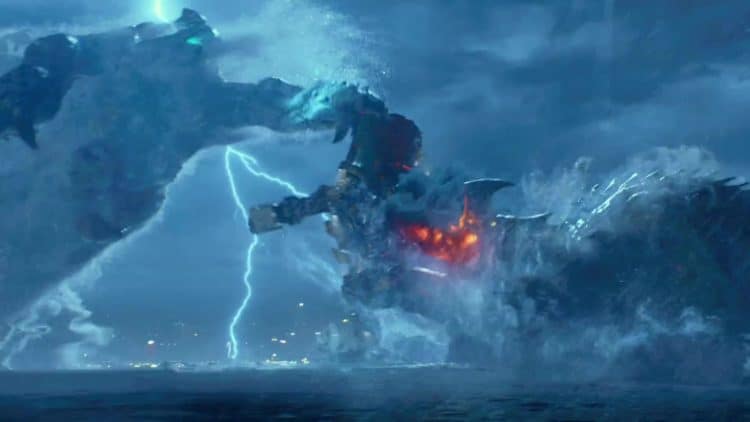 So we’ve done plenty of articles involving water, but none that include someone, or something, EXPLODING out of the water with such violence that it’s hard to call it anything else. Some clips are definitely more impressive than others but the meaning behind some of them are even more pertinent to the story than the mere action. As anyone can tell, even expert swimmers that spend their time slipping in and out of the water, it’s kind of difficult to get the force needed to explode out of any significant depth since the human body isn’t really built for this. But there are still moments in the movies when movie magic can make this happen in a very impressive way that gets people to actually believe that such a thing can happen. When it comes to other creatures though this ability is easy to comprehend since not only are they often given the type of musculature that can make this possible in the movies, but the fact that they’re needed to appear this strong and this forceful is a big reason why they’re allowed to defy what we know about breaking the surface with this kind of force. Humans just aren’t built this way, which is why some of these clips obviously needed a bit of help.

Here are some of the best scenes that involve exploding out of the water.

That must be a rough trip on the way back from hell since the force that’s exerted once the time stop ends is great enough to break the tub and send Rachel Weisz’s character flinging upward. The thing that’s interesting about this scene is that Rachel was fairly terrified since Keanu was actually holding her underwater. It doesn’t sound as though there were any trust issues involved, but the fact is that she was being held under the water and it was likely enough to make her both anxious and eventually scared so some of that thrashing might have been real. It’s hard enough for some folks just to submerge themselves.

In this scene, both of the kaiju come busting out of the water toward the jaegers, and it’s a mess of machinery not long after that since one jaeger loses its head and therefore its pilots, while the other is melted with acid and then thrust beneath the water, in effect drowning its pilots. The size of these things might suggest that breaching in this manner wouldn’t be entirely possible, but when one factors in the fact that their bio-engineered to be this insanely strong then it’s a little more feasible since they’re bred to fight, conquer, and not stop for anything, which would mean that the discomfort of pushing themselves to the limit wouldn’t be much of a concern.

3. Harry Potter and the Goblet of Fire

Magic is the key reason that Harry Potter is able to breach in the manner that he does since when one has flippers for feet and is essentially morphed into a water-dwelling creature the dynamics of their body will change, but getting used to it could take a lot longer than he was given. One might think that he’d be better off practicing some other water-breathing spell, but then again this method did allow him freedom of movement and made him that much quicker than the others. But the process did look kind of painful and in the end, he did need his wand to breach the surface once again.

There’s likely bound to be an argument that a shark the size of the megalodon couldn’t possibly breach in this manner since it’s simply too big and it would take too much effort to get out of the water. It would certainly take the ship down with it, but there’s also the idea that megalodon didn’t really get this big since shark experts have weighed in on this matter and have given their two cents and more. It is an impressive feat, but it’s not entirely realistic since when one thinks of the speed and the force that would be generated by this thing in order to get that far out of the water it’s easy to think that something would have registered right before it broke the surface, if not well before.

So in reality the jet skis in this movie don’t exactly explode out of the water, but the fact that they go so far under and then come up within the atoll is impressive, even if that feels a little far-fetched and needs the aid of movie magic. But apart from this was the fact that there was another scene in this movie where jet skis being hooked up underwater was used and it was definitely more effective since they came racing up to try and snare the Mariner’s boat.
In real life, it’s not quite as possible for human beings, but in the movies, it’s a nice effect.