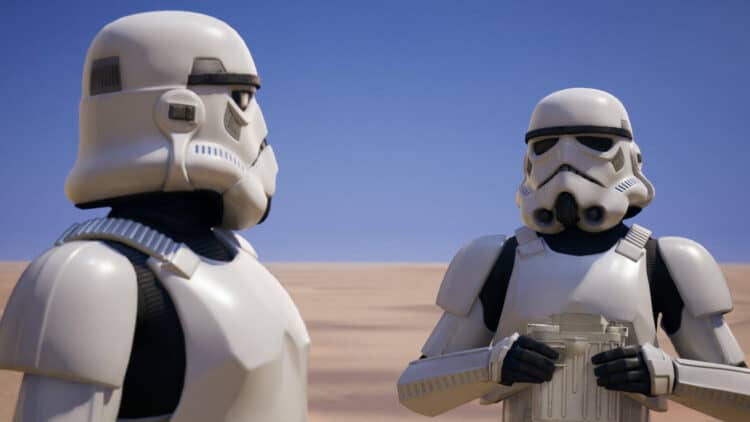 It’s way too easy to cast the blame for the horrible aim of stormtroopers on a few factors, isn’t it? Plot armor would be one of those since one has to try and imagine how individuals wearing no armor and having no other way to shield themselves would be able to walk through blaster fire without a scratch. The number of jokes that have been made concerning stormtroopers and their horrible aim is tough to count, and it’s a bit confusing when reading the novels and comic books only to learn that the most basic stormtroopers are put through some of the most grueling training regimens ever. And yet, they fall so easily that one has to wonder just how good their training really is. When it comes to target practice it feels certain that many stormtroopers aren’t really given the benefit of added training, while those that become specialized troopers might find that they’re given better equipment, better training, and are seen as highly refined tools, rather than the nuts and bolts of the Empire that are valuable in bulk but are often seen as less than important on their own.

There have been a few theories about why stormtroopers are so ineffective, but one explanation makes a lot more sense than others, and it was introduced during one of the animated series. It’s been mentioned at least a few times in the history of Star Wars that the helmets the troopers wear are a bit restrictive and don’t always allow for the best aim. Even Luke Skywalker mentioned that he couldn’t see a thing in his helmet, but it’s fair to assume at that time it was due to his lack of size since even Leia mentioned that he was a bit short for a stormtrooper. But it could have been that it wasn’t his size, but instead, the clunky, overbearing helmet that he was wearing.

Equipment is kind of crucial when it comes to being effective at anything. Given that their tasks were usually bound to put them in harm’s way, one might assume that the troopers might have been given armor and equipment that would allow them to obtain and keep the advantage against their enemies. But despite being science fiction, one has to think that trying to outfit thousands of troopers at a time could be spendy, and with the cost of two Death Stars and multiple fleets, it’s easy to think that the troopers got the short end of the stick when it came to their equipment, meaning that mass production of their armor, helmets and even their weapons would no doubt be a problem for a lot of troopers. Imagine trying to shoot straight when you can’t see; it’s not exactly the easiest scenario unless you happen to be one of the few individuals in pop culture that are capable of targeting based on sound. And no, there are no wannabe Hawkeye’s in the Star Wars universe, especially not in the stormtrooper regiments. Blaming their bad aim on their clunky helmets feels like a major copout, since it does sound like something that would be reported and possibly fixed, or so one might think.

How easy is it to get a corporation to fix something in the real world? Now think about filling out a form for new or better equipment to an Empire that’s known for sacrificing their own when it’s deemed necessary. How likely was it that the stormtrooper armor would ever get fixed? The First Order troops did manage to get a little better, but it’s always been the elite troopers that have been given the best armor, training, and weaponry, while the common troopers are essentially chum that is there to absorb blows and die in the service of the Empire. Stormtroopers weren’t exactly valued as anything other than tools since they’ve had designations, not names, for quite a while. It’s true that by using serial numbers it likely becomes easier since one doesn’t have to confuse themselves by trying to address multiple people with the same name. But stormtroopers are essentially meat machines that the Empire recruited in massive groups as they continued to use them on a regular basis.

The poor aim of the troopers could have been remedied by abandoning the helmet design apparently, but for the sake of the franchise, the helmets were kept since they not only made the troopers look a little more intimidating, but they provided at least one reason for their horrible aim. There are a lot of other reasons that people would try to push forward, such as lack of training, but trying to aim through a helmet that hampers your vision is bound to be pretty difficult. At the end of the day though, stormtroopers are the faceless, expendable force that acts as a shield for the Empire, and occasionally they did manage to hit something.