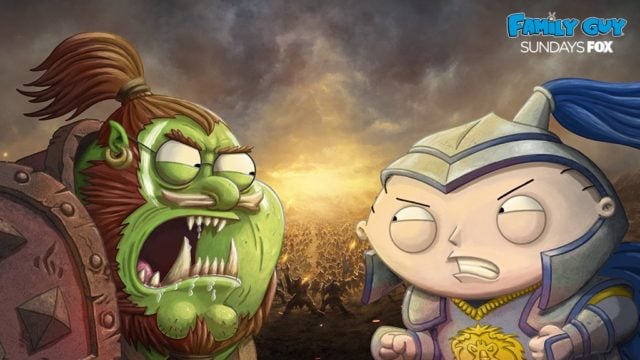 Family Guy is known for being able to cross over into the realm of other stories but so far its Warcraft episode coming out this next week sounds like it might be a bit of a stretch. That’s not to say that it won’t be good enough but so far what little there is to say about it does seem to indicate that there’s going to be a big jump from one point to another like always. In this episode Peter and the guys are pressed into serving on the Coast Guard after being caught trying to pass as military veterans. That sounds about par for the course with the guys since they tend to do things that don’t make a lot of sense and often end up getting them into trouble of some sort.

The general consensus then is that Peter will end up playing World of Warcraft out of sheer boredom and will choose an orc as his avatar. In the meantime Stewie, who’s bored at home, will start up his own faction and make his avatar into a paladin that will go to war with Peter’s faction, which seems perfect since the two of them are kind of at odds throughout the show. Stewie is as always the baby with the evil machinations and the ability to just barely tolerate his family as they go on about their daily routines of not being able to hear him despite his plain English. Ever notice that? Brian can understand Stewie and the family can understand Brian, but no one else can understand just what Stewie is saying. That’s kind of odd if you really think about it.

But back to the main idea. Stewie creating a paladin figure is just the type of messed up story that you might expect since the kid is anything but upright and virtuous and would likely be better off playing a blackguard or someone just as heinous that rules over his people with an iron fist. But all in all it could be an interesting show since Peter vs. Stewie has provided some great entertainment in the past. Of course if it was Lois vs. Stewie it might be even better since the two of them have tangled in past episodes and really torn into each other. Maybe Lois playing World of Warcraft though wasn’t as feasible, though it seems like it would open up a lot of possibilities that McFarlane would be able to run with. Maybe he thinks it’s a lame duck idea though. meaning it it’s just too easy and therefore not worth his efforts. Stewie vs. Chris would have been interesting since Chris is so mild-mannered in real life that seeing him as a slobbering orc in the game would have been awesome.

Meg of course gets left out of this as usual since Meg is kind of the add-on character as always that only ever seems to get a shot on the show out of what might be pity or just a need to remind people that she’s still there.