Home
Television
Moonshiners
Exactly How Real Is The Show “Moonshiners?” 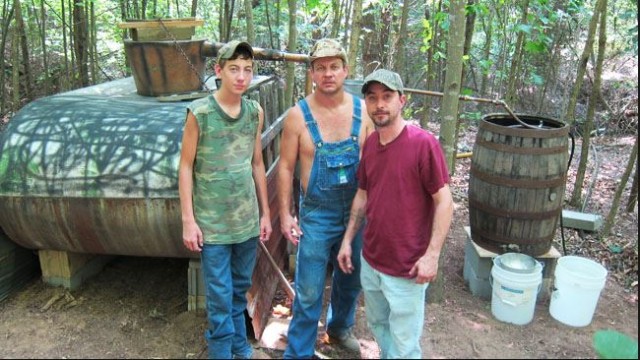 When the show Moonshiners first aired, nearly three million people were glued to the edge of their seats watching the program. While most of these people had never seen the process for creating moonshine, it was nevertheless some great mystery that most were anxious to have some answers about. However, moonshine itself is an illegal alcohol that is made and distributed (also illegally). So how are the main characters of this reality television program not locked up in jail? Is this to assume that show itself isn’t real at all (or just more of a dramatization now more than ever)?

This is actually kind of a loaded question because there is no real substance on either side of this fence to appropriately answer it. For example, if you consider the point that many people make about camera crews filming this illegal activity, they are well within their legal rights to film anything that they choose to without persecution from the law. You can liken it to Sean Penn sneaking into Mexico to meet with one of the most wanted fugitives in the world, El Chapo. He was able to put together a rather impressive interview with the man, but when he returned to the United States, many suspected that he would be facing criminal charges.

The truth remains that he could have filmed the entire interview and not doing anything wrong. As the camera crew with the Moonshiners is not helping them to actively evade police or to create the moonshine, they are merely documenting it. Also, these alleged crimes would have happened several months prior by the time they ever reach the air, meaning that evidence beyond this reality show is likely to no longer exist.

There is a burning concern that the show is nothing more than a dramatization, and that is what the Virginia ABC Bureau of Law Enforcement has released statements to suggest. Their take on the situation is that if they were under any suspicion that actual illegal activity were taking place with the production or distribution of unlawful moonshine, that their department would be there immediately to arrest all parties involved and to put a stop to it.

According to this primary office within the state, the show merely has been offering viewers an exciting spin on what making shine actually looks like and the idea that they are somehow eluding law enforcement with their distribution techniques. According to the main man of the show, Tim Smith, he is always hopeful that the majority of people can see the authenticity of what he is doing and root for the multi-generation moonshining family to continue to escape the law.

It is hard to say whether or not the show is still authentic this many seasons into it, as logic would dictate that if illegal activities were being filmed that law enforcement could track it somehow. Regardless of which side of the fence that you might land on, the show remains wildly entertaining several seasons in, and does not show signs of slowing down. Unless of course, the law does catch up with them one day.