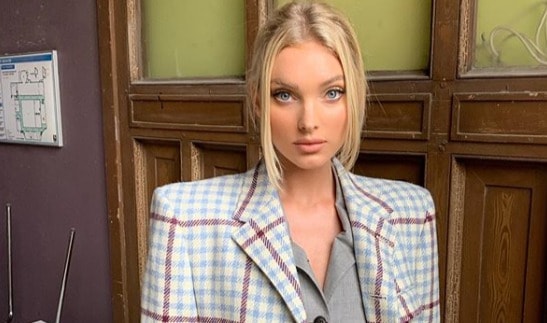 Elsa Hosk might not be nearly as recognizable to you in her everyday clothing because you’re more accustomed to seeing her in very little when she’s working. She’s a Victoria’s Secret Angel, and she makes her living modeling very little clothing for the masses. Aside from her job as an Angel, she also models for other designers. She’s graced ad campaigns for H&M, Dolce & Gabbana, Dior, and even Lilly Pulitzer. She’s gorgeous. She’s talented. She’s making waves in the modeling industry, and she’s not going anywhere anytime soon. Here’s what you need to know about this gorgeous model and all she’s doing in her life.

You might not believe that someone so gorgeous and talented in the modeling agency would risk injuring her pretty face, but she did. She was not always a model. In fact, she’s not just talented on the catwalk. She’s good enough playing basketball that she was able to play professionally for two years when she was slightly young. She began playing in Sweden, and she credits the two years she played professional basketball there for preparing her for the intense and rigorous schedule modeling offers.

2. She Gave Up Modeling for School

Her father was certain she would be a model when she was only 13. He began sending off photos of her to all the modeling agencies he could find, and she was signed and professionally modeling by the time she was 14. She liked it, but she felt that her education was more important. When she began high school, she began spending more time on her studies, less time on her modeling, and eventually began turning down all the job offers she was given so she could focus on her education.

Elsa is born and raised in Sweden, where her father is Swedish and her mother Finnish. She was raised in Stockholm, which is her hometown. Her family resides there, she visits often, and the area is lovely. She didn’t move to the states until she was older. She left Sweden to move to New York City, and that’s where she really started to see some movement in her modeling career following the end of her pro basketball career.

4. She’s Not the Only Model in the Family

Sometimes, you get fortunate and you end up doing something that no one else does, but not Elsa Hosk. Her family is multi-talented, and her cousin is also a model. Her cousin is Alice Herbst, and she’s equally gorgeous, talented, and successful. She models, too, and that makes it a little easier for her to have some support in the business. We think that it’s amazing that she has that kind of talent in her family.

5. She Works to Prevent Human Trafficking

After seeing “Whistleblower,” she became very aware of the dangers and the horror of human trafficking, and she has been working diligently to bring awareness to this ever since. She’s been working to ensure that the entire crime ring is brought down, and that it’s not something that anyone ever has to live through. She is an advocate for safety and awareness, and we think that she is the kind of woman that other women should look up to in that aspect.

6. It’s Rumored that Queen Elsa from “Frozen” is Modeled in Her Image

There is nothing that makes this true, but the rumor is still out there. She’s from Sweden. She’s blonde. She’s gorgeous. She is powerful. There are some who say that the most famous Elsa in the world, sister to Anna, Queen of the Ice Powers, and the singer of the song no parent can ever get out of their head is modeled after her. She says this is not true, but we can see how this might be a little bit possible. What a cool rumor to have spread about you.

7. She Almost Took Down Ariana Grande

Do you remember a few years ago when Ariana Grande performed at the Victoria’s Secret Fashion Show in December? Well, Elsa Hosk was the angel who walked down the runway and almost knocked the singer down with her wings. She felt terrible about it, but she didn’t top working as she was doing her job and knew what it meant. The singer was all right, and everyone was able to laugh it off

She’s been know to say that when she sees herself in photos, she doesn’t always see herself. The editing, the cropping, the change to the photos is always shocking to her. She says that the clothing she has to wear in photos is also not very much who she is, so she never recognizes herself in those little clothes because it’s not how she looks on a regular basis.

If she had things her way, she would be home doing things that are low-key and important to her rather than being out and about in the spotlight all the time. She doesn’t like the crowds, and that means she’s not a festival girl. So, while you may see her at big events, festivals, and shows, she’s not always happy to be there. She might enjoy the perks and the people she gets to spend time with there working, but she would much rather be anywhere else in the meantime.

10. She Doesn’t Find Herself Sexy

Elsa Hosk wants you to know she’s not sexy. That might not be what it looks like to those who don’t know her personally, but she is the least sexy person in the world. She doesn’t find herself sexy at all, and she doesn’t behave that way. She’s goofy and silly and funny and she likes to be kind of laid-back all the time. She’s not the kind of woman you see on the screen and in print, and she wants to make sure people know she’s not perfect all the time.