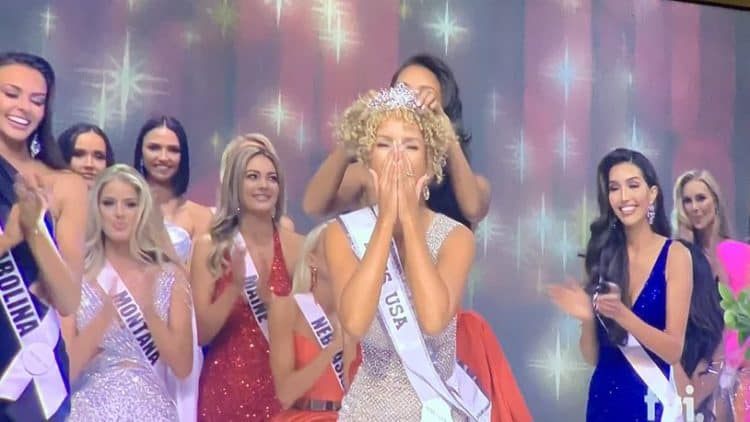 In what seems like the blink of an eye, Elle Smith has gone from living a ‘normal’ life to being the most well-known pageant girl in the country. After winning the Miss Kentucky pageant earlier this year, Elle was crowned Miss USA in November of 2021 making her the second woman from Kentucky to earn that honor. With the perfect combination of beauty and brains, Elle has taken the world by storm and her journey is only getting started. Not only is she enjoying her latest crown, but she will now represent the United States at the Miss Universe pageant which will take place in Israel in December of 2021. Keep reading to learn 10 things you didn’t know about Elle Smith.

1. She Is An Ohio Native

Although Kentucky is the state that people have come to associate with Elle, she is originally from Ohio. She attended Shawnee High School in Springfield where she graduated in 2016. During her time in high school, she was involved in several activities including drama and volleyball.

2. She Attended The University of Kentucky

Education is something that has always been important to Elle. After graduating from high school, she went on to attend the University of Kentucky where she earned a bachelor’s degree in broadcast journalism. After graduating, she was hired as a reporter for WHAS-TV in Kentucky.

Elle is an adventurous person and she loves to get out and have a good time. Traveling is one of her favorite things to do and she’s gotten the opportunity to visit beautiful places all over the world. Some of the countries she’s been to include Mexico, Italy, and Jamaica.

4. She Is In A Relationship

Now that Elle is officially Miss USA, there are probably lots of people who can’t wait to slide into her DMs. However, all of those people might want to pump their brakes. From what we can tell, Elle is in a happy relationship although it’s unclear how long the couple has been together.

5. Miss Kentucky Was Her First Pageant

Many pageant girls start their careers during childhood, but that wasn’t the case for Elle. She didn’t develop an interest in pageants until she was in college. Not only was Miss Kentucky her first time winning a crown, but it was actually her first time competing in a pageant.

Overall, Elle has been pretty private when it comes to her personal life. However, we do know that family is very important to her. Elle is the daughter of a white mother and a Black father and she is very proud of all of the cultures that have come together to make her the person she is.

7. She Is A Positive Person

With all of the negative things that constantly happen in the world, it can be difficult to see the silver lining. Elle, however, always does her best to maintain a positive outlook. Her positive disposition is evident in the way she lives her life and handles herself on stage.

8. She Used To Think That Pageants Were Exploitive

Before Elle began competing in pageants, she was not a big fan of them. During an interview with KRNL Magazine, Elle said, “I used to be one of those people who was like, ‘pageantry exploits women, there’s really no benefits, it’s old school, there’s no reason for women to do it,’ and competing completely changed my perspective of it”.

While it’s true that getting her degree was her main priority in college, Elle was also involved in other things. She joined a sorority called Alpha Delta Pi. In fact, it was being involved in this sorority that really made her focus on pageants because many of her sorority sisters had done them.

Even though pageants weren’t always on Elle’s priority list, it appears that she was always destined to be on a stage. Performing has always been a part of who Elle is and now she’s in the spotlight in ways she probably never imagined. While talking to KRNL Magazine, Elle’s mother said, “When she was a little girl, she knew every single lyric to Broadway musicals. I literally would walk out into the hallway and hear her singing the top of her lungs and I would crack the door open and try to take videos of her cause she would just be in there dancing and singing away to musicals”. Hopefully, the world will get to hear her voice one day.

Is It Okay To Make A Funny Slavery Movie?
Comics Lists News Things You Didn't Know Whatever Happened To