Last night, the witches of Eastwick amped up their powers and uncovered more secrets that made the show feel like the earlier days of Desperate Housewives. In short, the episode was bewitching at best.

The night opened with Roxie having another dream about Jamie, the lunatic who she saw trying to kill her in a premonition last week. This time he is burying her alive and Roxie catches a glimpse of a symbol branded on the side of his torso. The next day at her shop, Roxie tells the story to Joanna and Kat, who both think that she is paranoid. But Jamie shows up with news that he signed the lease to the apartment above the shop and Roxie balks.

Joanna and Penny look for more dirt on Darryl van Horn, but only find news clippings about a young rich man named Sebastian Hart who drowned in the town’s river or lake and also tried to purchase the Lennox mansion as well. Then the clincher comes in a picture that showcases a younger version of Darryl. Joanna decides to contact the writer of the articles, Milton Philmont (guest star Martin Mull). When Joanna meets with Milton, he doesn’t remember writing the articles. Joanna uses her power of persuasion, but although Milton still can’t remember writing the articles, he does remember that Sebastian hung around three women and that he was scared of Sebastian for a reason. In short, Milton is the victim of a glamour. Meanwhile, Will asks Joanna out numerous of times, but the sad thing is that Joanna knows his attempts aren’t real and doesn’t follow suit with his advances. Those damn spells!

After learning that Bun is healthy but still in a coma, Kat finds out that Raymond has a clean bill of health as well. Raymond is so well that he wants to come home and work things out. I suspect that it’s because he has no place else to go, but that’s just my jaded view on life. Kat gives him one week and then he has to go, because she rightfully can’t let go that Raymond accused her of being an unfit mother and attempted murder not only three days ago. Again, I would have left him at a homeless shelter. But once they get home, Raymond seems highly genuine in his attempts to reconcile and it shows. As Kat preps her daughter for the town’s Harvest Fest performance, Raymond notices how good he has it.

Meanwhile, Darryl joins the women’s ritual of martinis unannounced and delivers gifts: A silk nature toned nightie for Kat, a bottle of perfume for Joanna (for the snooping journalist ‘to better sniff out the truth’), and a set of spirit dice for Roxie. Let me explain the spirit dice for a sec: the legend says that if you role one, you can see the past; if you roll two, you can see the future; and if you roll three, you can change fate, but the outcome is always chaotic. Pretty nifty, huh? I bet all these come into play later.

Roxie has her hands full with Darryl, as she is about to start on his sculpture. Turns out that Darryl also hired Chad as a handyman around the house, which creates tension and jealousy between Roxie and Chad, especially with Darryl’s never-ending advances to Roxie. When Chad overhears the incident with Mia and her boyfriend Gus, Chad gets jealous and later asks Roxie for a drawer in her house to put his things when he stays the night. Roxie is reluctant, because she hasn’t really gotten over her husband yet. While handling those two, Roxie also has to deal with Gus, who has taken the role of being a snotty taunt towards the mother and daughter team. Because of Gus’s smug attitude, Mia doesn’t want to go to Harvest Fest and this pisses Roxie to no end. She goes and corners Gus with her Jeep and gives him the third degree. After Roxie confronts Gus about Mia, Gus retorts that Roxie is nothing but a slut who killed her husband to sleep with the town’s population of men and that Mia didn’t fall too far from the tree. Claws out, Roxie scars Gus by nearly running him over. Never screw with a witch, dude. 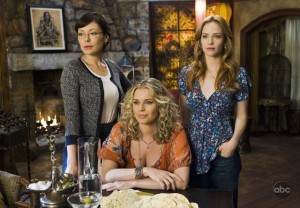 After seeing Kat be a great mother to his kids earlier (which brought out the good side of Mother Nature in the form of an abundance of butterflies), Raymond approaches Kat while she waters the garden in the nightie that Darryl bought her and while they discuss their impending divorce, Raymond gets nostalgic and apologizes when he realizes that he was about to lose the love of his life. Kat reciprocates the feelings and the two go at it while the garden literally blooms all around them. I am loving that Mother Nature power of Kat’s!

Joanna and Penny decide to break into the Eastwick Historical Society to retrieve files on Sebastian Hart. I would think that such files would be at the courthouse, but… heh. Once the women get in, Joanna finds a fat file on Sebastian, but a dog appears out of nowhere and attacks, snatching the files out of Joanna’s hand and eating them up fo good measure. Joanna manages to snag a photo of Sebastian/Darryl with three other women, one of them being Bun, and escapes.

The morning after their romp in the garden, Kat breaks Raymond’s heart by telling him that the sex was goodbye sex and not make up sex. She is tired of being the only breadwinner and it will take more than love making for Raymond to step his game up with her.

Roxie gets some initial unwanted help from Jamie, who helps fix her tire. He drops some info out about his reasons for coming to Eastwick, which involves him writing a book about the town and it’s history of witchcraft. Roxie checks to see if he had the branded symbol and he doesn’t, which calms Roxie’s nerves a bit.

Joanna tells Penny about the other visible woman in the photo (the last woman in the photo has her face turned from view). The woman’s name is Eleanor Rougement and she is still living in Eastwick, but secluded, and is their only way of getting answers since Bun is still in a coma. But unknown to Dynamic Duo, Bun finally awakes!

During the night of the Harvest Fest, a lot of stuff comes to a head. Raymond gets his job back as the Supervisor of Wicks and Wax at the candle factory, courtesy of Darryl of course. Mia actually shows up to the festival and gives Roxie new incentive to make things right with Chad, who is furious about being left out of Roxie’s life and jealous of Darryl. But Chad has some other girl on his arm and goes to dance with her instead. Later, Roxie gets super jealous and lets him have a drawer in the house. Chad is pleased. Joanna and Penny decide to go find Eleanor Rougement (guest star Cybil Shepard), who looks like a voodoo woman. Joanna also notices the same symbol that was seen on Jamie’s torso in Roxie’s premonitions. When asked about Sebastian, Eleanor says of course she knows him since she was the one killed him. DUN DUN DUN!!!!!!

Eleanor closes the door, but when Penny and Joanna continue to knock she appears with a shotgun this time. Joanna tries to do the persuasion trick and Eleanor laughs it off. The women then go to the festival and Will tries again to pick up Joanna, who agrees to a dance. While dancing, Darryl cuts in and warns Joanna about her snooping and that she should let ‘sleeping dogs lie’. While at home later, Darryl plays with the spirit dice and his dog, the same one who attacked Joanna and Penny. Whoa.

Meanwhile, Jamie watches the festival from his apartment and then brands himself with the symbol that was seen in Roxie’s premonitions and on Eleanor’s front door frame.

The show ends with the children’s performance and Gus being in charge of the lights. He spots Roxie in the crowd and she senses him watching her. She turns to face him intently, and Joanna and Kat do so as well. The three women’s looks freak Gus out causing him to trip and fall off the balcony; hanging himself on the lights in the process.

This episode was way better than the pilot and the mystery is top notch. Who are the three women in the photo? Well they have to be Darryl/Sebastian’s previous coven, but the real question is do they still have powers as well or did they lose them when they ‘killed’Sebastian? Also, who is the third woman? Could she be the mother of Kat, Roxie, or Joanna? Or some other woman we have yet to meet just yet?

I am enthralled. What about you?