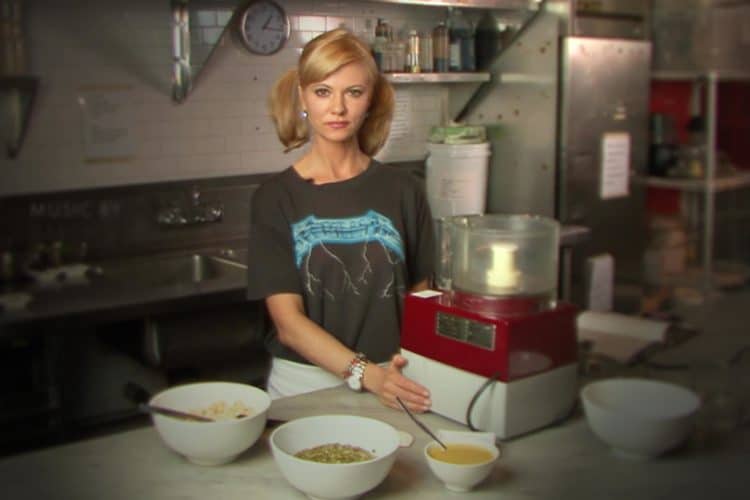 There’s a new crop of women in town. They are hardworking, intelligent, and are shattering glass ceilings career-wise. From the outside, they look sophisticated, untouchable, and not even an Alec Baldwin can break through the walls they have built to protect themselves, until the right swindler comes along. Netflix is on the hunt for this type of woman. Only three months into the year, the streamer has already set tongues wagging with its account of the fabulous life of a fake billionaire’s son, Simon Leviev, bankrolled by incredibly smart women who are dumb when it comes to love. As if we viewers are not worthy of a breather, in comes Sarma Melngailis, who considers herself an outlier in every sense of the word. Sarma looks everything like America’s Next Top Model. Had she not opened a high-end vegan restaurant that was way ahead of its time, she’d be giving one of the Hadids a run for their money.

Sarma was always destined to be a restaurateur. Although her first job was in line with her major in economics, her magazine subscriptions told a different story. Sarma was more interested in Gourmet and Food & Wine while everyone around her was focused on The Wallstreet Journal. After a year and a half of working at a job she didn’t like, she called it a day. She enrolled in culinary school and soon after turned her attention to where her passion lay. Sarma’s next stop would be in the arms of star chef Matthew Kenney, with whom she began a relationship. The couple had a dream of owning a restaurant, an achievement they managed with the help of Jeffrey Chodorow, a renowned restaurateur. Up until this point, there’s not a blemish in Sarma’s story. She and Kenney began Pure Food and Wine with a purpose in mind; taking vegan mainstream. Almost immediately, it became a celebrity hotspot. In the words of Jim Switzer, the then operations manager at Pure Food and Wine, “What was really a tiny little room felt enormous.” Together, Sarma and Kenney lived the American dream. Every day was a party for a number of years until all hell broke loose.

Sarma was in many ways the glue that kept the restaurant running if Kenney’s bad money habits were anything to go by. Resentment crept in, and before they knew it, they had first-class tickets to a trip downhill. Jeffrey Chodorow had to choose sides, and he bet his money on Sarma. Just like that, Kenney was out. Chodorow’s choice was proof that Sarma (at least at the time) was the high-achieving woman who could get things done, whether a partner was in sight or not. Following the breakup, Sarma’s dog Leon came into the picture. He helped her cope with the sadness in her personal life. At the restaurant, she was a happy-go-lucky character who brought life to everyone around her, but behind closed doors, she was broken.

Vulnerability has a way of bringing out the worst in us, often through our interactions with other people. If we’re unlucky enough to stumble upon the wrong person at the wrong time, life can take a shocking turn. For Sarma, the pivot came in the form of Shane Fox, a tweep who had quite a huge following. He was interacting with Alec Baldwin frequently, and Sarma, who had a history with the actor, took it as a sign. After a few months of texting back and forth, the pair met. It didn’t take long for Sarma to warm up to Fox. She felt like she had known him all her life. He was bonding with her dog and eventually became a familiar face at her restaurant. Details about Shane’s life were sketchy. He claimed to be involved in unofficial under-the-radar military operations, and couldn’t reveal much. He also gave the impression that he was a wealthy man, and was often seen in Rolexes and high-end cars. Sarma didn’t probe any further. The lesser she knew about him, the better.

People around Sarma were suspicious. When they dug up information about his past felonies and unmasked his real identity, Anthony Strangis, she dismissed them. She was upset for a while until he lured her back in. The King Cole bar, where Sarma professed her love for Anthony, became the couple’s monument of love. In his quest to show her he was an affluent man, Anthony began showing her expensive jewelry. He was also engaging realtors. Somehow, he never got around to making payments. Something would always come up. His big gesture of love was paying off Sarma’s $2 million debt owed to Chodorow, and that came with the price of getting married. Sarma became Mrs. Fox. The next few years of Sarma’s life would play out like a bad movie.

Sarma was introduced to ‘Will’, who asked for all her passwords and bank account details. Anthony had learned that Leon was the most important thing in Sarma’s life, therefore he used the dog to sell her a ‘happily ever after’. In a twisted way, Anthony had a past life, and Leon was in it. He’d apparently lived through a set of lifetimes, and Sarma was the one he was looking for. He called her a tiny blonde human because he was meant to be an ‘outlaw nonhuman’. All the love-bombing that was coming her way was enough for Sarma to let money flow out of her accounts. With the promise of a better future, she drained both her personal accounts and the restaurants’ finances, to a point where she couldn’t make payroll. By the time he was done with her (only because the law had caught up to them), Sarma was on the run.

To date, Sarma maintains her innocence, but a few things do not add up. We all mess up, but living on the other side where we rectify our mistakes comes with accountability. For someone who ‘wasn’t on the run’, she willingly changed her name and covered up her tattoo with band-aids. She’s a victim, but also an enabler. As a grown woman who can pull in three hundred guests a night at a restaurant and attract top-notch clientele, there’s no way the red flags could have gone unnoticed. Perhaps she was in too deep and didn’t see any way out. That would be understandable. Even then, the ending of the documentary tells it all. Anthony was a master manipulator. Only a sweet-talking psychopath could get a victim to be so nonchalant after being scammed. On the same note, only a woman in love can do the crazy things Sarma did, even when the guy is not worth it. Love alone is never enough. To the gifted, independent woman who has everything going on; when emotion does not meet logic halfway, keep it moving.