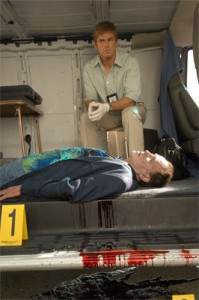 “You think you know someone and then it turns out you don’t.” – Deb

Deb’s (Jennifer Carpenter) sentiments to Dexter (Michael C. Hall) midway through this season’s finale not only served as the perfect harbinger of what must surely come between the two siblings in the future, but also as a synopsis of the whole of Season 5. Just when I thought I really got to know Dexter after last year’s epic season, it turns out I may have idealized my favorite serial killer a bit too much. Like Lumen (Julia Stiles), my dark passenger seems to have suddenly taken a backseat.

It often felt at times this year that I wasn’t even watching the same show. Subplots seemed to disappear in thin air. Character motivations seemed iffy at best. And there was a tangible lack of chemistry throughout that was hard to put a finger on. Willing to reserve final judgement into the finale, The Big One only confirmed the season’s worst’s traits, leaving me much like Dexter at the end of the episode: rather dead inside.

Perhaps this was the night’s biggest flaw. All that growth, all that change and atonement tossed away in a single, final line. It’s a shame…and a mistake. Asking us to continue on this seesaw of possible change all season (every season) without giving us any kind of emotional payoff is like sex without the orgasm: sure it feels great while you’re in the middle of it but by the end you’re so frustrated you could just kill someone (or so I’ve heard). Dexter deserves better. We do too.

Because here’s the thing: if we know Dexter can never change, the show’s over. Contrast the way Season Five ended with the wedding to Rita at the end of Season 3. We wanted to see how the hell Dexter would ever manage married life because we wanted to see him succeed. But now it seems as if the show has backed itself into a corner. If Dexter has given up, then why shouldn’t we?

Pacing was also a problem here. While the first fifteen minutes seemed to just be killing time (enough with Jordan (Jonny Lee Miller) driving around!), the last fifteen were so incredibly rushed they seemed almost tacked on. Lumen’s turnaround was so quick that it almost didn’t feel real. And Quinn (Desmond Harringon)? WTF? Was anyone buying that he would take a murder rap simply because he was in love with Deb and wanted to protect her? Or even that he would simply be perfectly fine with the fact that Dexter is a murderer? We’ve seen him be a selfish prick for two years, and while it’s been enjoyable to watch him get in touch with his soft side, turning him into Richard Simmons is something else entirely.

Other things that just failed: Deb’s shot at Jordan’s crime scene. No one noticed the bullet hole? And despite a very solid performance from Jonny Lee Miller all season, last night’s “How To Look Like A Menacing Villain 101” actually had me laugh out loud. This seemed to be more of a direction issue, with Jordan being such a reserved, controlled antagonist all season, trying to suddenly show us his true, maniacal self in one sequence came off as rather silly.

And then there’s Deb. Despite wrestling with her own Ice Truck trauma here and there this season thanks to the torture videos, I still wasn’t quite buying her decision. She’s still too good a detective. I like that she’s losing some of her moral superiority, that we can see her dark side beginning to emerge. But the whole scene seemed like a giant tease (albeit the best scene of the night). The problem is that it felt a lot like the rest of the year: repetitive.

Much like childhood wishes that never come true, I had my own wishes for “The Big One”. I wished that a nemesis would be freed from ending up on Dexter’s table. I wished Deb would have discovered something about Dexter to leave us hanging for Season Six. But above all, I wished we hadn’t spent a season watching Dexter go through perhaps his biggest transformation yet only to revert back to the same place we’ve visited so many times before.

You can only paint-by-numbers for so long before you start to forget that you’re trying to make art. If last season was Van Gogh, this season was a coloring book that failed to go outside the lines. In a way, it’s the show’s own fault for giving us such excellence in the past. The irony is that while Dexter seems clearer than ever before about who he really is, the same can’t be said for the show itself. At least not until Season Six.