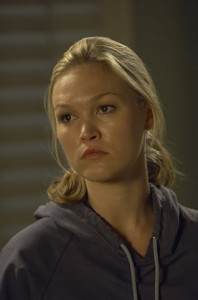 Nothing says true love quite like a knife through the heart. When Lumen (Julia Stiles) emerged wearing her full murderer garb, complete with the shiny new gloves Dexter (Michael C. Hall) lovingly bought for her, it marked a turning point in their relationship. “You look perfect,” Dexter tells her, and we can’t really argue with him.

That’s because, despite the inevitable backlash that is sure to come from those fans securely in Rita’s camp, Lumen is the only person in five seasons who has completely accepted Dexter for who he is. Arguably, she’s the first person he has ever truly loved, because she sees him and doesn’t turn away. I was weary of this development from the moment Lumen was introduced, but the way it was handled was close to perfect. We can see it in the way Dexter looks at her throughout 5.10. She’s not just his partner anymore, she’s his soulmate.

Whether or not you like this development, it does raise really interesting questions as to how the writers will carry this out. I can’t see them killing Lumen after what they did to Rita. Yet I can’t exactly see her sticking around either. What do you think? Is this more future heartbreak for Dexter? Or could this really be a permanent transformation, one in which Dexter finally accepts himself (for better or worse)?

There were plenty of other great scenes and twists throughout, including the DNA standoff with Jordan Chase (Jonny Lee Miller). Dexter is at its best when the subtext meter is at full volume, the not-so-thinly veiled threats darting through the air. The mislead of the kill room was also a fine moment of tension, for as much as we knew it probably wouldn’t happen, a part of us really wanted to see Deb (Jennifer Carpenter) burst in as that knife came down. It’s the money shot of the whole series, a foreshadowing tease that reminded us of what inevitably has to come.

And how about that sick relationship between Jordan and Emily? Not only was it a nice surprise, but it really made me curious as to the possible psychology going on here. Is this a Stockholm Syndrome thing? Or is it something even more twisted? There’s still something about the whole “band of brother torturers” that bothers me, some element of unbelievability at its core. (And what was Emily counseling them for?) But I’ve come to accept it as the baseline for a somewhat below average season, at least in terms of what I’ve come to expect from Dexter. And what happened to the entire black magic killings subplot?

Much of Season Five’s success, of course, relies on the final two episodes to come. While Deb closes in on Lumen, Robocop closes in on Dexter…yet Dexter will be misled into believing it’s Quinn (Desmond Harrington). Will Quinn make it out of this season alive? How will the writers make sure it’s not just another Doakes retread? Most likely Quinn will be spared. I hope so, because his transformation to being able to let go of his pursuit of Dexter finally gave him the depth as a character he needed.

“We both met each other at the right time,” Dexter tells Lumen. Maybe. But it could also turn out to be the worst time possible. That’s the beauty of this show over the years, we really can’t guess where the end of each season will end up. All we know for certain is that the body count will multiply.