Could Dexter be on the road to redemption? When season four ended with the death of Rita at the hands of the Trinity 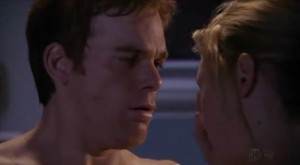 Killer, it left season five as an open book. How would Dexter react? What would his future hold? Would it make him a more hardened killer, more prone to mistakes, would his personal experience cause him to break “the code?” All of these things swirled around in my head, but I can’t honestly say I expected him to start down the path to redemption.

His very first thought after finding Rita in the bloody bathroom was guilt; that his choice to “learn” from Arthur Mitchell instead of killing him when he had the chance is what caused her death. His next move was to listen to The Dark Passenger and get revenge on whomever he could to assuage the guilt he felt. Previously, Dexter had been attempting to turn from his dark side for a family he never fully appreciated, and around which he never felt truly at ease.

I’ve tried to put myself into Dexter’s place. A child born of murder, rescued by a broken man who thought his situation meant he wasn’t salvageable. The impact the choices of his adopted father had on him was shattering. He never stood a chance at being a “normal” man. His own mind is realizing that for the first time since this season. Not only did his vision of his father tell him he was proud of him, he said he wished he had known Dexter had the capacity to care so deeply for others, as it might have changed the path that was chosen for him. Those were powerful, chill-inducing moments to me as a viewer; if I was Dexter they would have left me reeling.

His overzealous desire to listen to The Dark Passenger after Rita’s murder lead him to Lumen. Right in front of him was a woman in peril. A woman who needed his help. Unless I am wrong, the men he chose to kill in the past were garnered from his police work. He had a never ending supply of victim’s to avenge. But, to avenge a woman he was then to meet? A woman he didn’t even know he was avenging when he killed for the others? Another life altering moment for Dexter. I loved that he didn’t run and didn’t choose to kill her (even though the code would not allow it). He saved her despite her witnessing his crime. He treated her wounds and eventually confided in her. By doing so, he allowed himself to find the one other human on the planet who, at that moment, could understand his motivations. 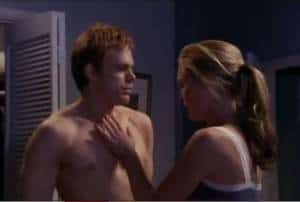 Lumen doesn’t look at Dexter with disdain or fear. He saved her. She trusts him implicitly. With Lumen, Dexter is no longer afraid of intimacy. While they did become lovers, the intimacy began long before that act. To let her into his life in such detail, share with her his avenging Dark Passenger…when he first let her watch as he killed one of her tormentors…it was so intimate I felt like I was intruding. It was like watching a couple make love. A strange idea when they were murdering a man, but that’s how it felt to me. As if there was not another act in the world that Dexter could do that would ever feel as profoundly personal as that moment. They essentially bound their lives together with an intrinsic trust. To challenge that would mean the end of one, or both of their lives.

The longer they are together, the more Dexter is able to feel. To be the Dexter he has never been. He is finding inside himself a caring man, a man who will put his own life on the line to protect the life of another, like he did with Astor’s friend. He is allowing himself to give selflessly and to love others. Until Rita’s death, Dexter never felt responsible for anyone. The closest person to him was Debra, and he even flinched from her touch, a sisterly hug.

With Lumen he has made love, probably for the first time in his life; with Astor he has given love and held hands; with Harrison he has learned how important his own influence will be when molding his future; and he has finally expressed the importance of Deb’s role in his life by leaving Quinn alone. All of these actions are providing framework Dexter needs for redemption, to become a real man rather than the puppet of his father and the slave to his Dark Passenger.

With the season finale only days away and a sixth season in the wings, and despite the perilous situation he is in, the future actually looks bright for Dexter Morgan.