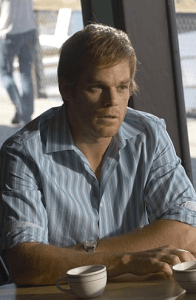 Is it possible to atone for one’s sins by preventing someone else from making the same mistakes? Check out Michael Mahoney’s review of “First Blood” here.

“First Blood” is the fifth episode of the fifth season of Dexter. We find Dexter dealing with and helping Lumen, Harrison drawing blood, Batista suspecting his wife of infidelity, and more dead bodies found, presumably killed by the Santa Muerte Killer that the Miami police have been looking for.

Dexter and Harrison are playing with other parents and children, and one of the other children ends up with a small cut on his face, which Harrison is responsible for, hence the title (“First Blood”) of the episode.

Dexter takes Lumen out for coffee, and he tries to convince her to leave town and go home to the people who care about her. She tells him that she can’t do that. He hands her a plane ticket to Minneapolis, and she seems shocked and appalled that he wants to get rid of her. He tells her that he just wants her to get on with her life. She gets up and leaves, but she takes the ticket.

Deb and Batista go to the hospital to talk to a young boy who may have information vital to their case. He doesn’t know much, but is able to draw a tattoo that the man had on his hand.

Back at work, Dexter is searching Boyd Fowler’s arrest record to see if he had any help, but there’s no evidence of that as far as he can see. Since Lumen told him that Fowler had help and that there were others, Dexter has set his mind to finding and stopping the other men. Batista and Deb continue working together and try to find out what the tattoo means. They ask Masuka – who has an extensive tattoo on his back – for help.

Dexter leaves work to investigate Boyd’s house in another attempt to find something about his accomplices. He sees that someone else has already broken in before him; he finds blood on a smashed window and notices that they went through his files. He thinks this was the accomplice trying to cover his tracks and lifts a fingerprint. It turns out to be Lumen’s. He goes to her hotel room and finds one wall completely covered in notes, maps and newspaper clippings. She and Dexter both have the same mission: find the other men responsible for this. He finds a note in her room that she took from Fowler’s house. It’s from Fowler’s ex-bunkmate, Robert Brunner. Harry warns him that Lumen is going to bring him down.

Dexter and Lumen meet for breakfast again and he asks her about her search for the men. He tells her to stop before it’s too late, but she gets up and leaves again. He knows she’s going to try to find Brunner, so he realizes he needs to find him first.

At the station, Batista asks about Quinn’s time off, but LaGuerta lies and says it’s not her call. He also asks if there’s anything he needs to know about his case, and if there’s anything he needs to know about anything else, and she brushes him off and says she has to go. She says she might be late, and he grows very curious as to why. Dexter gets some information about Brunner, and he knows that he has to go find him under the bridge.

Dexter puts on a plaid shirt and a hat to blend in and heads to the bridge that night. He finds Brunner and strikes up a conversation with him, and gains his trust by pretending to be just like him. After a few minutes, he takes the needle out and sedates Brunner. He brings him to the kill room he set up for Boyd, but Harry warns him to think about what he’s doing. Dexter thinks, and then realizes that Brunner is wearing an ankle bracelet, so he’s not the right guy. Dexter is angry at himself for being so ready to kill him. ‘Harry’s right. I have to convince Lumen to do what I never could – to move on,’ he tells himself. He goes home and there’s an awkward moment when he finds Quinn there with Deb. As Quinn is leaving, he notices the gloves in Dexter’s back pocket and says “kind of warm for gloves.” Dexter asks his sister if she and Quinn are dating, and she tells him that their relationship is purely physical.