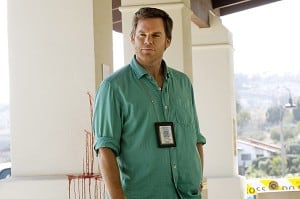 Well…that was kind of lame. If I had come up with a wish list of things I wanted to see in this final season of Dexter, I’m pretty positive Deb possibly having yet another office romance or Dexter taking on a young, whiny protÃ©gÃ© that he wishes to teach The Code to would not have even cracked the top 50. However, that’s what most of “A Little Reflection” was filled with: moments that I didn’t care enough to invest myself in or twists that I just didn’t buy into at all. Even the episode’s final moments, where the beautiful and deadly Hannah McKay returns, slipping something into Deb and Dexter’s drinks to knock them out, falls flat; while I’m very excited to see what crazy drama Hannah can bring to the back half of Dexter‘s final season, her introduction here was exactly like the rest of tonight’s episode: merely average.

The first of the two main storylines from last night’s episode of Dexter consisted of Dexter tracking young Zach Hamilton, as the teenager planned his next kill, before he eventually grew to understand and empathize with Zach’s demons, agreeing to teach him rather than kill him. While the concept of Dexter taking on an apprentice of sorts is quite interesting and could be, with the right character and actor, some awesome dramatic ground to explore, everything about the Zach Hamilton plot felt too telegraphed, and the actor playing Hamilton could not carry the weight of this storyline for me. As soon as Vogel suggested teaching Zach Harry’s Code, I knew that we were going to be heading down this road, as Dexter’s continued desire for connection again manifests itself in him believing that he will be able to bond with another killer. However, compared to the other story threads of this season (Dexter and Deb’s rebuilding relationship, the return of Hannah McKay, and the eventual certainty that someone else has to finally catch Dexter by the end of the series) , this plot detour feels unnecessary and unimportant to the rest of the show. Hopefully, we can burn through this storyline within the next week and get back to the more interesting parts of Dexter, and when I say that, I shockingly don’t mean the race for sergeant (thank God that dull crap is over for the most part).

The other main plot of “A Little Reflection” involved Deb and her boss (whose name I’m going to have to eventually remember) pulling off a sting on his sister’s boyfriend in order to see if he was cheating. Deb ends up putting on a hot outfit (and Jennifer Carpenter did look fantastic last night, by the way), wearing a wire, and flirting with the guy, seeing if he’ll make a pass. When he asks to take her up to his suite and starts getting a little handsy, Deb’s boss comes charging, punching him right in the face, claiming that he didn’t like what he saw him doing to her, and making Deb, of course, come to the conclusion that her boss has feelings for her. I really hope Dexter does more with both Deb and her boss than just throw them into another stereotypical romantic storyline, which filled up way too much of Deb’s screen time in past seasons. Deb is a good enough character and Jennifer Carpenter a more than capable actress that she should not be trapped in a storyline as conventional and uninteresting as that for the series’ final string of episodes.

Moving forward, I’m really excited to see what Hannah McKay has up her sleeves for Dexter and Deb next week and if any of those feelings that Dexter had from last season will resurface. With this final season being so focused on what it means for Dexter to really connect with someone and if he even possesses t 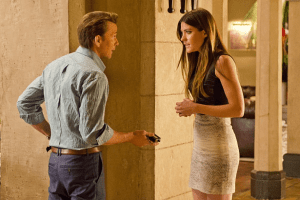 he capabilities to fully, unselfishly do so, it would be great to see Dr. Vogel try and make sense of Dexter and Hannah’s relationship. Do they connect simply because they are both killers, or is there something more there? What allowed Dexter to fall for Hannah last season, and how could that, or his love for Deb, not be considered selfless love? What does love really mean to a psychopath? With only six episodes left in its run, these are the types of issues and questions that I hope Dexter explores, focusing on the internal struggles that its title character has always faced rather than the numerous outside distractions that surround him.

– Miami Metro update: Batista gave Miller the sergeant job over Quinn, which made both Quinn and Jamie upset; Quinn spent sometime with Dexter and continued questioning Deb’s behavior but still isn’t putting two and two together; and Masuka offended his daughter by telling her he got a background check on her and offering her money to help pay for her loans.

– My favorite scene from tonight, by far, was the steak and beer night between Dexter and Deb. The tension-filled air of the scene and all the history that was expressed by them in such few words was just perfect. Also, awesome shot of the picture of the younger, happier versions of the two of them that sits on Dexter’s desk. So much has changed, for the better and worse, with them over the past seven and a half seasons, and I almost forget how simple their interactions were back in season one.