Home
Television
Dexter
Dexter 8.08 “Are We There Yet?” Review: The Brainless Boy Wonder 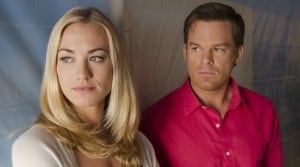 er. You used to be one of my favorite shows on television, and now, sadly, in this final season, the writers keep giving me a glimmer of hope one week and then are disappointing me the next. “Are We There Yet?” had an off-feeling from the start, when Dexter spent over a minute of his opening voice-over telling us how he thought Zach had killed Cassie (something we already knew from last week), but the episode just got simply worse as it went along, aside from an ending that, while somewhat predictable, has me a little intrigued.

While I praised the Dexter and Hannah scenes last week, as I found a renewed, vibrant chemistry between Michael C. Hall and Yvonne Strahovski, I cannot say the same for their scenes shared in last night’s episode of Dexter. For the most part, their characters were stifled with stale dialogue (seriously, the conversation about how the blood stain on the yacht floor made Hannah think of Dexter caused me to cringe), but the pauses between their banter and longing looks seemed a little awkward and fell flat for me as well. However, I will give both Hall and Strahovski credit for the scene before their love scene and the love scene itself. In those moments, I did see and feel the spark between Dexter and Hannah; I’m just not sure whether that “spark” warranted the episode’s final scene being Dexter asking Hannah to stay in Miami instead of ending on a more dramatic cliffhanger.

While the connection between Dexter and Hannah was the focal point of “Are We There Yet?” the most interesting part of the episode is that the Brain Surgeon is still out there and that he or she murdered Zach. This was the best part of last night’s Dexter for two reasons. First, it rids us of the awful character of Zach Hamilton, who with his “Dude…” comments and rookie killing mistakes almost had me wishing Junior from Under the Dome would show up and take his place. Second, and more importantly, having the Brain Surgeon reappear and murder Zach places the focus back on Dr. Vogel and her involvement with these murders (she has to be involved, right?). While the introduction of Zach and the return of Hannah have pushed Vogel into the background these past couple of weeks, her prominence earlier this season and her connection to Dexter‘s roots with Harry’s Code ensure that she has to play a large part in the series’ endgame. More than likely, she will be part of some villainous plot against Dexter; otherwise, what is the point of having her taking up so much screen time?

Finally, we turn to Deb. Predictably, Deb now wants to rejoin the police force, where she can be the one competent member of the ever increasingly incompetent and always annoying Miami Metro, while Elway does his best to find and arrest Hannah, before he ends up in Dexter’s sights. If there’s one thing that has ticked me off the most during this final season of Dexter, it has been the show’s treatment of Deb and the Dexter and Deb relationship. While so much time and consideration was given to both the character of Deb and her relationship with her brother throughout the first three excellent episodes of this final season, it’s like the show magically forgot that there was ever any conflict with Deb or between her and Dexter, after she tried to kill both herself and him by driving off the bridge. As a writer, if you have an interesting and palpable relationship between two solid characters played by two fantastic actors, how do you abandon the dramatic possibility of that storyline for meaningless nonsense about whether Quinn and Jamie are going to break up this wee 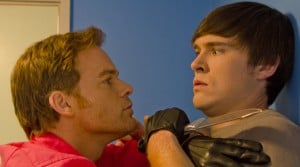 k or how Masuka’s daughter is fitting in as an intern at Miami Metro?

By fluffing up its final episodes with useless characters and meaningless, dead-end plots, Dexter lacks any sense of urgency or finality. With only four episodes to go, I’m not sure what direction the show wants to go in at all, and I feel increasingly worried with each passing episode that the series will not be able to pull off a satisfying conclusion. “Are We There Yet?” was the title of last night’s episode, but it very well could be the question that any Dexter fan is asking him or herself. Are we finally there yet? Are we finally at a place in this season where things will pick up, where the dramatic stakes will rise? And, sadly, the answer after tonight’s episode would be a resounding “no.”

– Miami Metro Update: Masuka’s daughter quit the topless sports bar and now works as an intern in the lab at the police station, Jamie and Quinn got into yet another fight about Deb, and Angel is still Angel.

– Along with the flat, awkward dialogue in a lot of the scenes tonight, there were also some very weird editing choices. Prime example: Vogel tells Dexter that if he doesn’t invite Hannah in for dinner that she will. Instead of cutting to the scene of the four of them eating inside Vogel’s house, Dexter instead had us follow Dexter down to the car and awkwardly have him ask Hannah and then walk her back up to meet Vogel. It all felt extremely clunky.

– Funniest part of this episode: Harrison yelling “My name is Harrison!” at Quinn after he keeps calling him “The Kid.” I don’t know exactly why, but I was laughing for a solid minute after that.

What did everyone else think about last night’s episode of Dexter?