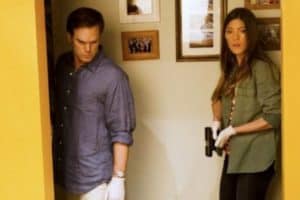 Last night, for the second straight week in a row, Dexter disappointed me during its final season. After three stellar episodes that kicked off season eight, Dexter has gone into a bit of a tailspin with its past two installments, spending too much time on plots that no one cares about (Masuka and his daughter were on my screen for way too long tonight, and I’m sorry but when did the female detective on Miami Metro, whose name still escapes me, become an important part of this cast of characters? Who at all cares about the sergeant competition between her and Quinn?). I’m not trying to be too hard on Dexter. I know every season has its dud episodes; season seven may have been my favorite Dexter season to date, but you will never find me defending the awfulness that was the episode where Hannah’s dad came back and Dexter was forced to kill him. What I’m trying to say is that when you only have seven episodes now left in the run of your entire series, there needs to be a sense of drama and urgency, and the more time Dexter spends with the supporting characters of Miami Metro, the harder it makes it for me to find the show compelling.

While I did have major issues with how this episode spent its time, the main positive that I was glad to see was that Dexter and Deb have finally been put back together in some sort of capacity. In “This Little Piggy,” they are on the hunt for Yates, who has kidnapped Vogel and may be hiding out at one of 19 different addresses. Even though I’m not as emotionally invested in Vogel as a character as Dexter and Deb are on the show, I did find their search for her entertaining to watch, as we got to see the brother-sister duo team up again and use their skills to track Yates down.

However, the only development here that I find difficult to swallow is Dexter and Deb’s immediate reconciliation with one another without any proper discussion of the events that have caused them to reach this breaking point. I know some fans may be tired of the back-and-forth conversations between Dexter and Deb about their feelings, how they both need each other in their lives and how hurt the other one has made him or her feel. Yet, if I am to believe that Dexter and Deb have actually found some peace in their struggling relationship, some common ground again (a place where Deb can be content with Dexter murdering right in front of her eyes, and where he can be open enough to let both her and Vogel on to his boat while dumping the body, telling them “I wanted to be with family”), then I need to see them fully work out these major issues that they share with one another instead of simply sweeping them under the rug.

Essentially, what I’m trying to say is that I hope this episode only acts as the starting point to a new, still challenging phase for both Dexter and Deb. I  want to see the remaining episodes of Dexter‘s final season really answer the question of what these two are truly willing to do for another and ramp up the emotional turmoil between these two, strange, traumatized, and co-dependent siblings. I mean, hey, that’s gotta be better than watching Masuka awkwardly laugh as he tries to figure out if his daughter is attempting to steal money from him, right? 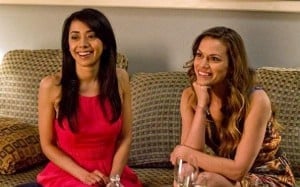 – Just like last week’s episode, I did not buy the actor who was playing Yates as threatening at all. His “mommy issues” scenes with Vogel fell completely flat for the most part, which was mainly due to the writing and that actor’s performance, since Charlotte Rampling has been knocking it out of the part for most of this season.

– So if Dexter starts up anything at all with Jamie’s friend, played by the lovely Bethany Joy Lenz, she’s definitely dead when Hannah comes back. That’s just a given, right?

– Dexter’s killing of Yates was one his best kills in recent memory. A bed post, through the mattress and into the chest. Bravo Dexter writers for that one.

– Michael C. Hall’s delivery of the line “Great news, Vince!’ after hearing that Masuka was a father was priceless. Sometimes I think I may miss Dexter‘s comedic scenes more than its dramatic ones when it goes off the air.

What did everyone else think of last night’s episode of Dexter?