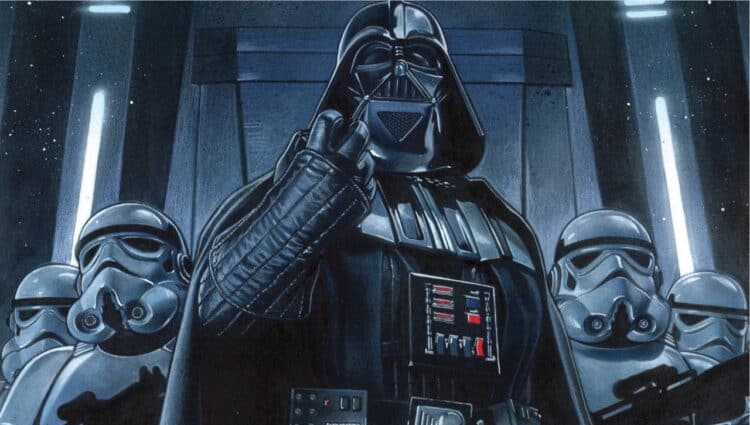 Darth Vader is an imposing figure, that much is fairly obvious to fans and to those that might not know that much about him, but there are times when he’s been pushed to his limits by characters that are either very powerful or more than capable of outwitting him in one way or another. After all, even with the Force, he’s not perfect, and there are certain vulnerabilities that he still possesses that can be exploited. But in a fight between the Predator and Vader, it feels as though the Sith Lord would still walk out victorious more often than not. There are reasons for this to be certain, but there are always many different ways to look at a proposed battle as well. The Predator is a creature that relies heavily on stealth, the various weapons it carries, and its own size and strength. When taken one-on-one it’s been seen that the alien can be defeated, but a hunting party might be a different story. In a one-on-one deathmatch though it’s fair to say that the environment might make a slight difference in the battle, while other factors might need to be taken into consideration of well.

Just looking at the Predator it can be seen that their size is imposing to most individuals since the smallest of them still stand as tall as a tall human being. Their strength is impressive as well since the alien from the first movie was able to hoist Dutch up by the throat with one hand and hold him there for a few seconds. Plus, their durability is enough to keep them from being harmed by regular punches or hand-to-hand combat from weaker individuals, but they’re not immune to stabbing, slashing, and piercing damage. That means that a lightsaber would carve up a Predator quite easily. But one has to remember that unless they have to close the distance, these aliens have plenty of long-distance weaponry that is more than a little devastating.

Their nets for instance can wrap up a target and anchor themselves to a nearby surface or object before tightening automatically, thereby cutting the ensnared prey to ribbons. Then there are the shoulder-mounted cannons that have taken down several characters throughout the years. The chakram that some of them carry can cut through multiple targets and have the ability to return to the thrower, and a few of the Predators have been seen as capable of firing their wrist blades from a distance as well. Those weapons alone are enough to give many individuals pause, since this can be done well out of reach, and can be utilized when the Predator is in stealth mode. Getting to the handheld weapons that require the Predator to be up close would be where things might turn ugly. But the truth is that Vader would make it difficult at any distance since while his weaponry isn’t as diverse, his two main weapons against the Predator kind of trump anything the alien can come up with. Between the Force and a lightsaber, Vader is set to stomp the Predator into the ground, and there’s a good reason.

Vader’s mastery of the Force is great enough that he would be able to sense the Predator coming since the hunter isn’t exactly schooled in keeping its desires at bay when it comes to stalking its prey. The hunger for bloodshed is something that Vader knows very well, and being able to sense this before the Predator struck would be vital. Plus, Vader’s reaction time is insanely quick thanks to the Force and his own training, so the net, the chakram, and even the shoulder cannon wouldn’t be enough, since Vader would slice through, block, use the Force to defeat such attacks. This is where environment would come into play since it is possible that if Vader and the Predator met on a planet steeped in the dark side, or with so many confusing sensations, that the Sith Lord might be disoriented just enough to miss the Predator sneaking up on him. But once again, the Force would be the great equalizer to the Predator’s stealth attack, and once it came down to hand-to-hand combat, Vader doesn’t just have the Force, he’s also a master duelist as well.

There’s no real way to determine if the metal the Predators use would give way to a lightsaber. Even if it gives way to acid, that’s not quite as definitive, and it’s possible that the Predator could duel with Vader for a little bit. But in the end, the alien would be defeated and Vader, who has taken on all types of opponents, would walk away victorious. Against an entire hunting troupe of Predators, Vader might falter since it’s been seen that a hunting group can be extremely well-coordinated. But there’s still a good chance that Vader would manage to escape, or annihilate all of them.