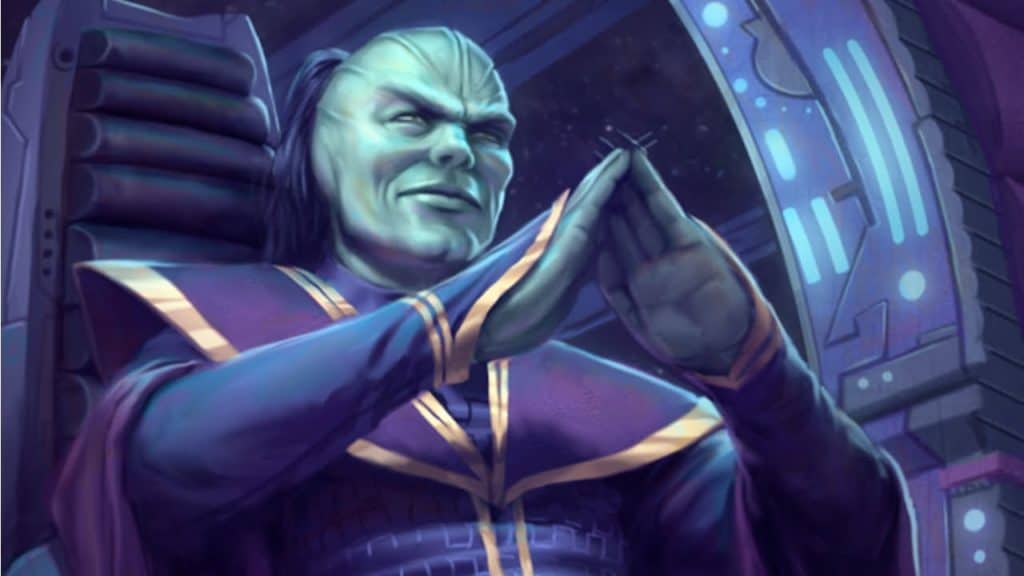 It’s very likely that a lot of people who don’t know the Expanded Universe canon would ask who Prince Xizor is since the guy has appeared in comics and in novels, as well as games, but otherwise, he’s kind of a mystery when it comes to the movies. The long and short of it is that he’s a member of royalty from the planet Falleen and is a type of reptilian humanoid that can use pheromones to manipulate and seduce people into doing what he wants them to do. As some would say, this idea hasn’t aged well since in this hypersensitive era his former infatuation with Princess Leia led to Xizor trying to seduce her when she came to confront him about the attempt on her brother’s life by Black Sun, the organization that Xizor worked for and ended up running after a while. As a person of great ambition and with a cruel streak a mile wide, Xizor was the type of character that one couldn’t help but love to hate since he did whatever he could to stick close to Emperor Palpatine, which irked Darth Vader to no end.

The reason why Xizor stayed so close to Palpatine however was to further his ends, but his supposed rivalry with Vader had a much darker origin. After the Empire was formed, a chemical plant that was located on Xizor’s planet accidentally lost track of a deadly creation that could have caused a widespread issue. Darth Vader took the initiative and had the entire area razed with cannon fire. The only problem is that Xizor’s entire family was caught in the blast, which was something he hadn’t anticipated. From that point on he started plotting revenge against Vader for the act of taking his entire family, but his revenge never came about since Xizor didn’t make it past the Shadows of the Empire novel.

As intelligent, capable, and wealthy as he was, Xizor wasn’t always the best planner, even if his ego allowed him to believe he truly was that great. Vader wasn’t exactly ahead of him, but he was still far beyond him since he had more than the ear of the emperor, he was the emperor’s enforcer. That meant that he had a great deal of authority where Xizor had authority over his own interests and Black Sun but was trumped by the Empire even if it wasn’t always believed to be so. During Shadows of the Empire, Xizor was attempting to go after Luke and at one point, Vader caught wind of this. He ordered the craft that Xizor was in to be destroyed after Xizor wouldn’t listen to him. There was a rumor that the prince had somehow survived the blast or had escaped before the destruction of his craft. But that rumor was apparently debunked a while back, meaning that Xizor was dead and gone. But to be bringing him back now is kind of interesting since when Disney bought out Lucasfilm they made it clear that they wouldn’t be using the EU canon, apart from the elements that the Mouse House finds useful. In other words, they’re content to cherry-pick like always.

If Xizor’s appearance were to be accurate, he would have shown up after the Battle of Hoth, since this is where his story rests. But considering that he hasn’t been seen in this new canon yet, it might not be too hard to fit him and make him adjust to the galaxy as it is. For a character such as Xizor, this might actually be kind of easy, since taking over a criminal organization, gaining the ear of those that are in command, and seeking to dominate others would be fairly easy depending on where he might be injected into the current canon. He wouldn’t exactly be a favorite of the Rebels or Resistance, but it does feel that he might be able to work with whatever ruling or criminal element that is leftover from the previous trilogy. There’s always going to be power to be snagged for those that are ambitious enough. But if they manage to fit him in closer to where he was actually prominent in the Legends canon it would be rather interesting to see.

There are quite a few interesting characters that belong to the Legends canon that we haven’t seen yet, which kind of begs the question of when we’re going to see the Mouse House wake up a bit and realize that they gave up on something that could have helped them out in a big way. The universe is still big enough to introduce someone like Xizor, so it will be interesting to see how he’ll be introduced and what kind of arc he’ll be given. There are more villains to explore, but Xizor is one that a lot of fans have been wanting to see for a while.