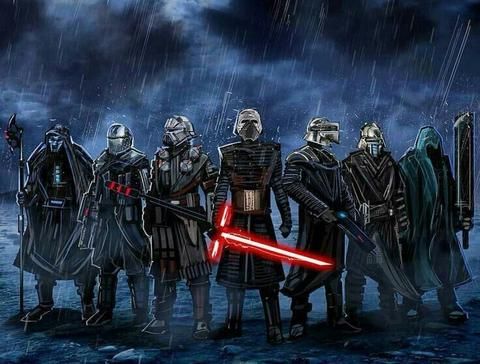 This question feels a little bit ridiculous to be certain since after watching Ben Solo annihilate the Knights of Ren in Rise of Skywalker, it feels kind of obvious that Darth Vader would destroy them with barely a thought. Over the course of the most recent Star Wars trilogy, it was seen that the group of dark side Force-users was built up in ways that made them appear to be quite formidable, but one has to take into account why this was the case. While they might have use of the Force, and they did, along with Kylo Ren, burn down Luke Skywalker’s Jedi Academy, their group tactics and the fact that they were up against students, not fully-fledged Jedi, kind of indicates that they might fold when faced with an individual that could wield the Force with a moderate to serious amount of skill. The fact that they fell to Ben Solo is extremely telling since it would appear that for all their ferocity and skill, they’re nowhere near as deadly as a Jedi or even someone that didn’t have the full benefit of Jedi training.

But as the comics are about to show, Qi’ra from the Solo story is about to start summoning a certain type of havoc as she sends the Knights of Ren to Mustafar to steal something from Darth Vader’s fortress. That mere sentence should be enough to make a lot of people think that Qi’ra is playing the kind of fire that she doesn’t fully understand yet. Even after working with Darth Maul, it feels fair to say that she has no idea how bad of a mistake it is to mess with Vader in any way. But seeing as how the Knights of Ren can use the Force and are thought to be a worthwhile group to use when dealing with other Force-users, one could possibly see how Qi’ra might mistake this as a good idea.

From the preview, it looks as though the Knights will be infiltrating Vader’s fortress in a manner that is as close to a smash and grab as it can be since it would appear that they have little more than disdain for pretty much anyone. But thinking that Vader’s fortress would be unmanned is kind of ridiculous, not to mention borderline foolish. When one of his servant’s steps into view to tell the Knights that Vader would find out about their trespass, the Knights predictably open fire, and this is where the preview of the story ends. In the comics, TV, and movies, it’s usually seen that those who think themselves stronger than anyone around them tend to be those that end up being knocked down the hardest. The fact that it took the entire group of Knights to divert the lava flow that hid the entrance into Vader’s fortress is kind of comical really since one can imagine that Vader can do this on his own. In all fairness, attacking the fortress is wise when Vader is gone, since if he was in attendance then the Knights wouldn’t stand a chance unless they had enough tricks up their sleeves to keep the Sith Lord busy for a while.

Even then, Vader has been seen to annihilate enemies that come prepared, as his mastery over the Force is great enough that he doesn’t exactly fear anyone whose power is less than what he wields. Qi’ra’s attempt to unseat Vader and the Emperor by eliminating them in one way or another isn’t exactly original since others have had the same thought. But with an army of assassins and other violent beings at her disposal, it does feel as though she would be able to challenge the power structure of the Empire through one method or another. Of course, that’s if she’s being smart and not trying to be too obvious about what she’s doing. One can only imagine that the moment Vader and Palpatine realized who was attacking them that they would end up turning their gaze on that unfortunate soul before hammering them hard enough to erase said individual from existence. In other words, Qi’ra is an intelligent and cunning individual, but sending the Knights of Ren into Vader’s stronghold is kind of like tossing a bunch of agitated guinea pigs into a snake pit.

Obviously, the Knights will survive, but it’s likely because they either run or refuse to stand up to Vader if he does show up. It might even be that Vader wouldn’t think much of the Knights unless they took something that he prized, or dared to desecrate his fortress in some way. Unless the continuity is going to be stretched even further, the Knights will survive, but this likely means they won’t be tangling with Vader in a stand-up fight and will be running away at some point.