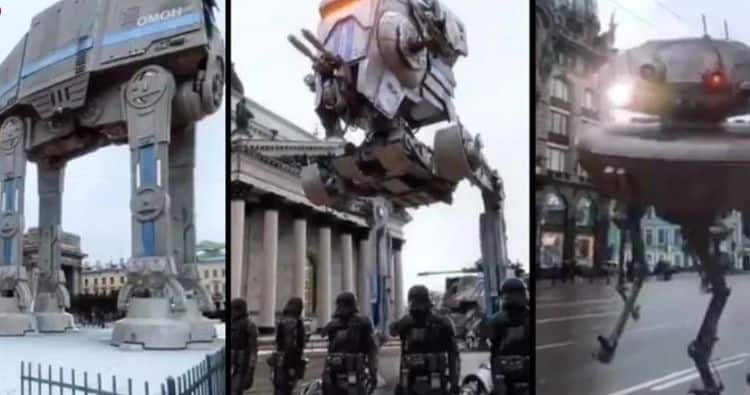 Just imagine if the Star Wars universe, or parts of it, turned out to be real eventually and stuff like this was seen on the streets in an attempt to execute martial law. Some might say that we’ve headed that way anyway, but the Star Wars fan that posted this has a pretty good sense of humor, not to mention the editing skills that are necessary to make this happen. Thankfully there’s no such system as the Galactic Empire getting ready to put the hammer down on this planet. Otherwise, things might get a lot worse in a very short time. Mark Hamill apparently had to chime in on this effort, which makes sense considering that he had to act in the type of movies that made this kind of imagery possible. It really depends on who a person asks as to whether or not something like this might actually happen, but one can at least wager a guess at what just one AT-AT or AT-ST would cost, let alone a fleet of them. That’s not to mention the stormtrooper armor, weaponry, and droids that would probably be desired as well. Each piece of tech probably wouldn’t cost that much to make as far as materials go, but the billions of dollars (that’s moderate to low on the cost scale) that would be needed would certainly bankrupt a couple of countries in the process of creating and then stationing the vehicles where they needed to be.

I'd probably watch the news more often if they went to the trouble to add special effects. https://t.co/vAgRdAAW4g

But even while trying to deny that we’re headed in such a direction, a lot of people are worried that it might happen one of these days, that the continued unrest in the world, in the US, as most of us are concerned with, might grow to be too much, and we’ll find martial law being imposed. It doesn’t feel like the most valid fear in the world, but the one thing that can be said is that if it did come, it wouldn’t look like this, since those days are far and away from our current timeline since our current AI need to be programmed to wander about on their own, and US troops aren’t being decked out in black armor just yet. This is a good bit of editing though since it does look realistic and it does feel likely to strike fear into those that might not be able to tell fact from fiction if they were to see it. As far as being a good laugh it’s definitely worth a chuckle. Anyone looking at stuff like this as being prophetic in any way needs to remember that the only real future-based movies that have really come true are those that are inherently positive, such as Back to the Future II, as in when the Cubs won the World Series.

Stuff like this that’s meant to inspire fear in others in some way, but is actually just a well thought out video, never appear to come out as people think it will. Remember Escape from New York, or Escape from LA? Those were some of the most extreme examples of the future, and they never came true. This is just something done for fun that can entertain a lot of people that happen to like Star Wars, and those that might not like it but still can’t help but be impressed. In the world as it exists today having fun is something that a lot of people might agree is an important part of life since it keeps us from falling apart over every little thing that comes along. After all, if we were to be depressed by this image it would mean that we’ve lost our sense of humor entirely and are taking everything WAY too seriously. There are some folks that appear to have that issue and might need to be reminded that there are still plenty of ways to simply enjoy life and find pleasure where we can, but it’s thankful that a lot of people are still able to see the importance in just having fun with something and being able to showcase it in a manner that might spread a bit of social commentary while allowing people to enjoy their favorite parts of pop culture at the same time.

The whole idea of government in Star Wars anyway is usually seen as chaotic to absolutely tyrannical, since the New Republic, as benevolent as it was meant to appear, was a bundle of chaos just barely being held in place by the checks and balances that it tried to maintain. From Episode 1 to 3 in Star Wars it was clear why the Republic was failing, as it wasn’t able to meet the demands of its many people. The Empire wasn’t a worthwhile replacement obviously, but a happy medium between the two didn’t appear to be the desire of the people.