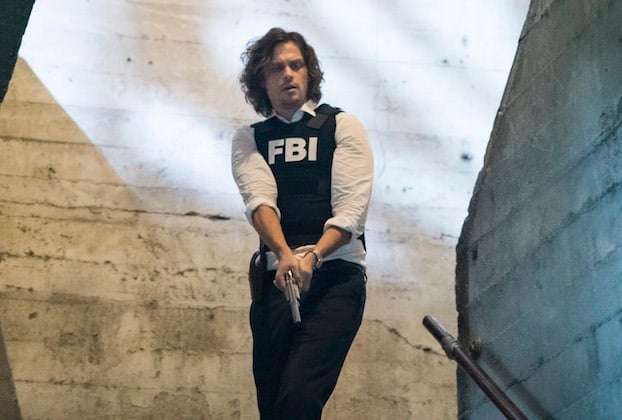 Season 12 of the hit crime-solving psychological drama series, Criminal Minds, ended with a spectacular car crash caused by the creepy bad guy and serial killer, Scratch. Via the use of spike-strips, he is solely responsible for the BAU’s SUVs spinning out and then he runs into them with an eighteen-wheeler. In the Criminal Minds Season 13 Premiere, the accident results in the death of the new guy, Agent Stephen Walker, and the abduction of Emily Prentiss. Rossi, JJ, and Tara sustain some injuries and are taken to the hospital but Luke is uninjured. And, here are the top five moments from the Criminal Minds Season 13 Premiere:

It soon becomes clear that Scratch’s goal is to get Prentiss to disclose to him where Hotch is. He’s now in WITSEC and has been ever since he left the BAU. Scratch will resort to all kinds of dirty tricks to get what he wants and that includes drugging Prentiss so that she sees exactly what he wants her to. She sees horrific damage to her legs from the accident complete with imaginary pain, as well as Scratch’s assistant who also doesn’t exist.

Back at the BAU, Reid is suffering from a serious case of PTSS, which is the new name for PTSD because it’s now been determined in the medical field that it is actually a syndrome, not a disorder. He’s concerned about it because his usually brilliant brain is running a bit slower than it should, which could endanger Prentiss’ life. However, in spite of it, he figures out the key to the case, as he usually does.

3. Goodbye and Good Riddance to Scratch

Prentiss finally figures out that things are definitely not what they seem and she escapes by pretending she’s still incapacitated and that she’s going to tell Scratch what he wants to hear. As he bends close so she can whisper Hotch’s whereabouts in his ear, she takes a big bite out of it instead. About that time, the BAU members storm the warehouse where she’s been held and chase after Scratch. Luke chases him to the rooftop and, when he tries to take the fire escape, he ends up falling over the edge and hanging onto the ledge. He begs Luke to pull him up, but while Luke is considering it and holstering his gun, Scratch loses his grip and plunges to his death on the pavement below.

4. Happily Ever After for Hotch and Jack

After Walker’s funeral, the team joins up again back at the BAU, where Prentiss informs them that, now that Scratch had been successfully dispatched, Hotch and his boy Jack were able to check out of WITSEC to resume their happy lives together. Hotch will not be rejoining the team, however, so this all seems to wrap up the Hotch story once and for all.

One of my favorite lines on the show has always been Hotch saying “Wheels up in 5” and Prentiss relates how the saying had kept her going when she thought she couldn’t go on during the Scratch torture sessions. So, the BAU’s new mantra became “Wheels Up”. And, a fitting one it is indeed. So, we’ll all be waiting for wheels up on the next episode and the rest of this season of the amazing Criminal Minds.