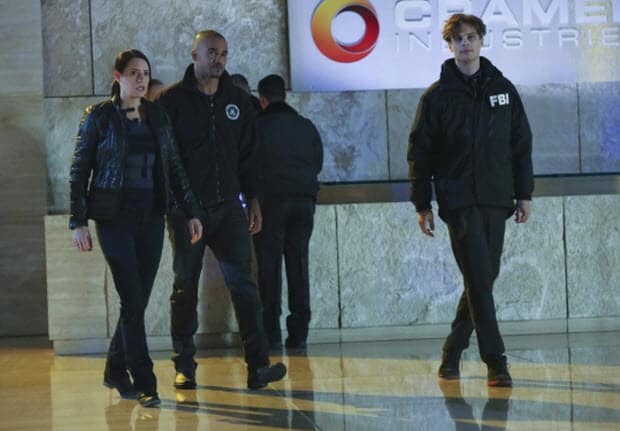 Finally, the episode every Criminal Minds fan has been waiting for has arrived! The big milestone 200th episode brought back our beloved Emily Prentiss (even if just for one night), saw our girl JJ in some pretty serious danger and, even if it wasn’t as scary or suspenseful as Criminal Minds can be, the ep definitely brought out All. The. Feels.

We left off two weeks ago with a cliffhanger ending – JJ was abducted by a gloved man while on the phone, trying to get ahold of Cruz. It’s revealed that Cruz has also been taken by the same people who took JJ and we know that the two had worked together in 2010 on a secret mission, which is why they had to act like they didn’t know one another prior to him joining the team.

It all unfolds as the story goes back and forth, switching from the present to flashbacks from the 2010-2011 mission – in Afghanistan! JJ’s there, Erin Strauss (may she R.I.P.) is there too, and Cruz obviously. They’re all there to assist with the Bin Laden takedown – and they’re not alone. Rounding out the crew are two men we have our eye on – and NOT because they are particularly good-looking either: Hastings, a fellow American who right off the bat gives JJ a hard time for, well, being JJ; and Askari, a cruel looking man who simply reeks of bad news. JJ makes herself a target for potential unsubs after uncovering the fact that there was a double agent in their midst in Afghanistan – and for a second we’re led to believe it’s her pal Cruz. (It’s not.)

Secrets are a big component in this episode, ranging from the little things (blackbird, anyone?) to the big (JJ had a miscarriage) to the even bigger (Hastings is the unsub, even though he was supposedly killed by Askari). One great scene from the episode that encompasses the overall ‘secrets’ pattern was a flashback between JJ and Prentiss wherein JJ confided that she suspected there was a traitor double agent in Afghanistan. The two had a moment about having Blackbird as a tattoo for Prentiss, a notable inside exchange that eventually cracked the code as to where JJ was being held captive. Such a heartwarming moment between the two friends – and heartWRENCHING because we know Prentiss isn’t permanently back with the BAU.

Speaking of Prentiss, the moment when the team gets to rescue JJ and Prentiss enters the room, JJ kept repeating, “I knew you would come, I knew they would call you.” We did too, JJ! We did too!!
Other thoughts on the episode:

– First of all, when the team found out the location where JJ was held and they all had a shoot-out inside the facility, my first thought was, “Oh heyyyy, Reid with a gun!”

– I wasn’t too thrilled about the storyline. There, I said it. It all seemed fairly predictable and I feel like some of the previous serial killer storylines were a lot more engaging and suspenseful. You know, the kind of suspense that when it cuts to commercial you’re almost ready to chuck something at the screen for two reasons: 1) How dare they spring that surprise on you only to divert your attention to a Coca-Cola ad and you can’t even react fast enough; and 2) Hurry up with the commercials and let’s find out more information. it’s getting GOOD!

– When the team asked Prentiss how much longer they had with her until she left and she replied, “6 hours,” who else yelled at their TV, crying, “NO! STAY LONGER PRENTISS!” Anyone? Just me??