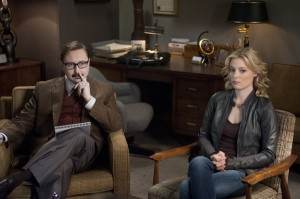 How thick are the friendship bonds of the Greendale Seven? Well, two months have passed since their infamous expulsion and it seems that not much has changed. Sure, Troy has apparent cooking skills, Britta has ‘Britta’d’her hiatus by drinking too much and Pierce is still being a bother, but the group is still hanging around together in Trobed and Annie’s apartment and spending time together. So it’s only natural that their bonding time would be interrupted by Abed (dressed in his full Inspector Spacetime gear) getting arrested.

Apparently Abed has been caught trespassing on Greendale property, and as he is an expelled student, this doesn’t exactly fly with security. In danger of being sent to jail, Abed is forced to go to therapy with Dr. Heidi (guest star John Hodgman, of ‘The Daily Show’and ‘I’m a PC’fame. Fun fact! This was apparently the role that Nathan Fillion was hoping to play, but the schedule for filming conflicted with his Castle commitments so he ended up not being able to be involved. Use your imagination, kids.) The rest of the study group accompanies him, since apparently Abed isn’t allowed to go to the doctor by himself (that’s what happens when you try to remove your own tongue.)

Troy tries to explain how Abed is normally weird — he’s just creepy weird now after having been expelled (makes perfect sense to someone who doesn’t understand the study group, right?) Abed defends himself and says he’s not crazy, and I can’t think of what this poor therapist must be thinking. I mean, it’s bad enough he has the misfortune of being seated next to psychology major Britta, who insists on ‘helping out’by interjecting her own knowledge. Imagine having to treat the entire study group at once? 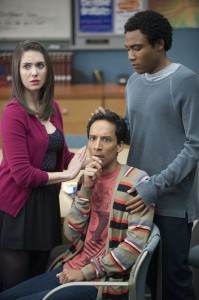 Dr. Heidi asks the group how long Abed has had his bouts of ‘crazy’behavior and the response is the group describing a montage of Abed’s more interesting moments — telling Shirley she’s randomly a bad person, freaking out over strange changes, filming Annie sleeping, narrating Pierce as he eats his lunch. Britta defends Abed when Dr. Heidi announces that he thinks Abed is sick, declaring that no one in this room gets to define that. Score one, Britta. I actually think you’re onto something here.

Jeff jumps in to defend Abed, saying that his friend’s sanity is not to be judged – after all, it’s been a strange year for all of them. Cue another montage of everyone having a ‘weird’moment during the year — Annie playing Troy and Abed in the Morning, Troy buying a motorcycle, Britta experimenting with her hippie side, Jeff and Annie dressing up. ‘What you call sanity, we call clarity,’says Britta, which may how I’m describing the show from now one when anyone asks why I love it so much. Dr. Heidi isn’t buying it, however, and tells the group he thinks Abed should be committed. As in, put into a mental institution committed.

Troy breaks down at the prospect of possibly losing his best friend while Dr. Heidi continues to tell them that their obsession with Greendale is unhealthy — so unhealthy that it can lead to bigger and more destructive things. After a montage of shots of Greendale being TOTALLY weird (Advanced Breath Holding classes, homeless people sleeping in the study room), the group retaliates by talking about the good times they’ve had — these memories mostly involving the Dean and how he’s taken care of them at various points (telling them about a school fire, giving them free pizza, singing happy birthday over the loudspeaker.) Jeff starts to realize that they Abed needs to be at school, not in a mental institution, to which Dr. Heidi says (in the most Frankenstein way possible) that there IS no Greendale, because Greendale doesn’t exist. Well, okay, it does. But not as a college, as a mental hospital. 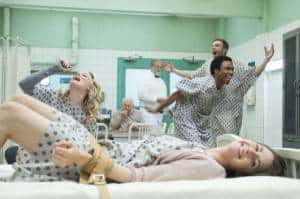 Dr. Heidi goes on to talk about the good memories they’ve had are a shared psychosis. I loved the line where Dr. Heidi basically asked how there could really be a school that focused so much on them specifically, because isn’t that what the show really is? Kudos to Community for making fun of itself, always. Annie calls the therapist out for lying, but Dr. Heidi points out that the reason they all came to Greendale in the first place was because of bad things in their lives, and they needed a place to heal. A hilarious montage follows of the group being entirely crazy in a mental hospital (most interestingly, out of all these crazy antics, Annie and Abed kissing stuck out the most at me.) But the group still doesn’t believe Dr. Heidi’s words, and eventually realizes they’ve been had.

Dr. Heidi breaks down and tells them that the Dean has been kidnapped by Chang and replaced by a double. The group remembers Chang being crazy, though apparently, not THAT crazy. They decide that they need to rescue the Dean, and vow to do so. Because friends stick together, right? Meanwhile, Chang, having taken over the Dean’s office, has realized that his plan to derail the study group hasn’t worked. What’s going to happen next to the Greendale Seven? I think things are about to get a little crazy…

The episode tag is Troy and Abed in the Morning — no, really in the morning. As in, the 3am type of morning, which Jeff angrily and sleepily calls them out on. Ah, Trobed. Never change.

What did you think of tonight’s episode? And how excited are you for Community‘s FOURTH season renewal, just announced tonight? (I know I am jumping for joy!)