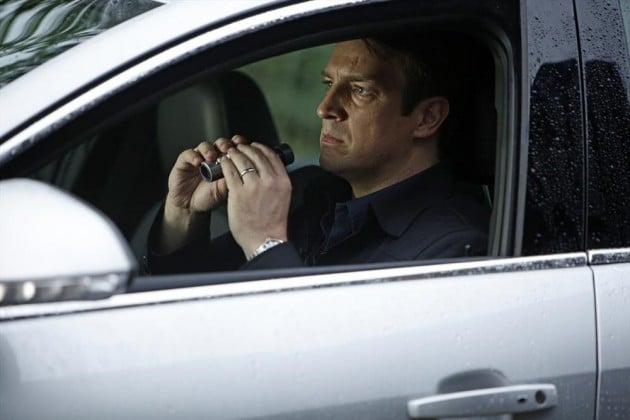 This week’s Castle was a bit of a miss for me. Not because of the PI storyline, but maybe it relied too heavily on a sort of Lifetime movie meets Hitchcock kind of thing. Too many twists and back and forths. The facts were these:

Castle gets a case all on his own, it’s a woman who thinks her husband is cheating on her. Castle doesn’t typically like these kinds of cases, but because he knows Eva Whitfield from high school, he agrees to it anyway. He does the typical snoopy snoop and comes back with evidence, but Eva wants the photos immediately. When he heads up to her place in Westchester, however, things are a bit suspect and soon he hears screams and the sounds of murder! He tries to go after the silhouetted villain, but as Castle takes chase in his car, he loses track of them in the woods. He gets out of his car to look around some more and gets whacked in the head.

The head wound might’ve been a good time for a reference to the 2 months he was away, what with him lost in the woods with no car and all, but not even a little nod. Even though Beckett seems worried, since he’d called her before getting disconnected. Beckett arrives in Westchester and together they talk to local cops who don’t believe him. Why? There’s no clear reason. The local cop seems skeptical because Castle’s PI license is only a month old, but what does that have to do with anything? He’s still been a person with eyes and ears for 40+ years. They all go back to Eva’s house, where her husband, Cole, answers the door, acting with just enough suspicion for Castle to know he did it. Whitfield claims Eva left him a note and left him. Whitfield kicks the team out due to Castle’s antagonist attitude.

Castle stews all night, sad for the death of his former classmate. Whitfield claims he was with his mistress, Taylor, during the time of the murder. Kate talks to her, despite not having any jurisdiction. Taylor is confrontational and a bit cocky. Meanwhile, Castle foolishly stalks Cole at his house, where Cole claims Eva is alive, called him earlier that day and stole 7.4 million dollars from him. But it turns out Cole got a lot of that money from the death of a previous wife….

Esposito tells the team that the call Cole claimed came in that morning really came from a location in Manhattan near Taylor the Mistresses apartment. Ryan and Beckett investigate whether she made the call or not. She claims she didn’t — she was at work that morning. But just as Kate was really laying the consequences of her lying into her, Whitfield’s lawyer comes in and breaks up the interrogation.

Castle suddenly changes his tune, he arrives at the belief that the murder never really happened. “This whole thing, it’s a work of fiction. It’s a Hitchcock movie with me cast as the witness. I’m Jimmy Stewart in Vertigo.” Castle believes Eva is behind the whole thing — she wanted him to drop off the photos that night so that he could be the witness. She didn’t just want out of the marriage, she wanted Cole to suffer. But Kate gets a call from the morgue, they found Eva’s body in the Hudson.

Lanie is taking care of the Eva’s body as Castle and Beckett enter the morgue. It really is Eva. Now that they have a body, they corner both Taylor and Cole, but of course Cole’s ever present lawyer, Ms. Haskins, is ready for combat. But neither Cole nor Haskins seemed to have suspected that the police had found Eva’s remains. And Cole wasn’t with Taylor like he said he was, she gave him up. And Lanie finds hairs in Eva’s nails that transferred during a struggle. All signs point to Cole being the murderer, but when Beckett and the police pull up to his house, he’s found hanging next to the chandelier.

So, while everyone thinks the case is wrapped, with Cole killing himself due to guilt, Castle knows it doesn’t feel right, doesn’t feel complete. Back at his office, Castle has constructed a typical “detective searches for clues” murder board with different color string. Castle now claims that Eva staged the murder, but with an accomplice who then wanted Eva out of the picture. “In classic Hitchcock fashion, her co-conspirator double crossed her.” Castle asks Kate to look into Cole’s business partner, but she warns him that he might just be seeing ghosts due to guilt over his friend’s murder.

The team goes through both of Cole’s business associates, Cole was having a second affair with one of their wives, after all. One of the partners was helping Eva stage the murder, but claims he didn’t kill her. She told him she was having second doubts about the plan, which wasn’t even hers to begin with. When tracing Eva’s last steps, they realize that Haskins, the lawyer, was connected every step of the way. It was her plan to destroy Cole and when Eva felt bad about it and wanted out, she killed her, then killed Cole too. Cole’s 1st wife was a friend of hers, and she’d been trying to get revenge on him ever since.

Even though they solved the case, Castle still feels awful about Eva’s death and his skills as a PI. Kate tells him to hold off before quitting though,

My disinterest in this episode has little to do with the Castle P.I. of it all. I am still okay with this story going forward, especially since it provides us with a little more Castle depth than when we always focus on Beckett’s mysteries. And maybe I just don’t watch a lot of classic detective/film noir fiction, so the references to the tropes are a bit played out for me now. Plus, I am ready to figure out what happened in the two months Castle was missing. I believe next week and the one after return us to that storyline.

– The scene with Castle at Whitfield’s house doesn’t make sense considering the end. Cole says “You’ll never prove a thing” but it turns out he wasn’t involved at all. What was his reasoning for saying such a thing, then? He was truly innocent and had no reason to further antagonize Castle in such a way. This is one reason why I felt there were too many twists and turns that even the writing couldn’t keep up with.

– In the side story, Ryan, Jenny and Espo were supposed to go on a trip together, but since Espo isn’t with Lanie anymore, they now need a 4th person to go with Espo. Ryan and Jenny set Espo up with someone on match.com, creating a profile for him, which upsets Espo who says he can find his own dates.

– I did enjoy the amount of time spent in the kitchenette. Since they weren’t working on an official case, they kept a lot of their investigations before it was an official murder to the more social areas of the precinct, even in Gates’ absence.

– Kate was very wonderfully affectionate towards Castle this episode, lots of snuggling. He was going through a lot so it was nice to see her be so supportive. Not that she isn’t typically, but it was more noticeable here.

– The actress who plays the lawyer, Haskins, also plays a recurring character on the show Arrow. Her character on that show works with a special division called the Suicide Squad. Looks like her character on Castle was also looking for suicide squad recruits.