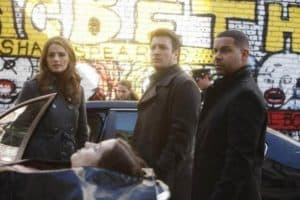 How very, very sneaky of The Powers That Be.

For weeks they bombarded us with information about Ryan’s wedding and the upcoming noir episode and had everyone talking about both. They made us — at least it worked on me — forget all about this week’s episode and focus on the other two. The only information we had was that the mayor of New York City, Robert Weldon, who happens to be a close friend of Castle’s, would be implicated in a murder investigation. That was it.

Nothing prepared us for the intense hour that graced our televisions on Monday night. I admit that, having watched the episode twice already, I am still scratching my head at what exactly happened. Somehow, this one case that at first seemed to only put Castle and Beckett at odds — but not as intensely as I thought it would be; more on that in second — suddenly turned into this giant avalanche of vague information about the conspiracy that surrounds Beckett’s mother’s murder and, by the end of the episode, I was staring dumbfounded at my screen wondering just what exactly was set in motion, especially with that last scene.

This mysterious guy — let’s call him Mr. X for clarity’s sake — who seems to have a deal with these powerful people that apparently have control of what happens in New York, claims that Beckett is safe, but only while Castle is around to protect her. And by protecting her, he means keeping her from digging into her mother’s case. So the whole murder investigation this week was nothing but a ruse to frame Mayor Weldon and keep him from running for Governor as he had planned. If he ran for Governor, he would no longer be Mayor, which would automatically end the deal Castle had to an all-access pass to the 12th Precinct. So if Wheldon remains in his current position, Castle’s place in the Twelfth is safe and so is Beckett.

Confused yet? I know; so am I. 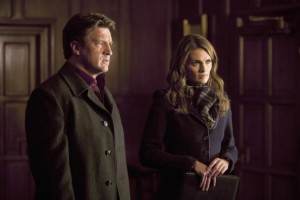 What I don’t get is what Mr. X’s motivation is and I am still not sure if he is a good guy or a bad guy. Whoever he is, he has access to these powerful people or he is one of them. I think it was pretty clear to everyone that we should look at this whole conspiracy like it’s a game of chess. While I am not exactly a chess person — never bothered to learn — I know it is all about strategy and sometimes sacrifice. It seems to me that everyone who has been killed so far, including Johanna Beckett and Captain Montgomery, were nothing but pawns in a bigger, more complex scheme.

It all seems very interesting and mysterious, but I hope it doesn’t become so complex and convoluted that we won’t even care about it by the time it’s over. That said, it was really great to watch how amazing the character development in this show is. From Castle and Beckett’s relationship, to the boys and even Gates, TPTB have done an outstanding work at developing these characters and make them grow over time. I think one of the biggest examples we can take from this episode is that scene when Castle begs Kate to wait for another lead, but she says she doesn’t have any choice. When you compare it to last season’s big fight scene in ‘The Final Nail'(which was basically the exact same argument), it is so clear how far they have come. Even their fight this time around was more subdued and they laid more cards on the table. A year ago, I seriously doubt Kate would be so upfront about not wanting to do it, admitting that she knew what was at stake (and admitting that she was afraid to lose him as well, even if she didn’t say it out loud). 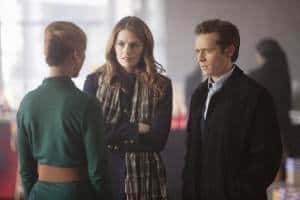 Another point that absolutely loved was Beckett’s interaction with Gates. It is no secret that I haven’t been a Gates fan since she was introduced in the season 4 premiere, but you know what, she’s slowly growing on me. I particularly loved that scene that she tells Kate about her dad being a cop and how she cares about them, but she needs to get her job done. Ryan and Esposito were pretty great as well, supporting Beckett when she needed to make a tough decision.

Once again, I didn’t particularly care about Martha or Alexis and I think they are both being ridiculously underused.

All in all, ‘Dial M for Mayor’was very, very good, even if it didn’t make it to my favorites list. A-