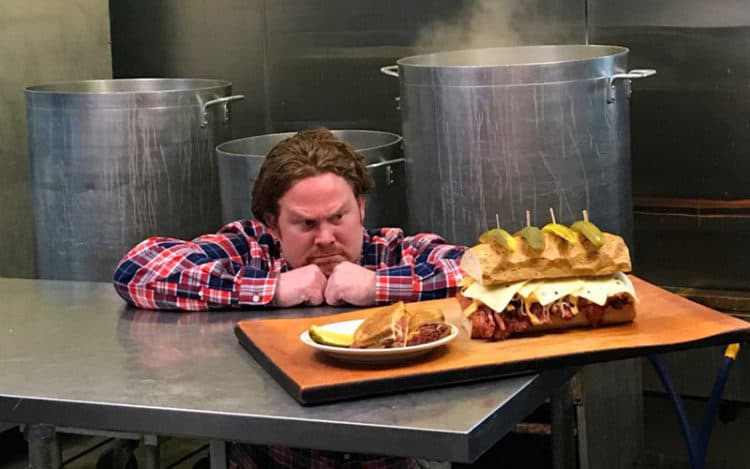 If you don’t recognize him by his name, you know Casey Webb by his face. He’s been the host of “Man v. Food” since 2017, and he’s been killing it. He’s got a love of all things food related, and he’s not afraid of sharing what he knows, what he likes, what he doesn’t like, and how he prefers to live on his show. He’s someone people adore, and he’s really changed the game for the better since he took over the show during it’s fifth season on the air. If you’re a fan of the show but you find yourself wondering a bit more about who Casey Webb is in his real life, you are not alone. We think you might just appreciate getting to know him a bit more with these fun facts about his real life.

1. He Knows the Restaurant World

Before he was asked to host this show, he was part of the restaurant industry for a long time, and he’s very familiar with it. He was once a dishwasher. He’s been a bartender. He’s been part of the industry since he was a child living in New Jersey, and that helps him with his current job. When you know the industry and all that it entails, it brings a certain element of knowledge to the game.

2. His Favorite Part of his Job is the People

Aside from food, which he does love, the most exciting part of his job on this show is to meet new people. It’s an everyday occurrence for him, and he loves it. He loves to walk into a new place and meet new people. He loves to hear their stories and to see their lives, and to get to know them each day. Every single day is filled with new people he gets to learn more about, and he is a big fan. He also like the people he gets to work with, too. We imagine that makes things a bit easier and more enjoyable for him when he’s showing up to do the job.

Would you believe that until he began filming this show, he’d never been to New Orleans? Now that he’s been there, he’s fallen in love with the food culture in the city. It’s so diverse and flavorful, and we know that it’s hard not to love what you find in this southern city. He’s never been until now, but he’s been back more than once to enjoy the restaurant scene and the culture the comes along with it. Can you imagine having never had a beignet from the world’s most famous beignet restaurant?

4. He Believes in Cheerleaders

As a person, he’s a big fan of cheerleaders, though we are not talking the rah-rah type, per say. He’s a big fan of having people in his corner to cheer him on, and he thinks that anyone looking for successful and fulfilling lives needs someone in their corner to cheer them on, support them, and be there for them on good days and bad. He believes in personal cheerleaders, and we have to say that we think he’s in the right about this one.

5. He Believes Cooking Should be Joyful

One thing that Casey Webb feels is true of life is that cooking should be a joyful experience. Too many people consider it a chore, and a thing that must be done even when you don’t really want to do it. It’s a thing that he feels should be savored, enjoyed, and you should take your time doing it. It’s a passion project each and every time, and we like that. We are going to try and apply that in our everyday life from now on. We’ll let you know how that goes.

Before he took on this role, he was an actor in a few films and shows. Not one of them was famous enough that most people would recognize it, but he did land a few roles that got him a start in the industry. However, this was not even the first time he was out in the public eye, either. He had a childhood job before his acting career that was a bit more lucrative.

Yes, he was a child model. He was a big star when it came to modeling winter clothing. He was the kind of kid you’d see modeling snow hats and scarves, and other knitted garments for those who were spending a bit of time somewhere cold. He did his best to make a go of this for himself, but his modeling career did fizzle a bit as he got a little older and moved on to other exciting new projects.

8. His Parents are Divorced

When he was a child, his parents decided that their marriage was not working out for them. They were not fans of being with one another, but we understand that this does happen from time to time. They ended up splitting up while he was still young, but he remained close to both of them. In fact, they remained close to one another and have a good relationship with one another. We love that when couples get divorced by stay close because of their kids. It is so good.

He’s very active on Instagram, but who isn’t these days? We know he’s got an account he likes to share on, and he’s very fond of family photos, work photos, and food photos. You can see he likes to travel, and he really likes to be funny. We got to know him a bit going through his social media accounts, and it was kind of fun.

As far as we can tell, Casey Webb is a single man who is not ready to settle down and do the serious marriage and kids things. Or, maybe he is that kind of man and he is ready for that, but the right woman hasn’t come along yet. She’s probably out there looking for someone who loves to cook, who wants to travel, and who has a sense of humor.