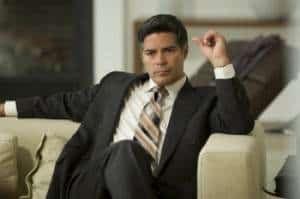 The return of Caprica was one that saw all our players making moves to either solidify their power or gain it back, whether that meant selling one’s soul to the Taurons or convincing The Holy Mother that perhaps a virtual heaven is as good as the afterlife is going to get.

Daniel Graystone (Eric Stoltz) and Clarice (Polly Walker) are both traveling down dangerous, parallel roads towards playing God, whether it’s in the service of one’s grief or one’s glory. So it was a clever structure in 1.10 to allow us to see these analogous journeys so clearly. Each path required a blood sacrifice. Each path pushed our characters further than they have had to go before. And where one (Graystone) envisions a world without the need for grief, the other (Clarice) envisions a world without the need for faith.

Caprica’s challenge at this point is trying to navigate the issues it raises without coming off as obvious or heavy-handed. Sometimes it succeeds, sometimes it fails. Caprica’s first effort back was a little of the latter. The stakes have to remain personal for us to care. We need more than simplistic fundamentalist fervor. Otherwise all the rhetoric grows tiresome. The show risks isolating its audience from two of its main characters, Clarice and Lacy, unless we understand more about what makes the One True God, well, Godlike. If it only serves as a bloodthirsty analogy to modern or historical religion, then we’ll never connect to these characters because they come off simply as power hungry or naive. In other words, shallow. We need to know why this particular God and religion means something to them. We don’t have to like them. But we need to understand why they go to the lengths they do.

There were some nice misleads in the episode that kept us off-balance or guessing, from the holoband terrorist attack to the Amanda Graystone (Paula Malcomson) reveal. I was never a big fan of Amanda’s, but the possibility that Daniel may now be in on her allegiance with Clarice adds a lot of juicy possibilities. Of course, it could be possible that Daniel has no say in this at all and that Clarice is simply using Amanda for some devious purpose down the road.

Now that Lacy (Magda Apanowicz) has failed in her mission to bring Zoe (Alessandra Torresani) to Gemenon, it’s hard to figure out where her storyline is going. It still seems like she’s far too eager to prove her allegiance to STO, almost like she’s still playing at something. But what?

Finally we got to see Zoe act like the badass we knew she was. A wonderfully choreographed scene that revealed Zoe’s powers to be rather Messiah-like. This new direction, however, risks making New Cap City a little too Matrix-like. And if Zoe or Tamara can’t die, where are the stakes for either of them?

Caprica is still one of the few shows that dares to ask the kinds of brave philosophical questions that make for great science fiction. Even if it sometimes comes off as a bit wonky at times, last night’s episode continued to make us think. If there was a way to keep someone you loved alive as a virtual soul, would you do it? Or is the process of grief and moving on not just the Tauron way, but a key to preserving the very essence of what makes us human? Let us know in the Caprica forums.