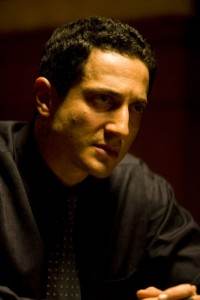 Last night’s Caprica gave Sam Adama, the thuggish brother of Joseph Adama, time to shine as he got his first story line to display how far he will go for his Tauran roots. Meanwhile, Daniel works on tweaking the Grace program and Amanda continues to get in good with Clarice’s family to suit Agent Durham’s needs.

Amanda continues making her attempts to get to know the House of Willow by befriending the so-called head of household Marebeth, who is pregnant and planning a water birth. She is a complete and utter wench to Amanda, which would be valid if she truly knew Amanda’s intentions. Her cold demeanor comes from Amanda being “Terror Mom” to Zoe, which she feels will bring danger to her family. The ‘true’ head of the Willow household, Clarice, stands by her faith in Amanda and tells Marebeth that it’s best if she did the same.

While the power struggle continues at Casa Willow, Amanda meets with Agent Durham who tells her time is running out and any information on the Willows will be of some help in the investigation.

When Amanda gets back to the house, she is shocked that Marebeth is throwing her out due to questioning Marebeth’s birth methods. This is clearly why Clarice is the leader, because anyone could tell through that lie that Marebeth hates Amanda and just wants the woman out of her house. Amanda, not to be deterred, gives a postpartum depression sob story about how she wishes she can be in Marebeth’s shoes and experience actually wanting a baby since Zoe was actually a mistake. Wow.

Marebeth lets Amanda stay and help in treating the baby after the birth. While Clarice gives a prayer over the newborn, Amanda returns to Agent Durham who asks how did she get back in with the Willows.

Daniel has a nice breakfast discussing his latest issue tweaking Zoe’s program with Amanda. Wait. With who?! The sunny exterior and Amanda’s miraculous recovery from her limp was all I needed to know that Amanda was a hologram avatar, which Daniel is using as a prototype to help perfect Zoe’s program. Unfortunately, time is running since the Guatrau wants the program up and marketed soon and has already had a commercial done without Daniel, but using Daniel’s avatar in place of it.

Later Daniel tries again to use the Amanda avatar to remember things on her own through Daniel and Zoe’s old journals. After some prodding, Amanda 2.0 remembers an event that wasn’t logged in the journals, which is a breakthrough in his research.

At Graystone Industries, Cyrus brings to Daniel’s attention the Ha’la’tha adding a third shift to the company’s schedule and disappearing merchandise, which means that they are bleeding money from Graystone Industries. Daniel orders Cyrus not to say anything to the mob, but to install cameras to catch them in the act.

Daniel runs into Joseph Adama and ponders how did he get in the position he’s in now and yearns to get back to the man he was pre-bombing. Joseph smoothly advises that Daniel needs someone who knew him when he was that person to help resurface the attributes that Daniel wants back. Daniel asks Joseph if his wife was his person to do just that, and Joseph answers she was until Zoe blew her up. Ouch!

Daniel talks with Amanda later that night at their house and decides to come clean about the atrocities he’s committed as of late. He claims that losing Zoe put him on the path of destruction and ends it with killing Vergis, which he really didn’t do. After he’s laid out “the truth” to ‘Amanda’, it is revealed that Daniel is talking to Amanda 2.0 again and the conversation begins to go down hill when Amanda 2.0 forgives him for his actions, which is something the real Amanda wouldn’t do. He angrily shouts at the avatar for saying “I love you”, which is impossible to Daniel, because it is incapable of loving anyone. Frustrated, Daniel exits the program to find out that his breakthrough was not up to par, in more ways than one. Back to the drawing board, Daniel… 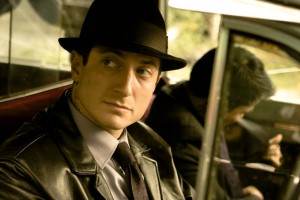 Sam Adama is highly upset with the civil war happening on Tauron, which has his husband Larry worrying about Sam’s life. Why is that? Because Sam has been not only sending more money to Tauron, but he’s also been sending guns to help in the war over there as well. Meanwhile, Joseph is back on his feet due to the help of his secretary Evelyn, which Ruth takes note of and pushes Evelyn to snag Joseph while she can.

Sam and another Ha’la’tha member are about to transport more guns to Tauron, when they are ambushed by another Tauron gangster who is the only person in the gun trade business. After killing Sam’s accomplice, the thug sends Sam running back to the Guatrau. But Sam is shocked to find that the Guatrau wants no part of this and pretty much says that Sam must deal with this mess on his own by the end of the day. Uh 0h…

Sam runs to find Joseph, but finds another tough ally instead. As the thugs party it up in their hotel suite, Sam sends a Cylon droid to decimate the party before taking pleasure in killing the head thug himself.

Later, Sam tries to explain to the Guatrau how the Cylons would benefit their people back home, but the Guatrau is not hearing it, because what’s going on in Tauron is not affecting him on Caprica. He reminds Sam of what the Ha’la’tha stands for (which is basically “from the ground”) and informs Sam of how much his obsession of maintain the old culture is hindering him from thinking straight. I have to agree with the Guatrau on this one.

A solid episode which showcased the first ever use of a Cylon in the field of “battle, which was basically an one armed fight all day long. Glad to see Sasha Roiz shine last night and equally glad to see Joseph moving on from his mourning and embracing life through the arms of Evelyn. I’m kind of worried about the entire “Guatra controlling Graystone Industries” bit, because it can end just as badly as it started. Nothing good ever comes out of embezzlement, so I wonder who will fall in the end… Daniel? Or the Ha’ la’ tha’? Enquiring minds want to know…