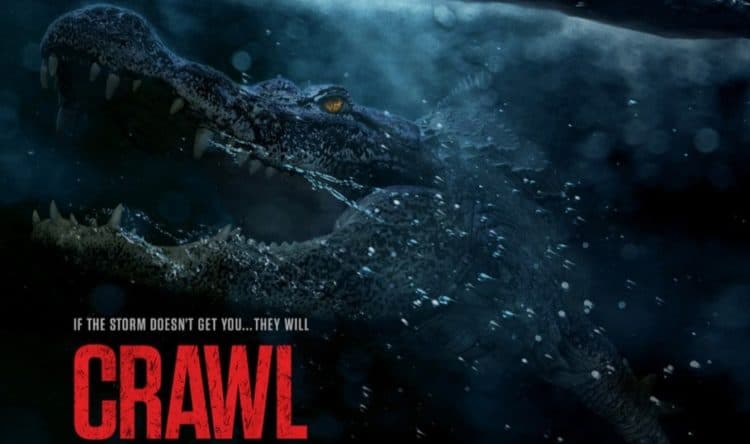 As you might imagine I had to think about this one and rub my eyes a bit to really get into the swing of it. There have been some bad, terrible, downright HORRIBLE alligator and crocodile movies throughout the years and all of them have several things in common. One of those is that they just seem to abandon the overall story line for the simple joy of scaring the living hell out of the audience, thereby making sure that people will remember the jump scares and the gore that might come as a result of a person reaching carelessly into the water when there’s an alligator about. There are some things they get right, such as the speed and the vicious nature of animals that can be extremely opportunistic, like the alligator. While alligators don’t normally hunt humans they will attack if given the opportunity or if they’re provoked, pretty much like many other animals. But the fearsome look they possess is one reason why they make a very enticing horror monster.

One thing that seems interesting about this movie so far is that it doesn’t seem to have a very wide range since the main part of the story seems to take place in the house where a young woman finds that her father has been attacked and left unconscious, still alive. Gators and crocodiles are kind of interesting in that if they can’t eat anything in one bite or eat it whole then they’ll tend to leave it to rot so that they can rip chunks off of it later. From the trailer though it almost seems as though the father was left there to rot, or as bait. That would indicate that there are ‘smart’ gators in this film and that would be a serious backward slide if that’s the case. Staying optimistic though and giving it the benefit of doubt, let’s say that the gator was leaving it to rot and then attacked the daughter thinking that she was threatening its food source somehow, that would make a lot more sense and it would seem a little more realistic. The truth is that gators tend to swim away quite often when approached by humans, unlike crocodiles which are known to be a little more vicious.

Then there’s the name of the movie the think about, “Crawl”. Looking at the trailer it doesn’t seem like there’s a lot of crawling going on unless they’re talking about the humans, since alligators tend to sprawl and shimmy their way along, though some people might like to say that this is a crawl. That’s one point that can be let go relatively easy since it’s not all that important. But then comes a few scenes that seem to be common staples of the horror movies we’ve grown up with and are used again and again. A deputy leans over an opening that leads down into the water and is snapped up by an alligator when he looks away. The heroine is in a shower stall that the alligator can’t seem to break through, and those that come to help are torn apart by the alligators that have now infested this house and the streets. It sounds about par for the course when you really think about it since so many horror movies rely on the most inane actions of the cast in order to make certain moments work and the jump scares affect the audience to the greatest degree. But really, how does anyone keep falling for this formula?

According to Clark Collis of Entertainment Weekly it would seem that the trailer has already gone viral thanks to a clever marketing strategy, and well over a million views and counting have been tallied. It’s not too surprising really, people love a horror movie whether it’s good or bad and are usually willing to give it a chance to see what it can do. At the very least the movie is following what might actually happen during a natural disaster even if it is a bit jumped up and possibly elevated to the absolute worst-case scenario. At least the alligators aren’t super-intelligent or the size of a small school bus, so there’s some hope for it. The only thing that could possibly derail it within the first half hour to an hour of playing would probably be the decisions that the writers add into the script. Dialogue, character development, and progression of the plot could derail this thing, but let’s hope for the best and think positive thoughts that it might be one of the best alligator movies that’s come out in a long time. The bar isn’t all that high to start with to be honest, so at this point they don’t need to shoot for the stars. They just need to keep their heads above water and it should do fine.