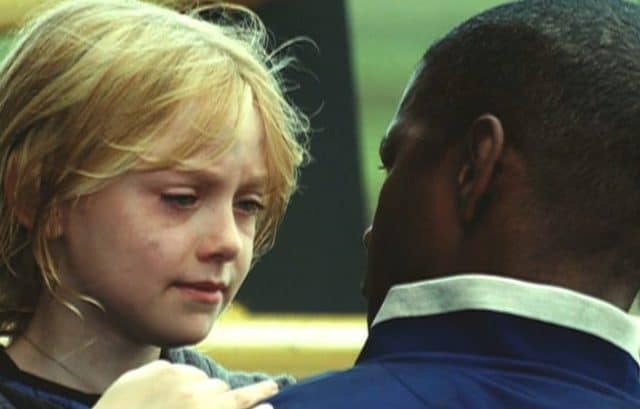 Kidnapping scenes in movies can be tough to watch particularly if they happen to involve actual kids. You have to wonder how lightly the kids have to be handled in order to not scar them for life even if they know they’re acting. This kind of thing is after all very traumatic as a child or even an adolescent might not fully understand the ramifications since it wouldn’t be wise to use a child that’s already gone through this kind of ordeal. Thus it becomes a bit of pressure to make the scene as real as possible without seriously messing anyone up psychologically. Such movies aren’t always easy to take simply because the subject is one that a lot of parents feel that they would handle in different ways.

Thankfully most likely wouldn’t stop until they had their child safely in their arms.

You can condemn him or commend him for how calm he is while his daughter is being taken, but Liam Neeson is at least on top of things since he knows how this is going to go. He knows that she’ll be taken, and he knows that he will hunt the kidnappers down without remorse. I think a lot of dads would agree with his sentiments and might very well, if capable, go on a manhunt if their kid was ever taken.

This is what happens when dumb, entitled kids try to stage a kidnapping. Not only do they manage to gain way too much attention for taking the kid in the first place but they also allow him to live it up like it’s a giant party. It’s one of the worst kept secrets ever in a movie and it’s one of the hardest deaths to watch since the kid was thinking that his kidnappers were his friends.

How in the world would you feel if you demanded to see your son and the next thing you hear is a gunshot? Your heart would become an empty pit inside your chest as it dropped into your stomach, that’s how. To think that you’d just signed your kid’s death warrant with your careless words would be the absolute worst feeling that any parent could possibly endure.

On the other end of a kidnapping is the fact that some people can take the interrogation of the supposed kidnapper too far. If the guy isn’t talking after having his face beaten to a pulp there has to be a reason why. But most parents might not even think of it this way. They might think that he’s holding out on them and keep pummeling the poor kid.

Okay, hands up, how many people would want to go off the hook like Denzel and let the kidnappers know they’d messed with the wrong kid? If your hand isn’t up you either don’t have kids or are far more reliant upon the legal system than others. It would be tempting if only for the fact that the justice system moves way too slow at times.

Kidnapping scenes aren’t meant to be easy in films, but some of them are very good at pulling forth the most protective and powerful emotions.