Home
Television
How Can an Impractical Jokers Season 6 Even Exist? 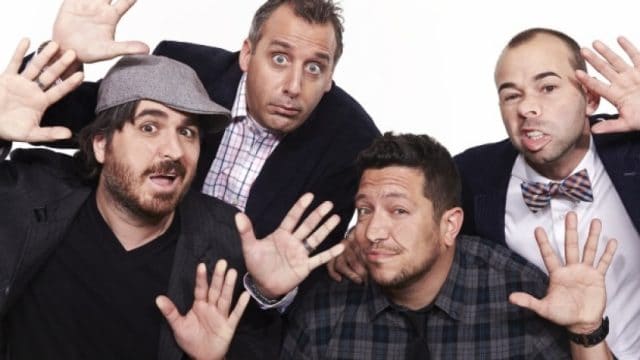 Last night was the season 6 premiere of Impractical Jokers, a show that covers the lives of Joseph “Joe” Gatto, James “Murr” Murray, Brian “Q” Quinn and Salvatore “Sal” Vulcano who get to hang out and torture each other for a living with mischievous challenges and prank punishments.  I’ve written about this show before when it was a novelty.  It essentially combines the elements of a hidden camera show with that of “real life.”   I always thought of it almost as a “live Jerky Boys.”  The brilliance of this show lies in the fact that it’s completely authentic.  The guys have mics in their ears and have to do what the other guys tell them to in real-time.  It’s hilarious.  Here’s a highlight clip so you know what I’m talking about:

Here’s the issue though. The show is in season 6. When it first started no one knew who these guys were. They’re a group of guys from Staten Island and they would do all their bits in New York City and Brooklyn. What made the show so funny was the fact that no one knew who these guys were. I would say that even through season 3 they were still a bit of a novelty. But at this point you’d have to think nearly everyone in New York knows who they are. So how can the show be authentic anymore?

The guys have traveled to other states and even other countries but there’s no question they are 100% known right now. I suppose that because what they do is “on the spot” there’s still interest in the show, even if they’ve gained popularity. Still though, it just seems a little weird. It’s kind of like Billy on the Street, another product of TruTV. In the first season it was hilarious watching Billy Eichner harass people on the streets of NYC. But at this point, five seasons in, people probably WANT to get harassed by him because he’s famous.

I’m still a fan of Impractical Jokers but at what point is this going to stop?